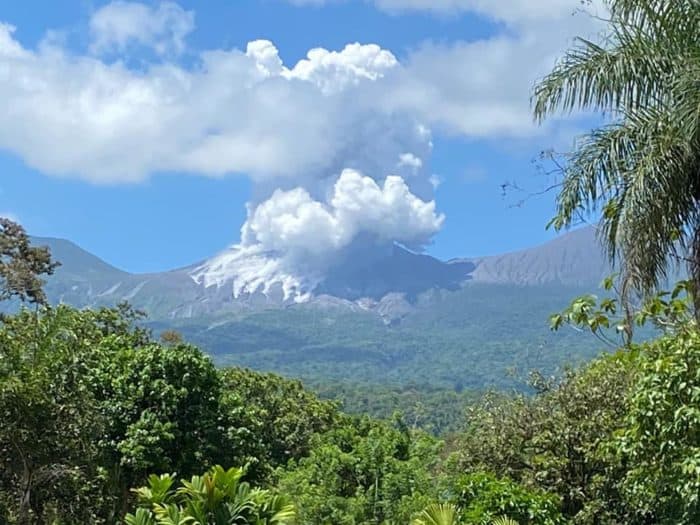 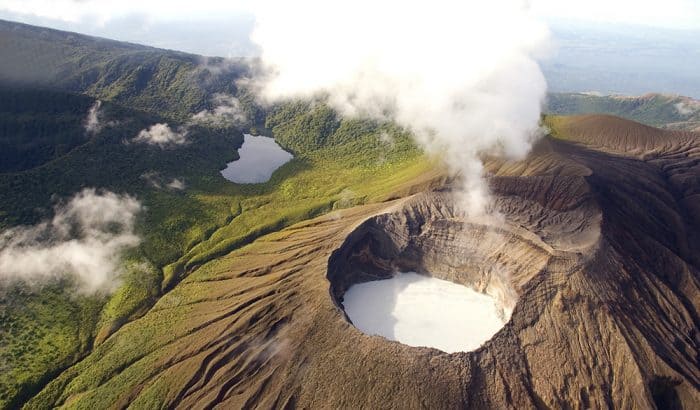 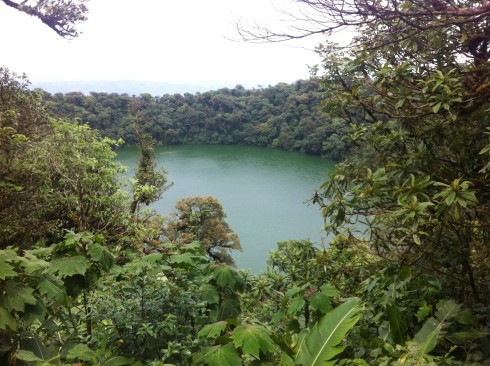 CERRO CHATO, Alajuela – There’s a lot to do at the base of Costa Rica’s most famous volcano, Arenal, but you can’t climb it, at least not legally, and some people have died doing it anyway.

However, you can climb a volcano right next to it, and it won’t kill you, though it may kick your butt.

Cerro Chato — “Flat-Top Hill” — is a dormant volcano just southeast of Volcán Arenal that has been inactive for an estimated 3,500 years, with a green crater lake at the 1,140-meter (3,740-foot) summit. It’s well worth climbing, even if you’re not the kind of person who ordinarily climbs volcanoes.

Two trails lead to the top through lush rain forest — one on the western side, starting at the Arenal Observatory Lodge (admission $8), and one on the eastern, starting at La Fortuna Waterfall (admission $11). While the latter is steeper and harder, both are fairly strenuous, but doable by the average person in two to four hours.

I climbed Chato with a retired couple from California named George and Jane McMackin — whom I nicknamed “George of the Jungle” (he was about to turn 70) and “Me Jane” — plus a Tico guide named David Barboza who had admittedly never been here before.

George said he had recently taken his 8-year-old grandson to a Tarzan swing in Monteverde, where the boy was asked if he was ready for a 44-meter (145-foot) free fall. The boy said, “I’m not sure,” and the guide said, “Too bad,” and pushed him off the ledge. Welcome to Costa Rica, kid.

The $8 we paid to get through the gate of the Arenal Observatory Lodge was cheaper than admission to the Arenal Volcano National Park ($15), and Barboza said the hiking here was even better.

After a stroll through the lodge’s beautiful gardens, we walked down to the powerful Danta Waterfall, where the mist cooled us off nicely, then crossed the 60-meter (180-foot) hanging bridge over the Río Danta.

At the base of Cerro Chato (where a coatimundi, the long-tailed raccoon relative, was begging for food), a sign advised that it was 1,540 meters to the top, almost a mile. It was a very steep mile, but a good trail, often with foot-sized holes in the ground like crude steps. The trail ascends from lowland rain forest into cloud forest, and the trees are studded with epiphytes, plants like orchids that grow on trees.

Jane, who has climbed several 4,000-meter (14,000-foot) mountains in Colorado, recalled later by email: “Rather than switchbacks, which take you up the mountain gradually, this trail was straight up, pocked with trenches and roots ready to send you tumbling. We looked for trunks and branches to grab hold of to pull ourselves up and over these obstacles. Our legs were like putty by the time we reached the top.”

The reward is a stunning view of the emerald Laguna Cerro Chato, surrounded by dense foliage. A very steep, very muddy but short trail leads down to the lake — here the hike becomes more of a climb, with all fours needed, but it’s fun if you don’t mind getting muddy. Some advise against swimming in the lake for some reason, but plenty of people do it.

A sign at the summit points the way to the La Fortuna Waterfall, saying it’s four hours away, though this hike can reportedly be done downhill in one hour. If you can figure out the transportation, the ideal way to hike Cerro Chato would be to walk up one side and down the other.

But we had cars to get back to, so we walked down the same way we walked up. Actually, I ran much of the way, doing my own improvised version of downhill jungle parkour.

Back at the lodge, we rewarded ourselves with beers, sitting on the deck watching fabulous, golden-tailed oropendolas feed on watermelon and bananas at bird feeders equipped with upside-down cones to prevent coatimundis from climbing them.

And yes, there were four frustrated coatis prowling around the bottom.

“I have new friends and memories,” said David, the Tico tour guide who had never been here before. “That’s the real value of an adventure, that you remember it so fondly.”

Getting there: From La Fortuna, drive west on the main road, Highway 142, and turn left at the brown sign pointing to “Parque Nacional Volcán Arenal.” Drive past the entrance to the park, go left at the T, and keep going straight or left until Arenal Observatory Lodge. Or to climb Cerro Chato from the east, just head to the popular La Fortuna Waterfall and ask for directions.