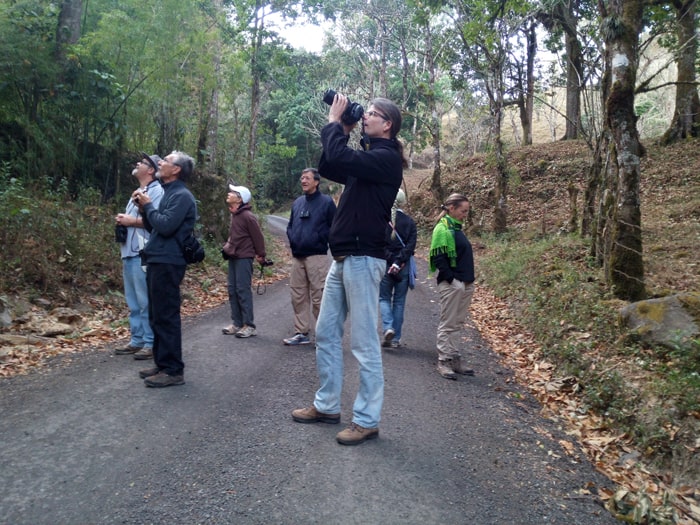 Now you see it, now you don't: Hopeful birders on the road in front of El Toucanet Lodge. (Karl Kahler/The Tico Times)

COPEY DE DOTA, San José — I had already decided our quetzal quest was a bust, and I wished the guide would give up so we could go back to the lodge and eat breakfast.

And then, after nearly two hours of peering into distant treetops, two resplendent quetzals flew right between me and a house, just a few meters away from the road where I was standing — close enough that Peyton Manning could have hit them with a football. “Right there!” I shouted (trying not to shout). I was briefly unsure because the bird’s back was blue and I expected green, but there was no mistaking the male’s incredibly long tail. The bird was 2 to 3 feet long, and most of that was tail.

“That was a male and a female,” said our host, Gary Roberts, the owner of El Toucanet Lodge in Copey de Dota, in a region of Costa Rica where this “bird of the gods” is surprisingly abundant. Roberts leads the 6:30 a.m. “quetzal quest” just about every morning, and he said lately he’s been spotting them maybe 6 days out of 7. The quetzal, revered as divine by pre-Columbian cultures, is not considered endangered today but “near threatened.” Here they’re pretty easy to find, if you just stop long enough by an aguacatillo tree, where they love to eat the fruit.

Easier to spot at Gary’s lodge is the emerald toucanet, which as you might guess is green and smaller than regular toucans. We saw two fly past my terrace as soon as Gary led me to my room, and we saw another one the next day on our birding tour before we even left his property. I also spotted a bird I couldn’t identify with a long, curved beak, feeding its babies in the hollow knot of a tree.

I stayed at two lodges in the southern highlands in Costa Rica’s Santos region, as it’s known because of all the towns named for saints, to see birds and to remember what cold feels like. On neither account was I disappointed, though it didn’t quite get cold enough to wear my leather jacket. (But I did sleep under three blankets.) Copey de Dota is a town so small there’s almost no town there, though 15 minutes away is Santa María de Dota, a pretty, prosperous-looking town with a gas station, stores and at least one bank. Both towns are accessed from the Inter-American Highway south of Cartago, which can be a chilling adventure all its own, especially if you’re stuck behind a slow truck on the steep, curvy uphills.

The two big attractions in this area, Gary said, are bird-watching and coffee tours. He said the Coopedota coffee tour in Santa María is actually somewhat famous. My room at El Toucanet, one of eight, was in the style commonly called “rustic elegance,” with lots of cypress wood but few new-fangled amenities like TVs, phones or (completely unnecessary) air-conditioning — though it did have excellent in-room Wi-Fi, a rarity in these parts. There was hot water, in both the sink and the shower, and the view of the green mountains from my terrace was divine.

My worst complaint was that the towels were scratchy, as if fabric softener has yet to be introduced in this remote region. Dinner was the house specialty, baked trout, which was delicious. Trout is a non-native species that was introduced here many years ago and is now abundant. Trout fishing is said to be one of the area’s attractions, but Gary said avid anglers wouldn’t find it much of a challenge.

I would recommend staying at El Toucanet for one or two nights, though beyond that you might begin to wonder what to do with yourself, as it lacks the extensive network of trails that some lodges offer. Highlights are the morning birding tour and dinner. After a sumptuous breakfast with a German couple watching hummingbirds, I drove to San Gerardo de Dota, about an hour and a half away, and checked into the Savegre Hotel Natural Reserve & Spa.

San Gerardo is not so much a town as a 9km road lined with ecolodges. Although there is a tiny convenience store (lacking a sign), don’t come here without anything you might need, including gas or cash. The Savegre Hotel had everything El Toucanet lacked, including a busy restaurant, an elegant bar, a fancy spa, extensive hiking trails — and busloads of tourists.

My room was sublime, containing two things I’ve never seen in a hotel room in Costa Rica — a working fireplace and a space heater. In another rarity, it also had an actual bathtub, with three candles romantically placed among pebbles in a trough alongside. Other amenities included a telephone, a digital clock, a hair dryer and a coffeemaker. All in all the room was quite elegant, with attractive wooden walls and ceiling, plus yellow, red and blue curtains and matching bedspread adding color to the otherwise brownish room.

I set out to do one or two of the hiking trails, which started with a punishing, 800m uphill slog on a gravel road that made me think I really need to get in shape. The worst part of the hike was not the elevation gain but the insects that constantly buzzed around my head. I couldn’t identify them — they were small like flies but had a buzz like bees, and fortunately they didn’t sting, but they were fascinated by my face, like some exotic insect species that had evolved solely to harass solitary hikers.

So as I hiked, I almost constantly fanned the air in front of my face, as if waving away a bad smell. To avoid sucking the bugs into my mouth I tried to breathe in through my nose and out through my mouth, but when I sucked one into my nose, that was even worse. A couple of times, these bugs flew straight into my eyes. On flat stretches, I tried running to escape them, but they always caught up.

I finally reached a sign that pointed out the three trails here, and I debated between easy (45 minutes), medium (1-2 hours) and masochist (4-5 hours). Because of the bugs I was tempted to go with easy, but I didn’t want to be a wimp, so I settled for medium. La Quebrada Trail was beautiful and haunting, but unfortunately the bugs knew about it too. It was a 2-foot-wide path expertly carved into a sloping hillside, with dense foliage all around, and occasionally stunning views of the mountainside below. Except for all the palms, it reminded me of hiking in the Santa Cruz Mountains of California from my old hometown of Los Gatos.

Afterward I sat with Greivin Valverde, manager of human relations and the front desk, and he told me that the hotel was established in 1983 (!) by the local Chacón family. They were guided and advised by a U.S. couple named Leo and Zana Finkenbinder of the Southern Nazarene University in Oklahoma, who first visited in 1982 and were astonished by the beauty of the old-growth forest and the abundance of birds here. The Finkenbinders persuaded the Chacóns to stop cutting down trees for ranching and agriculture, to let the forest regrow and to establish an ecotourism destination. In 1986, the two families founded the Quetzal Education and Research Center, headquartered on this finca, which set aside 200 hectares of forest for research projects by students and professors from the U.S.

Today the property has a 480-hectare private reserve, and the lodge has 4 stars from the Costa Rican Tourism Board and the maximum “5 Leaves” from the Certification for Sustainable Tourism program. It has its own sewage treatment plant, and many rooms are solar-powered. There’s a small museum displaying some of the birds and animals of the area, and right in front is the Savegre River, which I know from experience offers great rafting further downstream.

I knew I wouldn’t have time to visit them all, so I asked Greivin about other resorts along this road worth visiting. He mentioned the somewhat expensive Dantica Lodge, the Trogon Lodge (comparable in price to the Savegre), the less expensive Suria and Sueños del Bosque, and the very affordable Cabinas El Quetzal and Cabinas Valle del Quetzal.

And with that I had to wrap up the interview. It was almost time for 2×1 happy hour at the well-stocked bar, and no self-respecting journalist would want to miss that.

Getting there: Take the Inter-American Highway south from Cartago, watch for a bus stop and church at Kilometer 58 and turn right toward Copey de Dota. Follow the signs to El Toucanet. The road off the highway is mostly unpaved, but 4-wheel drive is not necessary.
Rates: $88 double for standard rooms, $132 double for suites in high season, with taxes and breakfast included. Rates 10% lower in low season.
What to bring: Warm clothing, binoculars, hiking shoes.
For more info: www.eltoucanet.com

Getting there: Take the Inter-American Highway south from Cartago, and at Kilometer 80 turn right toward San Gerardo de Dota. The 9km road is steep, hilly and mostly unpaved; 4-wheel drive is advisable but not essential.
Rates: $110-140 standard double, $130-170 junior suites, including taxes and breakfast.
What to bring: Warm clothing, binoculars, hiking shoes and insect repellent.
For more info: www.savegre.com

The Tico Times checked into both hotels anonymously and paid full price for lodging and meals.