Costa Rica: Seeing it again for the first time 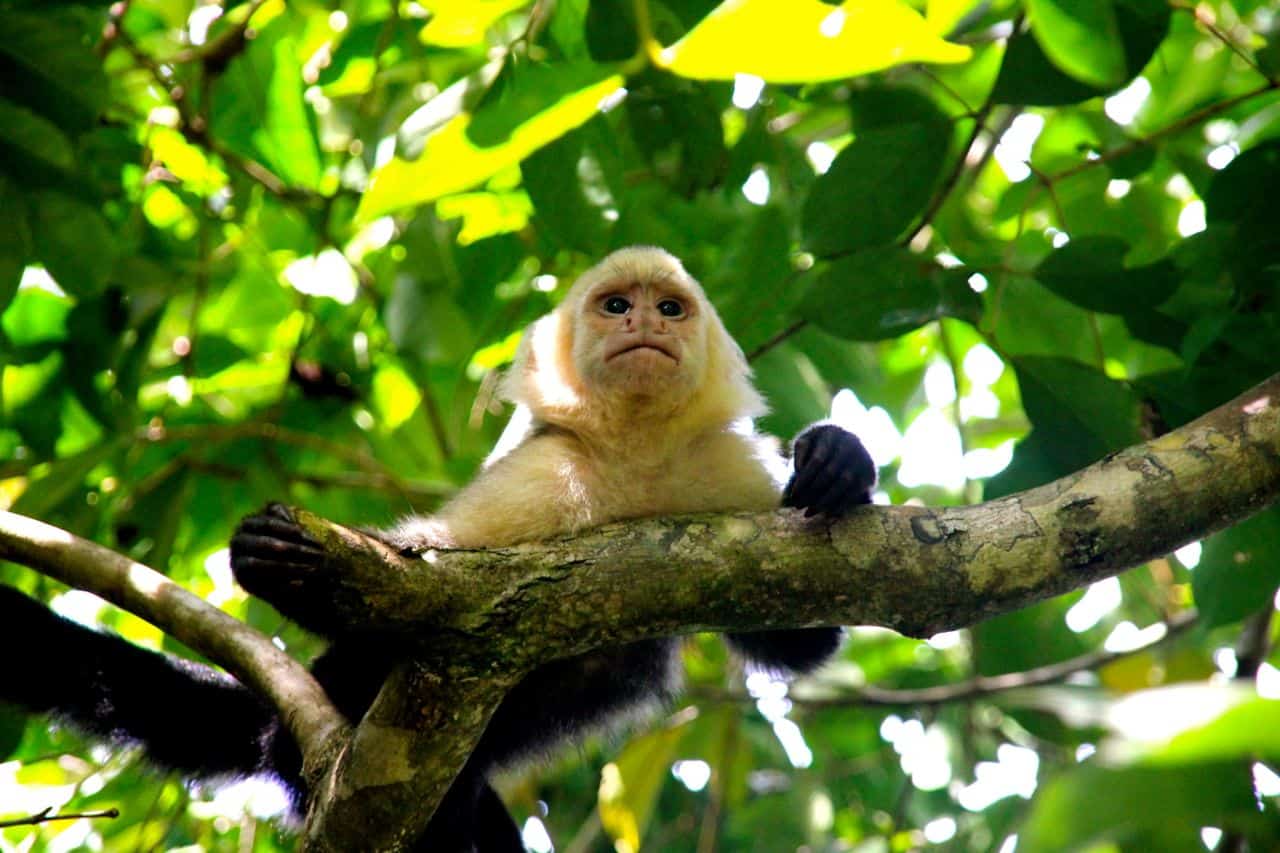 The monkeys leapt from branch to branch, then slithered down the bark. Their paws guided them, speedily pulling their lithe bodies in all directions.

My parents pointed and laughed with delight. My Mom pulled out her iPhone and inched forward, trying to catch a monkey in its frame. More monkeys appeared, leaping over each other, babies piggybacking on mothers, all them squawking as they went.

When our simian company dispersed, we continued down the path until we found a wooden tower. We climbed a staircase and arrived on the top platform, which overlooked Manuel Antonio National Park. The canopy was a hodgepodge of different trees. Diverse foliage mingled densely in the air, shining brightly beneath a radiant sun. Waves sloshed on the nearby beach. Hushed voices rose toward us from the tourists below.

My Dad smiled and nodded. My Mom squeezed my arm. The rainforest was beyond words – just as I had hoped.

“We were thinking of staying for two weeks,” my parents told me over Skype.

Understand, I would have been delighted to host my parents for two weeks. They could stay for months, as far as I was concerned. My parents are spectacular people. They’re smart, they’re fun, and they’re incredibly easygoing. The problem wasn’t them. The problem was what to do with them.

“The important thing as that we see you,” my Dad kept insisting. “We can do whatever you want. You know the country. We just don’t want to have to plan anything.”

I ruminated on this statement for months, trying to think of what we could do. For tourists, the point of Costa Rica is to do things. This is part of the reason my wife and I moved here. We wanted to hike mountain trails, zip-line through the jungle, paddle kayaks, and try surfing. Costa Rica is a tactile, three-dimensional country. Almost no foreigners visit to frequent museums or photograph themselves in front of famous statues. If my parents wanted to sit around and talk – which we usually do for hours at a stretch – we could do that anywhere.

Then I remembered one of my favorite quips. I have no idea who said it, but it’s a nugget of wisdom that has long intrigued me: Parisians never notice the Eiffel Tower.

That is, if you live in a place, you often forget what the place looks like to newcomers. Londoners never trifle with Big Ben or get excited about red telephone booths. Greenlanders don’t freak out about glaciers. Growing up in Vermont, I didn’t know that the Morgan Horse Farm was world-famous, or that autumnal leaves on gravel roads had sold millions of calendars. After spending a great deal of time in Costa Rica, I spend much of my day thinking about traffic circles and where to buy groceries, not the wondrousness of three-toed sloths.

“So what are we going to do with your parents?” Kylan asked one evening.

Triumphantly I replied: “I think we should go to Manuel Antonio.”

Ever since I arrived in Costa Rica, people have begged me to visit Manuel Antonio. The bite-sized national park is a reasonable drive from San José, the beach is a favorite destination, and everyone loves the wildlife. Yet we had never visited, because it seemed so obvious. It’s the strange paradox of living somewhere: If you always could visit a local attraction, you almost never do.

We spent two nights in Quepos, that seaside town next to Manuel Antonio, and from there we indulged every touristy impulse. We fed my parents fish tacos from the local Mexican restaurant. We ordered popsicles at a roadside kiosk, then lay on the beach and splashed in the ocean waves. We devoured burgers at El Avión, the famous restaurant built around a U.S. cargo plane. At the Tarcoles River, we parked the car and walked along the highway bridge, where my parents got to see the bask of crocodiles sunning themselves below. After taking some snapshots of the man-eating reptiles, we ordered a pair of pipas and drank the coconut water. The thing about my parents is that they really don’t need much to occupy themselves. My Dad is a retired grade-school teacher and my Mom is a psychologist. Pretty much everything is interesting to them, and they respond to nearly all stimuli with probing questions. On a run-of-the-mill stroll from our apartment to Avenida Escazú, my parents kept stopping to admire the plants in local yards.

“I think this is what we have in the living room,” exclaimed my Dad, gesturing to some stiff-leafed bush.

My parents are avid keepers of houseplants, and as we passed the wild-growing flowers and trees, they identified one familiar species after another. To most visitors, San Rafael de Escazú is a fairly boring suburb of cookie-cutter houses and chain restaurants. To my parents, every block revealed some startling floral discovery.

Day after day, I inundated with my parents with Costa Rican trivia. We walked through downtown San José, and I pointed out the Jade Museum, the Metallic Building, and the Antigua Aduana. We cut a cross-section through the city, eventually taking coffee at Kalú. I described Tico slang, told the story of Juan Santamaría, and described friends’ experiences with Dengue and food parasites. We drove to La Casona de Laly for comida típica, and my Dad tried his first refresco natural. When I mentioned ceviche in passing, my parents squinted confusedly, because they had never heard of the famed seafood dish. I made sure to buy some and giddily made them try a spoonful. (They liked it.)

On their final full day in Costa Rica, I drove our Nissan to Irazú Volcano. Not long ago, volcanoes were completely foreign to me. I had never imagined living in a country full of metamorphic mountains. We had our choice of volcanoes, but Irazú is among my favorites. Our car revved up the long roads, curving with the slopes, and the Central Valley receded behind us. Soon Cartago was a splash of gray beneath a row of alpine peaks.

My parents are worldly people. They both hold doctorates; they have both lived and taught in China. They designed and built their own house in the woods. My Dad is a skilled mariner and recently finished constructing his own sailboat. My Mom is a licensed pilot and teaches students how to fly prop planes. They’re proud of their accomplishments, but they’re also painfully modest. They love to learn new things. And yet, given how much they’ve seen and done, it’s hard to impress them. For years, everything I’ve shown them has reminded them of something else. But when we stepped out of the car, they could barely verbalize what they were seeing. Irazú is a volcano that unfolds gradually; instead of a single cone, the mountain has several peaks and depressions, which bundle together toward the summit. Much of the mountain is a plateau of ash and pumice. We hiked to the highest point, and the range spread out below. A sea of clouds rolled over the escarpments. On the horizon, the mist opened in places to unveil distant massifs.

As we gazed down from a height of 3,400 meters, I remembered what it was like to visit Costa Rica for the first time. Palm trees and fumaroles were now familiar to me, but I could still recall a time, only a couple of years ago, when they seemed glorious and strange. The old adage is still true: Sometimes it takes a visitor’s eyes to really see where you are.