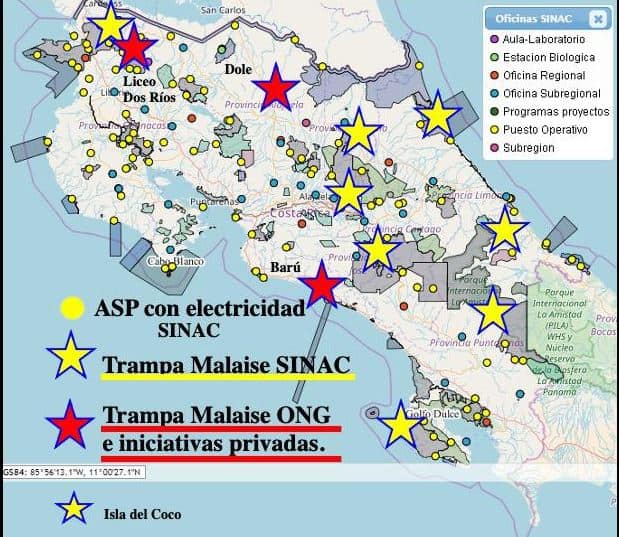 The Costa Rican biodiversity identification project “BioAlfa” received a $1 million grant from the Walder Foundation in Chicago, the Center for Biodiversity Genomics (CBG) of the University of Guelph, Canada (CBG), and a private donor from Canada.

With this donation, Bioalfa will be able to continue the study of all the insects collected in a year and will now be able to generate bar codes in order to keep an accurate count.

Rafael Gutiérrez, executive director of the National System of Conservation Areas (SINAC) states that this project was started in 2019 by SINAC in national parks and wilderness areas, with the help of the Technical Office of the National Commission for Biodiversity Management (CONAGEBIO), training park rangers and administrators in the technique of trapping and classifying insects in each place.

The traps are tents similar to a camping tent with an door open and each one can trap between 10,000 and 100,000 insects per year in an ethanol container

Hundreds of thousands of frozen insect samples have already been collected, but have not been able to be analyzed and identifed due to lack of funding. The cost of the laboratory process is $1 per insect and is carried out at the CBG of the University of Guelph, Canada.

All the information generated by the BioAlfa project will be added into the Biodiversity Knowledge and Information Management Platform, also declared of public interest to Costa Rica.

The Tico Times
Share
Facebook
Twitter
WhatsApp
Email
Previous articleOmicron hits hard in Europe, US and Latin America
Next articleUS Mega Millions jackpot jumps to $278 million and you could win it from Costa Rica!