Let’s play a game of spot the difference between two-toed and three-toed sloths to learn what makes them so unique.

Both species of sloth, however, have a very unusual symbiotic relationship with algae. They have specialized hair that encourages algae growth, this gives them a greenish tinge and helps with camouflage up in the treetops.

The main diet of both species is leaves; they are quite fussy and only eat the fresh, new, juicy leaves. However whilst three-fingered sloths are almost entirely herbivorous, two-fingered sloths are folivores, meaning they could opportunistically eat some animal protein.

A diet of leaves is not very nutritious, and sloths have to eat lots and lots of leaves to gain their energy. As a result, sloths have a very slow metabolism, this means they expend very little energy each day to survive. They move slowly, digest slowly, and only go to the toilet once or twice a week. Two-fingered sloths that also eat protein gain that extra amount of energy in their diet which allows them to have a faster metabolism and have the ability to move a lot faster than three-fingered sloths, but they still wouldn’t outpace a cheetah! 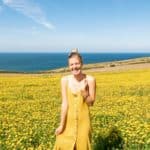 Katie is a 25-year-old Zoologist from the UK. She loves nothing more than hiking in nature with her camera in search of wild creatures. From cute and fluffy mammals to creepy-crawly insects Katie is fascinated by them all. After completing her degree Katie spent 6 months in Costa Rica working with the Toucan Rescue Ranch assisting with their sloth rehabilitation and release programme. Since then she has traveled the world photographing and filming wildlife using social media as a tool to teach others about the wonders of the natural world. You can follow her journey on Instagram: @show.me.nature.