If you don’t believe that sloths are one of the most popular animals around these days, you haven’t been paying attention.

Sloths are on T-shirts, hats, mugs, and a multitude of other items. At this time of year, even sloths in Santa hats start appearing on store shelves. Sloth tattoos of many varied designs have been etched indelibly on sloth lovers of all ages from all over the world. Here in Costa Rica, sloths are responsible for a huge boom in tourism. There’s just one problem: Almost every sloth being ogled at in popular culture is an ever-smiling three-toed sloth. 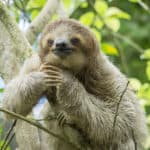 So, what’s the problem? The problem is that here in Costa Rica, we have two very different species of sloth. There is the hugely popular three-toed sloth, and also the very under-appreciated Hoffman’s two-toed sloth.

At this point, it is important to point out that ALL sloths have three toes. Hoffman’s two-toed sloths have three toes and two fingers, so not only are these poor sloths upstaged by their enigmatically smiling relatives but to add insult to injury, the individuals who gave them their name didn’t distinguish between their fingers and toes, forever sticking them with the confusing label of a two-toed sloth. For the sake of setting the record straight, they’ll be referred to as two-fingered sloths for the remainder of this article.

Now that we’ve cleared that up, let’s learn a bit more about these often-ignored sloths because they are pretty cool.

The most obvious difference is that two-fingered sloths have big round eyes, a cute pig nose, and are fluffy, with tan to brown, thick fur. They have large elf-like ears hidden in the depths of their furry heads. The skin around their nose is shiny and smooth, like an old worn baseball glove, and is normally dry but may bead up with sweat while they are sniffing the air for some tasty tree or just concentrating while pottying at the base of a tree.

If we look closely in their mouth, we will see not only four sets of leaf-crushing molars in the back of their mouth, like the other sloths have, but also four very sharp fang-like teeth in front. They are akin to staple removers and are used quite effectively when the sloths are threatened.

These razor-sharp teeth come in handy not only for defense but for munching on the many food items they might encounter. These are not your vegan leaf-eating sloths, like the three-fingered ones. They do love their leaves, but they also feast on various fruits, bugs, bird eggs, and the occasional lizard or other unfortunate critters that happen to be in their path at the wrong time. 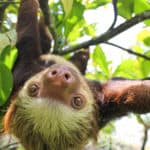 The reason that they eat so many varied food items is that, while they are sloths, they have a slightly higher metabolism than their three-fingered counterparts, and therefore have a higher protein and caloric requirement. All sloths have a very large stomach, which enables them to digest their food very slowly, allowing them to spend more time in the tree canopy and only lower themselves to the ground to eliminate, once a week or so. When they do so, they are very vulnerable to attack and sadly, dogs have become one of their biggest threats. While this type of sloth can defend itself much better than the three-fingered, due to having those incredibly sharp teeth and very strong, sharp claws, many sloths still lose their lives in this manner.

On a happier note, sloths have overall been very successful in the realm of survival. Their strategy of spending most of their time up high in the forest canopy and becoming one with the tree works well in a jungle rife with danger. Camouflage paired with being quite still is a great survival strategy.

Hoffman’s two-fingered sloths have fur that is very much like thick, luxurious dog fur. Algae grow in the hair shafts and various insects take up residence within this furry, green-tinted landscape, completing the subterfuge. Their thick fur, unlike other mammals, grows from belly to back, ending in a big fluffy cowlick on their lower back. This allows the rain to flow off of the sloth while it is hanging upside down by all four limbs.

A surprising discovery to many who have the opportunity to see the two-fingered sloths in action is how fast they can move. Visitors to the Toucan Rescue Ranch are quite taken aback as our orphaned youngsters rapidly move upside down, claw over claw across their climbing structures to grab a newly hung branch of fresh almond leaves, a two-fingered sloth’s favorite. While they are nocturnal, sloths have occasional periods of activity during the day, and the babies are no exception — especially when waking up for some food.

Their nocturnal lifestyle and their lack of a permanent smile may be some of the reasons why the two-fingered sloths have been virtually ignored in favor of their more smiley-faced sloth relatives, but they are equally fascinating if given the chance. Here’s hoping that someday there will be brownish, round-eyed, pig-nosed sloth appearing on T-shirts in your local stores. They deserve some love, too.