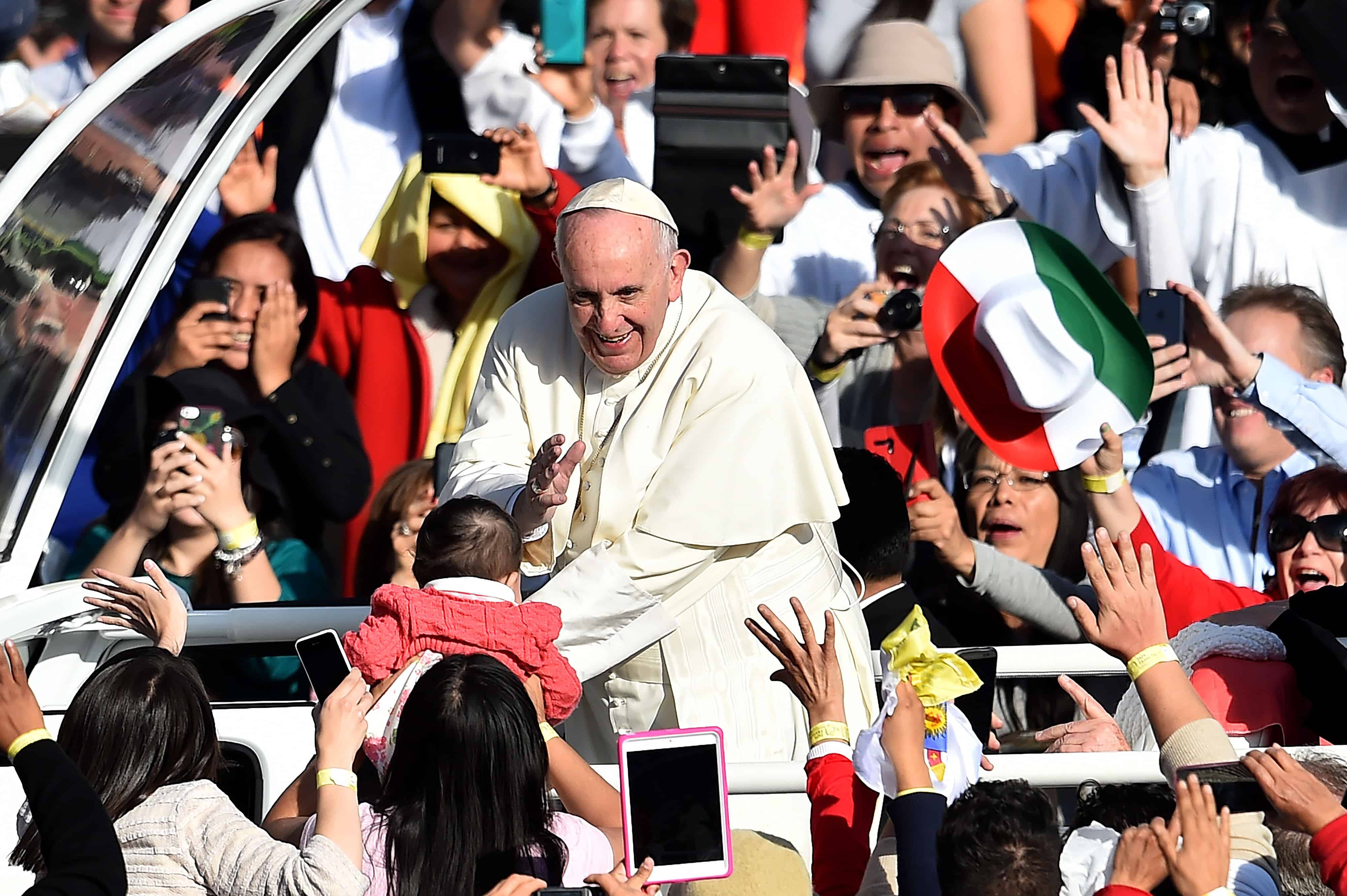 Pope Francis arrives to celebrate an open-air Holy Mass in the Basilica of Our Lady of Guadalupe in Mexico City, on Feb. 13, 2016. Pope Francis is in Mexico for a trip encompassing two of the defining themes of his papacy: bridge-building diplomacy and his concern for migrants seeking a better life. (Gabriel Bouys/AFP)

MEXICO CITY – Pope Francis threw himself into the most contentious of issues roiling Mexico during his first full day here, calling on President Enrique Peña Nieto and his government to protect citizens and bring justice to a country wracked with violence and corruption.

Kicking off the first leg of his six-day tour of the Spanish-speaking world’s largest Catholic country, the pontiff offered an unvarnished assessment of Mexico’s troubles and the need for honesty and faith to overcome them. His first speech, addressing Peña Nieto and other top Mexican officials, took place inside the National Palace, as tens of thousands of people filled the Zócalo plaza outside and listened to remarks on jumbo-screens.

“Each time we seek the path of privileges or benefits for a few, to the detriment of the good of all, the life of society becomes a fertile soil for corruption,” the Pope said, “drug trade, exclusion of different cultures, violence and also human trafficking, kidnapping and death.”

The Pope said Mexico’s political class had the duty to give its people access to “an adequate home, dignified work, food, real justice, effective security, and a peaceful and sane environment.”

One of the world’s mega-cities ground to a halt to greet Francis, with roads barricaded miles from his events, and police and soldiers out in force to maintain security amid the hundreds of thousands who came to get a glimpse of the popular pontiff. Students were off from classes on Friday and many businesses closed as residents lined the streets waiting for a glimpse of the Pope-mobile as it wended through the streets.

Over the next week, Francis plans to visit the extremes of Mexico, from the poor, heavily indigenous southern border state of Chiapas, which has become a way-station for thousands of Central American migrants, to the northern border town of Ciudad Juárez, which is recovering from its dark drug war years. A man passes a banner welcoming Pope Francis near where he will officiate an open-air mass in San Cristobal de las Casas, Chiapas State, Mexico, on Feb. 13, 2016. Johan Ordóñez/AFP

Those backdrops, plus a planned stop in the volatile western state of Michoacán, gives Francis plenty of opportunity, if he chooses, to highlight Mexico’s recurrent failings with violence, immigration, poverty and government corruption. Plus, with anti-immigrant sentiment surging in the U.S. presidential race, the pope could enter that fray by his example of showing compassion for the downtrodden. With all the problems in Mexico, “we need the pope to show us the light,” said Leticia Gutiérrez Valderrama, a nun who directs an organization that works with migrants.

After Pope Francis’ spoke in the National Palace, he moved across the plaza to the city’s Metropolitan Cathedral, which was built beginning in the 16th century on top of an Aztec temple. He addressed Mexican bishops, speaking in his hypnotic near-whisper, in his Argentine-accented Spanish.

“I beg you please don’t underestimate the ethical and civic challenge drug trafficking poses to youth and the entire Mexican society, including the church,” Francis said.

The crowd in the Zócalo that had been sitting quietly in the bleachers listening to his words erupted in cheers when the Pope condemned drug-trafficking. Mexicans seemed to be yearning for the Pope to strike a serious tone, to recognize the gravity of their problems and to call their government to account.

“There is so much injustice in Mexico,” Rubén Sandoval said as he motioned to the National Palace. The 44-year-old accountant had come to the Zócalo to hear the Pope’s speech, and to welcome “the representative of God on this earth” to Mexico. “There’s a lack of work, a lack of education, a lack of opportunity. And I hope the government bears that in mind.” Pope Francis arrives to celebrate a Holy Mass in the Basilica of Our Lady of Guadalupe in Mexico City on Feb. 13, 2016. Gabriel Bouys/AFP

On Friday evening, Francis stepped down from his Alitalia airliner and was greeted by a field of waving lights, as cheering crowds roared their approval from bleachers erected on the flight apron of the Mexico City airport.

Francis was met by a beaming Peña Nieto, and his wife, Angelica Rivera, who walked the pope down a red carpet and introduced him to a range of Mexican officials. The scene was jubilant, with mariachis wearing sombreros and dancers performing lasso rope tricks in front of the smiling pope. At one point Francis tried on a sombrero from one of the musicians.

“Francis, friend, you are welcome here,” the crowd chanted.

The first visit by the Spanish-speaking pope, who hails from Argentina, has generated great enthusiasm among Mexicans. And Mexico City, the capital of a country still more than 80 percent Catholic, has transformed into a city of deference for the religious leader. Residents were lining up for blocks for the chance to pass through metal detectors to get into the Zócalo to see the pope, and giant television screens in the city were broadcasting his every move for those who couldn’t make it as close. Festive music mixed with the bray of organ-grinders as vendors sold pins, flags, “Mexico always faithful” posters, and Catholics posed for selfie-stick pics while holding cardboard-cutouts of the Pope.

Many expect the pontiff’s trip will be used to address the social upheaval here and in Central America, as thousands flee gang violence in search of safety and jobs in the United States. Francis was expected to meet, or have in attendance, relatives of the 43 teachers’ college students who disappeared in 2014, a scandal that has highlighted the links between government and drug traffickers and the inability of Mexican investigators to arrive at the truth.

“Those who thought the Pope was going to be sweet and diplomatic, that it was going to be a rose-colored visit, were wrong,” said Bernardo Barranco, a sociologist who studies religion. “That Pope has come in strong. Very strong.” His visit to Juárez, across from El Paso, Texas, is likely to offer a more pointedly empathetic approach toward the poor migrants seeking refuge in the United States, a message that would clash with the anti-immigrant policies on display so far in the Republican race, particularly candidate Donald Trump’s vows to build a giant wall to keep Mexicans out.

“Our brothers live very difficult situations because of a lack of work, of opportunity, of safety,” said Javier Cortes, a priest in Michoacán. “The pope, surely, is going to ask us to have more consciousness of the situation of our human migrants.”

The wave of migrants “are an expression that something is failing in the system,” Gutiérrez Valderrama said. “They are making that complaint by their walking, by their prophetic presence, and despite all these crimes they keep walking, they keep hoping that things will get better.” Masses gather to welcome Pope Francis as he arrives at the Basilica of Our Lady of Guadalupe in Mexico City, on Feb. 13, 2016. Gabriel Bouys/AFP