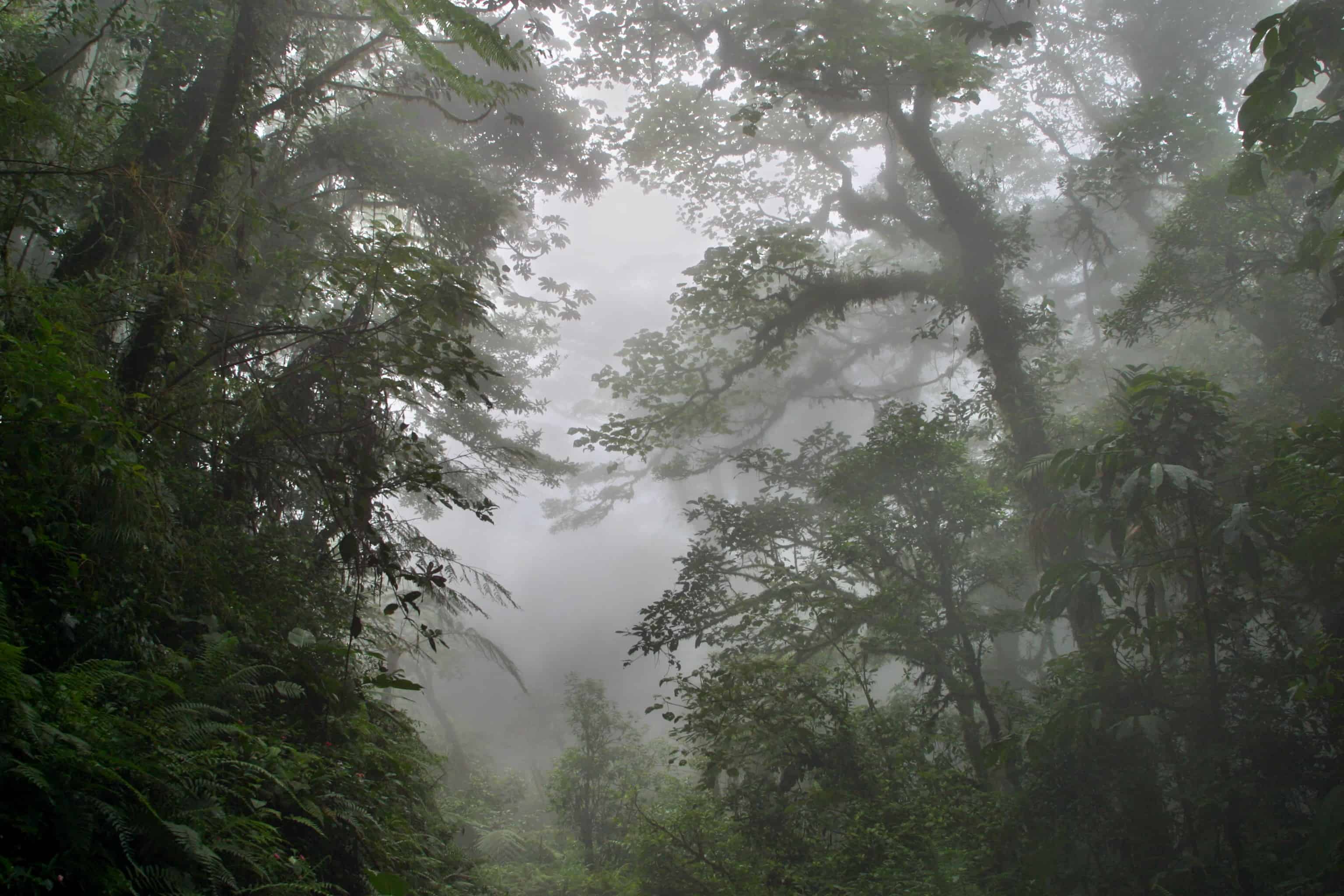 This is how the cloud forest in Monteverde looked in 2005. ((Courtesy of Centro Cientifico Tropical))

MONTEVERDE, Puntarenas – Climate change is one of the most troubling problems of the decade. It already has caused significant consequences across the globe, and Costa Rica is no exception.

The cloud forest of Monteverde, in north-central Costa Rica, is one of the greenest tourist destinations in the country, and it has witnessed the consequences of climate change. Since the 1970s, the Tropical Scientific Center, or TSC, has been tasked with recording these consequences in different areas of the country, especially in Monteverde.

At its highest elevation, the Monteverde Cloud Forest Biological Reserve is classified as a cloud forest, and at its lower elevation, it is a tropical rain forest. In the ’80s, its variety of birds attracted the attention of many scientists who settled in the area to study birdlife, particularly the resplendent quetzal (Pharomachrus mocinno) and three-wattled bellbird (Procnias tricarunculatus), which arrive in Monteverde to breed. In addition to birds, the golden toad (Incilius periglenes), a species endemic to this area, drew many wildlife explorers. In fact, the reserve was created to protect species like this toad, which was seen for the last time in 1989, although in 1988 approximately 1,000 of them were spotted. Monteverde Cloud Forest Biological Reserve co-founder George Powell and his wife started a global campaign with the TSC and the local Quaker community to collect funds in order to buy land and turn it into a reserve. It now spans approximately 4,025 hectares. Two other private reserves, the Children’s Eternal Rainforest, and Santa Elena Cloud Forest Reserve, bring the total area of protected land in Monteverde to 26,000 hectares.

The Monteverde reserves are an important location not only for Costa Rica and Central America, but also for the entire world. It is one of the most biodiverse areas in the country. According to Mercedes Díaz, manager of the Monteverde Cloud Forest Biological Reserve’s Environmental Education Program, “In Costa Rica, of 852 bird species, [Monteverde] has 468, which is more than 50 percent. The same is true with orchids: In Costa Rica, 1,500 species are found, and according to orchids specialist Gabriel Barboza, 503 species are in this small area, which is approximately 34 percent.”

“Some years ago, when I first came, we had to wear gloves, boots and hoods because the temperature was approximately 14 degrees [Celsius],” Díaz told The Tico Times. “It rained a lot, and there were strong winds, too. Visibility was approximately 5 percent. But the climate has changed significantly. Now, people don’t even wear sweaters. To us, one degree higher or lower isn’t much, but to the species that are already adapted, one degree can mean death.”

One of the scientists who has studied these major changes in Monteverde is Dr. Alan Pounds, a U.S.-born, naturalized Costa Rican who has lived and worked in the country for over 30 years.

According to Pounds, “There have been changes in the temperature and rainfall. There has been a decrease in the amount of drizzle and fog that comes with the trade winds of the Caribbean, which are really important, especially during the dry season. We have perceived a change in the variability of rainfall; it’s not that it rains less, but rather it is more variable, causing longer dry periods that didn’t exist before. In the long term, there are more days without rainfall.”

The mountains are home to several endemic species, meaning they are unique to the area. For some, climate change is disrupting the ability to thrive and survive. In Monteverde, amphibians have been the most affected, according to Díaz. “Almost 50 percent of amphibians have disappeared in Monteverde [since the Monteverde Cloud Forest Biological Reserve was created], because of the decrease in the rainfall,” Díaz said.

“In addition to the decrease in amphibian population, such as the golden toad and the harlequin frog, we have witnessed a decrease of lizards, and the distribution and abundance of birds,” she added.

Pounds said quetzal populations are declining, too. “The main effect on birds is that low-zone species are extending their range upward in elevation to the cloud forest,” he said. Bats are doing the same, which means “there are species that shouldn’t be here. This affects resident species because of competition and predation, in some cases. There’s danger of losing endemic species.”

The effects of climate change on species vary from one group to another. In the case of amphibians, climate change directly influences disease, particularly Chytridiomycosis, which is caused by a zoosporic fungus.

For orchids, Pounds said, “We are doing experiments by changing the quantity of water for some individual plants to compare their performance with other individuals. … We have found that orchids exposed to dry conditions produced fewer leaves, flowers and fruits, and they are more likely to die.”

He said the rate of change in temperature is approximately half a degree every 25 years, or roughly 2 C per century. Temperature records began shortly after the Monteverde Cloud Forest Biological Reserve was created, so exact temperature data are still being compiled to conduct useful studies there.

In order to increase awareness about the problem and combat the effects of climate change, the reserve has developed three projects:

1. Inform the public. “We publish many articles about the changes we are experiencing and try to disseminate them so that people will know what is happening, and so that they can become more conscientious,” Pounds said. “There also must be more attempts to reduce greenhouse gases on a large scale, because we must act not only here, but everywhere.”

2. Protect the forest. “It’s pretty important to protect a forest affected by other forms of environmental degradation, [because those] are the most vulnerable to climate change,” Pounds said. “So, it’s important to maintain the integrity of those ecosystems so that they can be more resistant to change. But even so, there will be many changes in the future, and a lot of loss of biodiversity.”

That includes identifying future environmental leaders in different age groups and inviting them to a special environmental training camp. “We try to let children know that they can make a change,” she said. “Sometimes they think that because they are young, they can’t do anything to help. But their decisions will have long-term effects.” In the 1980s, when the Monteverde Cloud Forest Biological Reserve began the work of preserving biodiversity on the mountain, an abrupt changed was witnessed, particularly after El Niño in 1982-1983. A group of scientists from across the world proved that there was a significant change, a climate transition that affected all oceans and continents, Pounds said.

“It’s important to be aware that climate change is not only a gradual process, it presents seasons with huge changes,” he added. “We have to be aware, because we could, right now, be in one of those transitions. Conditions have been extreme in recent years, and they could get worse.”

Pounds acknowledged that life will become more challenging in coming decades, especially due to the fact that we will lose some species that are important to us. International agreements and commitments, such as those outlined in the recent Climate Change Conference in Paris, are important, he added. “But I think that change is in every one of us. Sometimes, we just wait for governments to resolve everything. It’s important to have these processes and encourage the government and the people to look for more ecological energy sources. But, we have to think about our lifestyle – each of us has a great impact, and by our consumption patterns we have a great power to enact changes.”