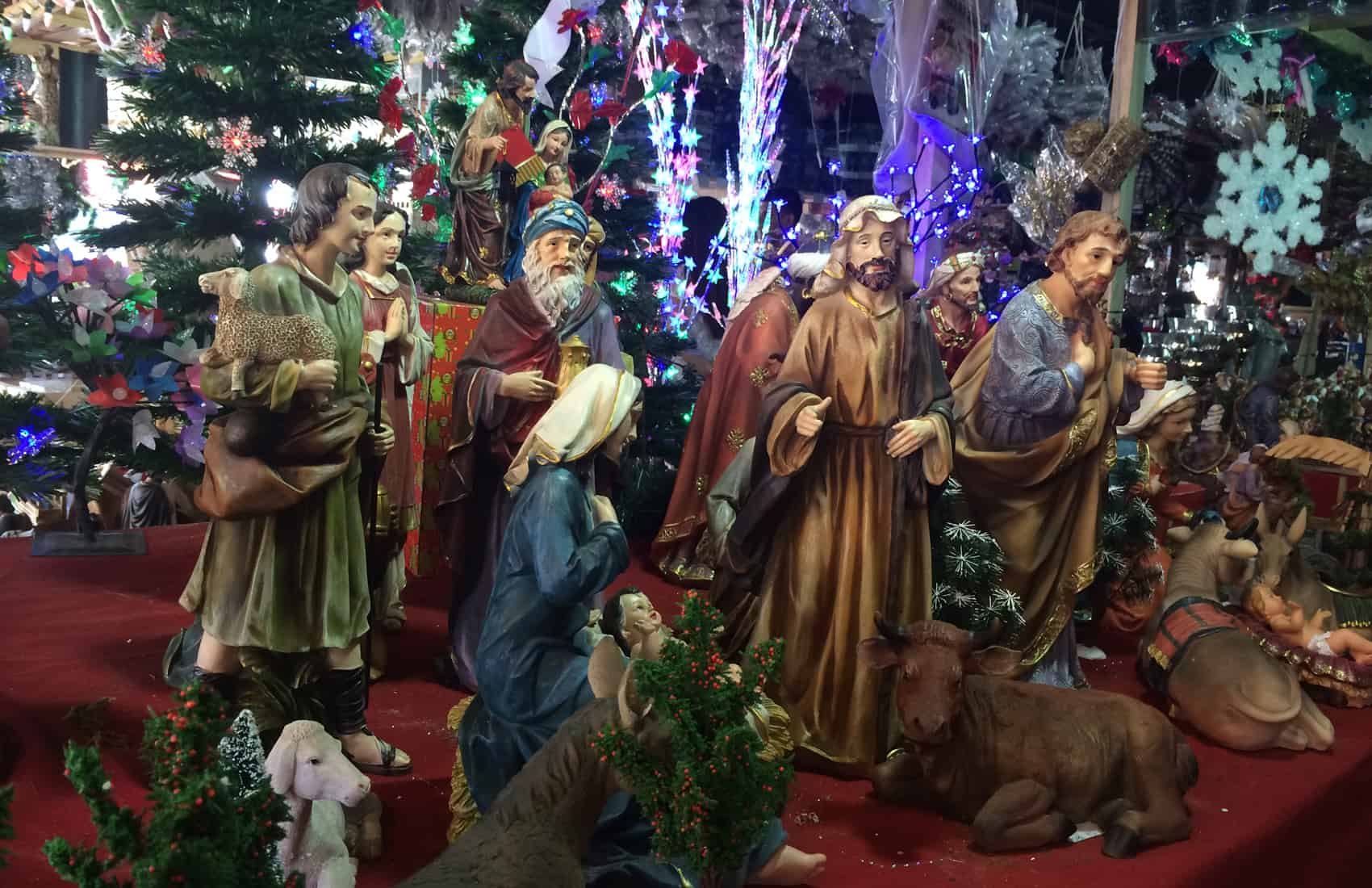 Baby Jesus comes in three different sizes but there are no color choices for his loin cloth. They’re right underneath the giant snowflake, can’t miss ’em.

Along with the December winds, tamales boiling in the pot, halls decked with fake snow and holly, Nativity scenes are a tradition of the season here. They’re splashed across the National Insurance Institute tower in San José in bright lights, in front of the National Theater, on tables near the Christmas tree all across Costa Rica, and the Gran Feria Navideña in Guadalupe, northeast of the capital, has everything someone would need to recreate the birth of the King of Kings in their home. Walking 200 meters west from the northwest corner of the Guadalupe Central Park, Christmas trees are the first hint of the tropical winter wonderland ahead. Push past the evergreens to find perhaps the most complete collection of Christmas kitsch in the country. The Feria Navideña might overlook the sin of pride when it declared itself the “best chinamo [shop stall] in the world,” but it’s still got a lot going for it. Giant light-up sparkling snowflakes hang from the zinc roof, bales of ribbon and boxes of colorful Christmas tree ornaments line the floor.

But the real standout is the shop’s collection of Nativity figures. In case you didn’t know, Nativity scenes represent the Bible story of the birth of Jesus Christ in Bethlehem. Mary, pregnant from the immaculate conception, rides into Bethlehem on a donkey with Joseph. But on their arrival there was “no room at the inn” and the first family of Christianity had to spend the night in the stable with the animals. The newborn Christ is greeted in the manger by the three Magi who followed the Star of Bethlehem to the “king of the Jews” bearing gifts of gold, frankincense and myrrh. A "crowd" of Bethlehem villagers nativity figurines for sale at the Gran Feria Navideña in Guadalupe. Zach Dyer/The Tico Times

The Feria’s stables range from simple slabs of wood (arguably more in tune with the humble setting of the story) to elaborate Middle Eastern settings with stuccoed walls and domed roofs several levels high. Oh, and don’t forget the moss.

Identical donkeys, sheep, geese, cows and other livestock figurines of various sizes are lined up in neat rows. A large table has what appears to be a mob scene of ceramic Bethlehem villagers, milling about with baskets of fish and grapes or carrying lambs as others play cornets to entertain the crowd until the Noche Buena comes. Ceramic sheep for nativity scenes lined up at the Gran Feria Navideña in Guadalupe on Dec. 12, 2015. Zach Dyer/The Tico Times