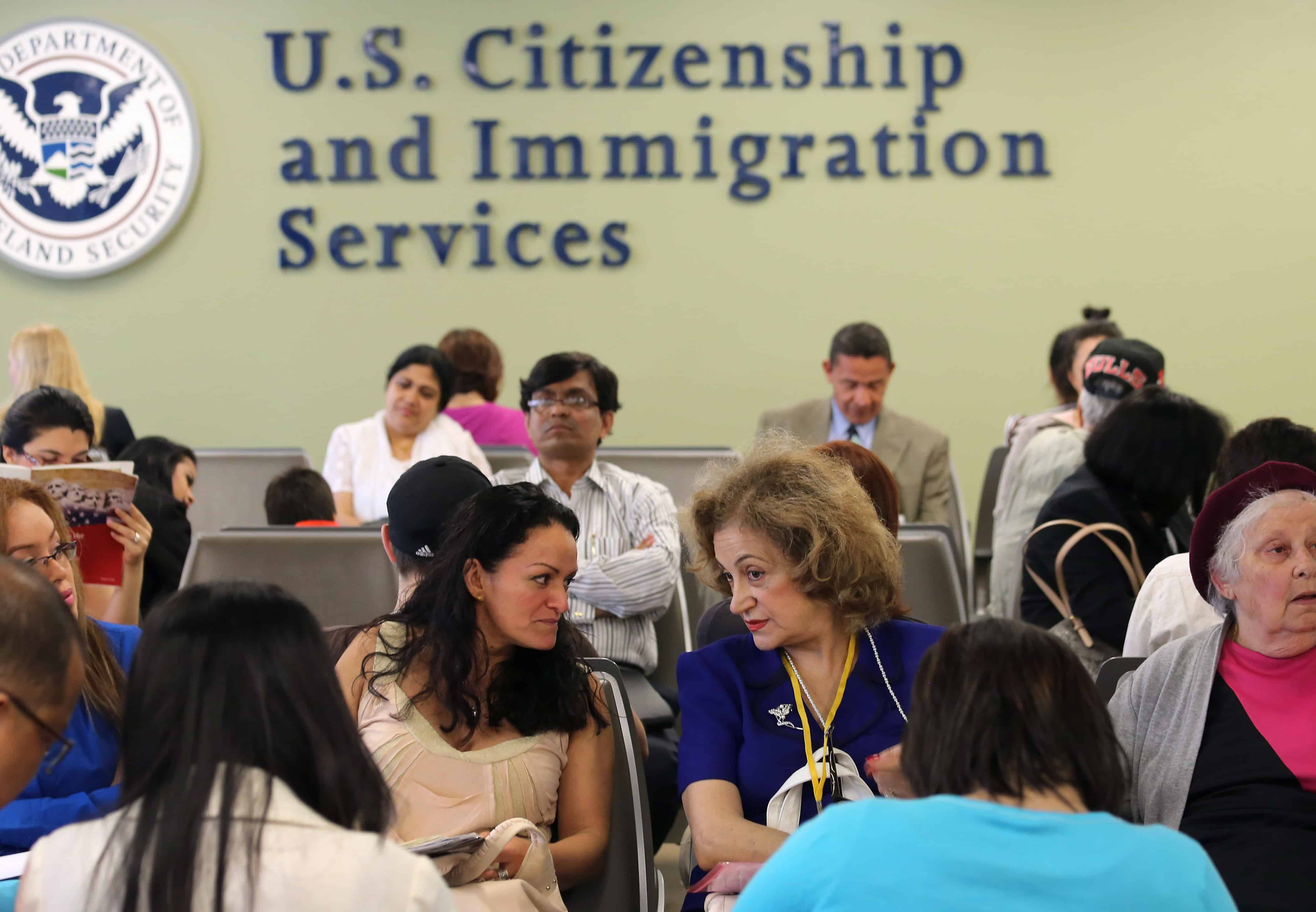 Immigrants await their turn for Green Card and citizenship interviews at the U.S. Citizenship and Immigration Services office in Queens, New York, on May 30, 2013. (John Moore/Getty Images/AFP)

With immigration a hot topic on the U.S. presidential campaign trail, unions and immigrant advocates are focusing attention this week on a federal visa program that they deride as “immigration reform for the 1 percent.”

The target of a series of news conferences in a half-dozen cities is the EB-5 immigrant investor program, which allows foreigners to get green cards by investing at least $500,000 in U.S. businesses, as long as the money creates at least 10 jobs.

Created by Congress in 1990 as a way to stimulate the U.S. economy, the program is supported by business groups and has increasingly been used in recent years by real estate developers and other firms seeking foreign investors. In the District of Columbia, for example, investors have put up more than $110 million and created more than 1,500 jobs through projects such as the Marriott Marquis convention center hotel, according to a trade group that backs the program.

But with legislation authorizing EB-5 set to expire next month, immigrant advocates are highlighting what they say are unpublicized problems. They say that the program doesn’t create as many jobs as advertised and that those jobs it does create don’t benefit the nation’s estimated 11.3 million illegal immigrants, some of whom work on the projects.

“We have this program that gives a pretty fast track to immigrants from the 1 percent and gives incredible advantages to developers,” said Isaac Ontiveros, a research analyst for Unite Here, a union that represents nearly 300,000 hotel, casino and food service workers. He estimated that one-third of businesses funded by EB-5 are hotels or casinos.

With efforts to overhaul the nation’s immigration system dead for now in Congress, Ontiveros added: “How does this help the 11 million people in this country who are stuck in immigration reform limbo?”

The union and at least 15 immigrant advocacy groups are planning news conferences criticizing the program this week in cities including Seattle, Los Angeles and San Diego. Organizers say they will name what they describe as specific hotel projects that exemplify the problems.

Shin Inouye, a spokesman for U.S. Citizenship and Immigration Services, which administers the EB-5 program, said it is intended “to help strengthen our economy and create American jobs, including in rural areas and urban areas experiencing high unemployment.”

He added that Citizenship and Immigration Services, which is part of the Department of Homeland Security, has taken steps to improve EB-5, including better fraud detection and national security-related measures. “We continue to work with the Congress on further improvements to strengthen the integrity of the program as Congress considers its reauthorization,” Inouye said.

Under the program, foreign entrepreneurs and some of their family members can obtain legal permanent-resident status by investing a minimum of $500,000 in U.S. commercial enterprises. The program was barely used as recently as 2005, but it became a popular source of capital after the financial crisis. Last year, a record 10,692 EB-5 visas were issued, according to the real estate services firm Savills.

But the upsurge has brought new scrutiny, with some critics saying the program doesn’t do enough to benefit targeted poor areas, especially rural ones, and that its screening process may not meet national security guidelines. About 85 percent of the EB-5 visas issued in 2013 went to China, with others going to South Korea, Japan, Great Britain, Russia and other countries, according to Invest in the USA, an EB-5 trade group.

Members of both parties have recently proposed a series of revisions. In June, Sens. Charles Grassley, R-Iowa and Patrick Leahy, D-Vt., the chairman and ranking Democrat of the Judiciary Committee, respectively, introduced legislation that would reauthorize the program but make changes. Among those are tightened oversight of companies that arrange the investments from foreigners.

But Ontiveros said the changes don’t go far enough and called for tougher oversight, along with more information about the jobs created by the program and whether they benefit poor areas. “We want those in Congress and at the local level to be aware of the inequities of this program,” he said. “If it is reauthorized, we want it to benefit working people as much as possible.”