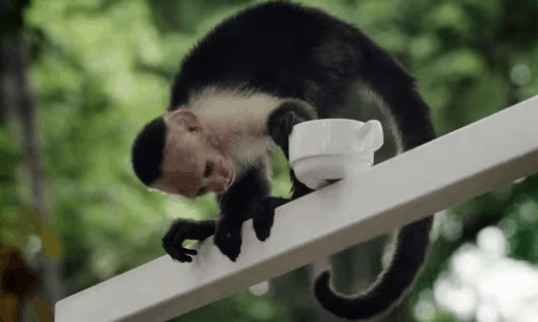 Costa Rican howler, capuchin and spider monkeys are making an international media splash as the stars of a new IKEA commercial filmed at the Jaguar Rescue Center in Puerto Viejo.

In the ad, the majestic, quiet jungle gives way to mayhem when the primates come across a perfectly stocked IKEA kitchen in the middle of a clearing. An upbeat song keys up as the monkeys pull open drawers, test out the coffee machine and discover a cupboard chock full of bananas.

The ad, which is part of IKEA’s “The Wonderful Everyday” campaign, debuts on British and Irish television on Saturday. But it’s already getting attention online from the likes of FastCompany and Adweek. The latter named it the “ad of the day” on Friday.

Encar García, biologist and founder of the rescue center, said the agency that produced the spot, Mother, contacted her about the idea of setting up a kitchen in the jungle and filming the monkeys’ reaction to it. She said she agreed after assuring that the animals would be safe.

García didn’t anticipate the huge production crew that showed up to film in Puerto Viejo. But she said the experience was a positive one for everyone — including, she thinks, the monkeys.

“It was like an enrichment activity for them to suddenly find a kitchen where they went every day,” García said.

The rescue center got a donation out of the deal and IKEA struck gold in its attempt to show that kitchens can be fun.

“They were great actors,” García said of the monkeys.

The commercial’s producers didn’t quite get everything they wanted, though. García said they originally asked her for a hippopotamus to film along with the monkeys. After she explained that hippopotamuses don’t live in Costa Rican jungles, Mother had to settle for digitally splicing in an elephant at the end of the ad. Check it out:

Mother also produced these behind the scenes videos. In the first, the rescue center kitchen gets a makeover. In the second, the creative directors talk about the process while trying not to look distracted by the monkeys crawling all over them.