In El Salvador, Nicaragua, abortion can mean death or jail 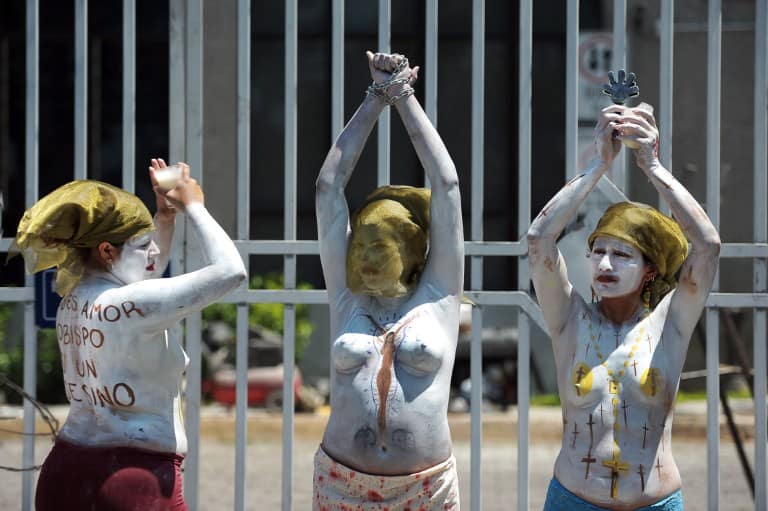 Members of feminist organizations demonstrate in favor of abortion outside the courthouse of San Salvador on May 15, 2013. (Jose Cabezas/AFP)

SAN SALVADOR, El Salvador — María was in her second year of university. She had a boyfriend and used the pill. Nevertheless, she missed her period for a month so she bought a test, which confirmed her pregnancy.

Her relationship wasn’t a serious one, and her studies were very expensive. She wasn’t sure she wanted a child so, ashamed, she told her parents what happened.

Her father had a clear opinion about it: she had to get rid of the child, no matter what. But as María lives in El Salvador, this meant going to a clandestine clinic and risking up to 40 years in prison for murder — of a 6-week-old fetus.

El Salvador is one of the few countries worldwide where abortion is forbidden in every possible case — even when the pregnancy is the result of a rape or when the mother’s life is in danger. The country’s anti-abortion law dates back to 1997.

According to the Salvadoran group Citizens’ Coalition for the Decriminalization of Abortion, 129 women were put on trial for abortion in El Salvador between 2000 and 2011. Most of them had their charges upped to murder, according to the group, and many were convicted.

Because of the serious penalties against abortion, María didn’t dare talk about it with anyone beyond her family. The more people knew about her pregnancy, the greater risk she ran that authorities would find out and she’d be prosecuted.

In the end María went to a clandestine clinic in a residential house. She was given Cytotec pills, which stimulate contractions of the uterus that can cause a woman to abort. In María’s case, the pills also gave her chronic pain in her digestive system.

According to the World Health Organization‘s most recent report on the issue, 21.6 million women had unsafe abortions in 2008. Of them, 47,000 women died as a result of the abortion, and 5 million were left disabled.

Nine years after her abortion, María still suffers the physical and psychological effects of the ordeal. She’s afraid to tell her story using her real name. In a country where women can wake up chained to their hospital bed after a miscarriage, you don’t talk about the illegal abortion you’ve had.

Which is not to say that it doesn’t happen frequently.

Pro abortion rights groups and Amnesty International have teamed up to campaign for the freedom of 17 women, known as “Las 17,” who have been imprisoned in El Salvador for ‘murdering’ their fetuses. And they’ve had one big success.

In January, one of the 17, Carmen Guadalupe Vásquez Aldana, was granted clemency after seven years in prison. Vásquez had been raped by her employer when she was 18. She had a miscarriage that resulted in heavy bleeding, which sent her to a hospital — against her employer’s will.

There, the doctors suspected an abortion. After an operation, Vásquez woke up handcuffed.

Vásquez was a domestic servant, living with the family she worked for and the man who raped her. With an average salary of $250 a month, domestic servants are unlikely to have the means to fund a safe abortion.

In Nicaragua, where, like in El Salvador, politics are strongly influenced by the Catholic Church, abortion has been officially outlawed since 2006, even if the pregnant woman’s life is in danger.

Ruth María Matamoros, a psychologist who works with the Nicaraguan women’s organization Grupo Venancia, said that the abortion ban creates a divide between rich and poor.

“In our eyes the abortion law mainly creates discrimination against the poor,” she said. “Those who have the money just fly to Miami to go to a private clinic. The poor will always look for clandestine clinics, where (practitioners) don’t always know what they are doing.”

Women in Nicaragua don’t get jailed for clandestine abortions as they do in El Salvador. But women’s organizations fear this could be the next step. And the abortion ban does put women’s lives in danger.

Grupo Venancia’s staff regularly hears stories from women who sought abortions and were treated with bent clothes hangers, which can perforate and infect the uterus. Following such abortions, women often wait to see a doctor until the infection is life threatening.

“We see this as a human rights violation,” said Matamoros. “Being pregnant after a rape is a form of torture. Plus, you don’t change anything about the amount of abortions (that take place) when you prohibit them. You only move the abortions to obscure places.”

The 2013 case of another woman, who goes by the pseudonym Beatriz, brought international attention to El Salvador’s anti-abortion laws. Doctors determined that Beatriz’s fetus was not viable. Beatriz also suffered from the autoimmune disease lupus, which made every day of pregnancy a serious and painful danger to her health. So Beatriz sought legal permission to abort.

She was initially denied permission to have an abortion, but the Inter-American Court of Human Rights intervened and ordered El Salvador’s high court to reverse its decision.

Human rights lawyer and judge Florentín Meléndez, was the only one of five judges on the initial Salvadoran Supreme Court panel to vote in favor of granting Beatriz an abortion. He remains staunch in his position.

“We are not only a tribunal for justice,” he told the Tico Times. “We deal with human lives, so it is important to be reasonable when we look at a case like Beatriz’s, and establish firm legal grounds for the future.”

Following El Salvador’s decision to pardon Guadalupe Vásquez in January, a special U.N. panel applauded the decision but urged El Salvador to pardon the other women jailed under similar circumstances and to repeal its anti-abortion legislation.

Abortion rights activists hope that El Salvador’s newly-won seat on the U.N. Human Rights Council could pressure the country to change the law. In its petition for a seat on the council, the country stressed the strides it has made in making amends for human rights abuses committed during the country’s civil war, which ended in 1992.

The country promised to “continue to promote legislation and administrative and other measures in order to advance the goal of ensuring that public policy guarantees the full exercise of human rights” on the domestic front.

But apart from Vásquez, El Salvador’s Supreme Court has not conceded pardon for any of the other 16 women for whom requests for clemency have been submitted.