For some Colombian kids, classroom is jungle and family is FARC 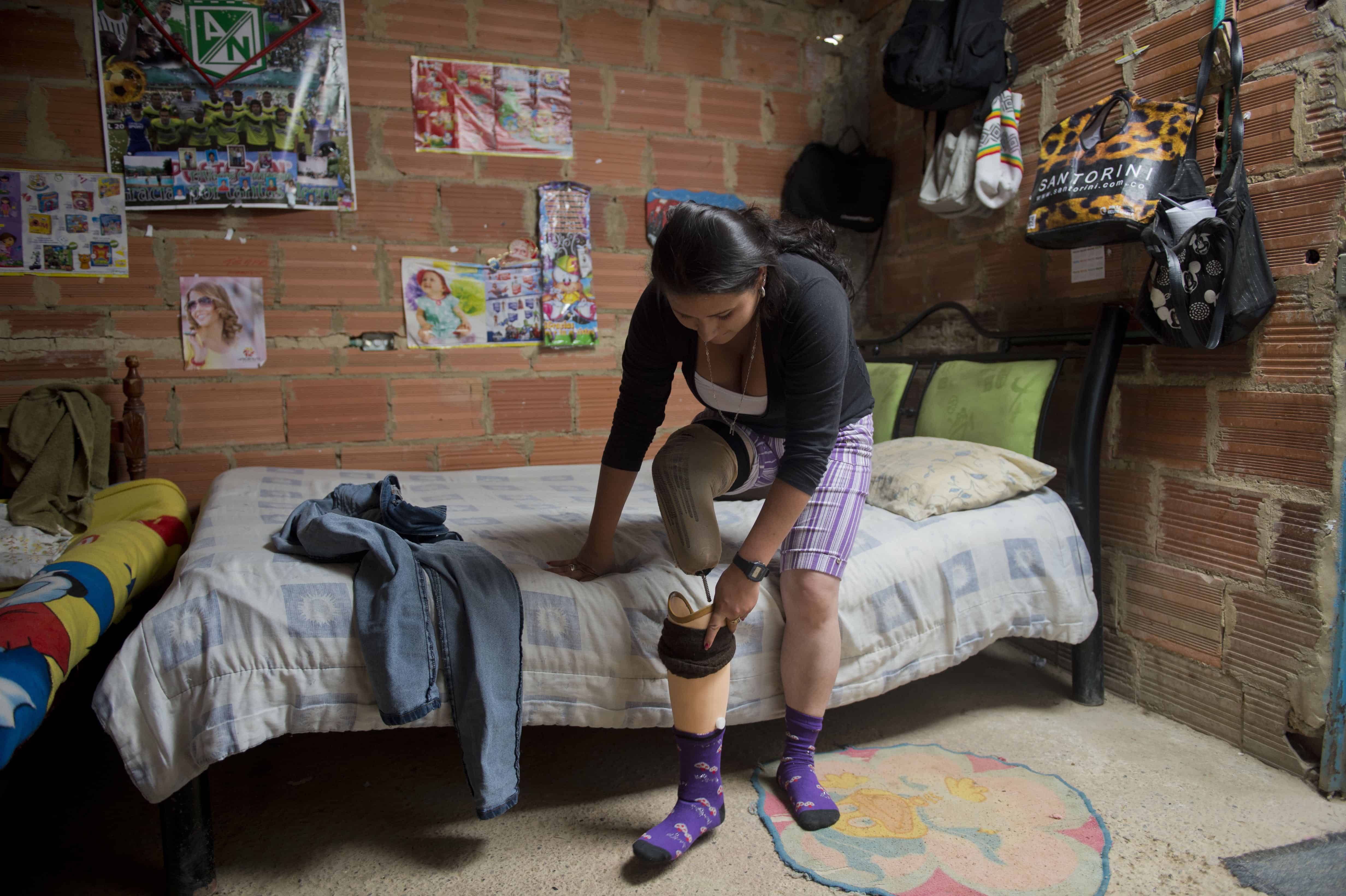 Aurora, a former Revolutionary Armed Forces of Colombia (FARC) member, who had been recruited when she was 12 years old and was injured in an attack, puts on her prosthesis at her house in Bogota on April 24, 2015. (Eitan Abramovich/AFP)

BOGOTÁ, Colombia — Aurora, who grew up doing back-breaking work on a farm in central Colombia, was 12 years old when she first set foot in a classroom, and the lesson was self-defense against “enemy combatants.”

Her hometown was in a stronghold of the Revolutionary Armed Forces of Colombia, the Marxist guerrilla group that has been at war with the Colombian government for half a century.

When the rebels recruited her as a pre-teen, she ran away from home, where she had family problems, and was sent to the jungle for training. She studied military tactics and learned to use AK-47 and R-15 rifles.

“I was just about 13 when I used a gun for the first time,” she told AFP. “They taught us lessons in a classroom. We learned a lot of stuff, like how to defend ourselves from the enemy.”

She spent more than four years in the FARC, until her left leg was blown off in combat when she was 16.

Today, Aurora, whose name has been changed to protect her, is a petite, smiling 24-year-old who is studying to finish her high school degree.

There are no precise figures on how many minors have been recruited in Colombia, whose tangled conflict has drawn in multiple leftist guerrilla groups, right-wing paramilitaries and drug gangs since it erupted in the 1960s.

The state-run Family Wellbeing Institute says it has helped more than 5,000 child recruits since 1999.

Of these, 60 percent belonged to the FARC; 20 percent to the United Self-Defense Forces of Colombia (AUC), a right-wing paramilitary group; 15 percent to the National Liberation Army (ELN), another leftist guerrilla army; and the remainder to other armed groups.

Ending the recruitment of minors has been one of the issues on the table at peace talks between the FARC and the government, which began in 2012, seeking to end a conflict that has claimed 220,000 lives.

In February, the FARC pledged to stop recruiting minors under 17 years old.

But outraged Colombians called on the group to go further and release all minors currently in its ranks.

Growing up in combat

As a girl enlisted in the FARC, Aurora did not understand exactly what she was fighting for, she said.

“You join up and…they tell you you’re fighting for a cause, but I had no idea what it was all about. They told me, ‘You have to go to such and such a place,’ and I followed orders,” she said.

She was firing mortar rounds on government forces during a skirmish when the army detected her position and bombed it, sending her flying through the air.

Unconscious, she was operated on by FARC medics, who amputated her mangled leg.

Her company left its wounded with families in the area and retreated as the army moved in.

Aurora was placed in the same house as another comrade, who convinced her they should flee.

She enrolled in a government program for child soldiers, which provided psychological counseling and is helping her build a small house in Bogotá, the capital.

She is married now, and wants to study cosmetics after getting her diploma.

But moving on after life as a guerrilla has been difficult, she said.

“I spent almost five years with them. I grew up in the group, and it was very hard when I left, because I was used to living under their rules,” she said.

One of the toughest moments was reuniting with her mother, she said.

“She cried a lot. She said, ‘What happened to you? You were healthy, and now you’re mutilated.'”

Aurora goes to rehabilitation sessions with army soldiers who were also wounded in combat.

She said she is not bitter about what happened to her.

“Little by little, I realized the army was doing what it had to. They had to fight to keep from getting blown up too,” she said.

Costa Rica announced 21 new coronavirus-related deaths over the last day for a total of 781, according to official data…

Save The Waves Coalition has named Playa Hermosa in Garabito, Puntarenas as a World Surfing Reserve (WSR), the non-profit announced…