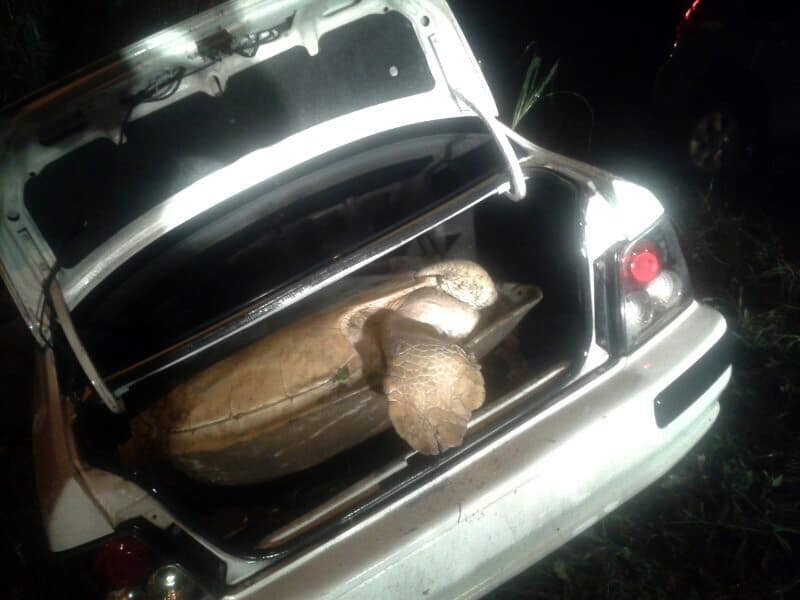 Limón police found a live sea turtle in the trunk of a car after a shootout and high-speed chase. ((Courtesy of Public Security Ministry))

Correction: Police initially reported that the turtle was a leatherback sea turtle. After several readers pointed out that it wasn’t a leatherback in the photo, The Tico Times called for clarification and a local biologist confirmed it was actually a green sea turtle.

Costa Rican police officer Raúl Rivera was helping at a routine police checkpoint late Wednesday night in the Caribbean port city of Limón when his unit was suddenly fired upon by occupants of an approaching vehicle.

“We saw the car approaching and were about to stop it for an inspection when suddenly they [the occupants] began shooting at us,” Rivera said.

Police pursued the vehicle, and after several kilometers, managed to pull it over to the side of the road. One suspect fled the scene. Another man with the last name Dower was taken into custody. When Rivera searched the car, he was shocked at what he found in the trunk.

“[Police] found an enormous [green] sea turtle in the trunk,” a press release from the Public Security Ministry stated. “It was alive and flapping its fins as if asking for help.”

Police believe the men planned to sell the kidnapped endangered turtle for meat. Green sea turtles can weigh up to 700 pounds. The creatures nest on Costa Rica’s Caribbean beaches from July to October and are often poached for their meat and eggs.

Happily, the Costa Rican Coast Guard released the turtle back into the ocean following the incident, and Rivera ended his shift early in the morning, a job well-done.