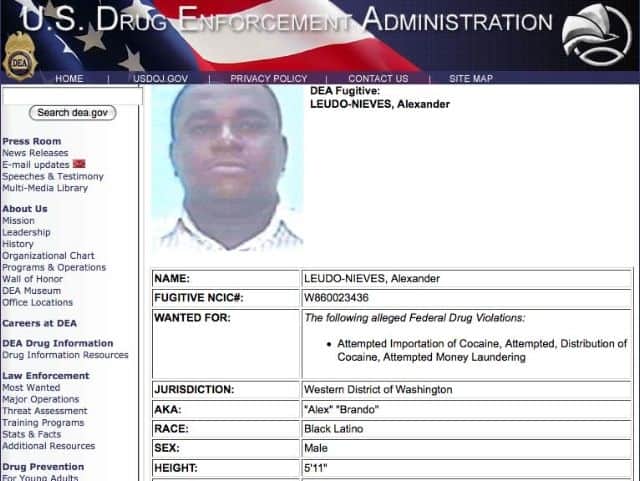 In June 2011, Costa Rica’s public security minister, Mario Zamora, announced with fanfare the arrest of Alexander Leudo Nieves, a Colombian man naturalized as a Costa Rican who Zamora said was a key player in a drug trafficking cartel responsible for “a significant part” of the estimated 900 tons of cocaine that passes through Costa Rica each year.

Leudo, from the Colombian port city of Buenaventura – a key launch point for much of the cocaine trafficked from South America to the United States – was arrested on June 9, 2011, along with two other Colombians and seven Costa Ricans in 15 raids across the country. Police seized $286,000 from Leudo during the raid.

The bust was preceded by two earlier police seizures of 85 kilograms of cocaine linked to the group in San José, Costa Rica’s capital.

Later that year, a member of Costa Rica’s Drug Control Police was awarded “officer of the year” by the International Association of Chiefs of Police for his role in bringing down Leudo and his alleged trafficking network.

Costa Rican and Colombian media describe Leudo, 37, as a “capo” wanted by the U.S. Drug Enforcement Administration. Costa Rica’s National Commission for Improving the Administration of Justice said Leudo was a “big fish” in the international drug trafficking world, and noted that he had used fake ambulances, known in the drug-world vernacular as “narcoambulancias,” to transport cocaine inside Costa Rica.

The network allegedly moved cocaine from Buenaventura, Colombia, through Panama, into Costa Rica, and then on to Honduras or Mexico, authorities said at the time of Leudo’s arrest.

A Colombian Supreme Court ruling from May 2010, of which The Tico Times has a copy, describes a U.S. extradition request for Colombian cartel leader Silvio Montaño Vergara. In the court document, the U.S. District Court for the Western District of Washington alleges:

Silvio Montaño Vergara, David Orlando Andrade Ramírez, Raúl Arturo Fernández, Alexander Leudo Nieves and René Machorro conspired to transport 2,700 kilograms of cocaine from Colombia to Honduras, from where it was to be transported as contraband first through Mexico and finally to the United States. Montaño Vergara, Andrade Ramírez, Fernández, Luedo Nieves and Machorro met on many occasions with a witness who is cooperating with the DEA in an investigation to discuss the numerous specific details regarding this shipment of cocaine.

Yet this alleged “big fish” of the drug trafficking world is currently serving out a sentence on drug-related charges in a minimum-security prison in Heredia, north of Costa Rica’s capital, where he is given home leave on weekends.

Reynaldo Villalobos, assistant director of Costa Rica’s prison system, told The Tico Times that every weekend Leudo leaves the San Luis de Santo Domingo, Heredia prison on Fridays and returns on Sundays at 6 p.m. And as part of a plea deal, Leudo could be granted early release from prison on May 27, after serving less than half his sentence of seven years and nine months on charges of possession of illicit drugs with the intent to traffic, and aggravated organized crime on the level of international drug trafficking, a spokeswoman for the court system told The Tico Times.

According to a penal expert consulted by The Tico Times, most convicted criminals in Costa Rica have the opportunity to seek early release after serving only a third of their prison sentences. The Justice Ministry evaluates each case and requires that inmates have a job offer after being released, have demonstrated good behavior and have studied. It’s a legal option known here as “el tercio,” and according to legal experts, it happens up to 10 times a month. (El tercio requirements for prisoners convicted of sexual crimes are more stringent.)

Leudo’s former attorney, José Miguel Villalobos, denied that Leudo had been convicted of trafficking charges, in a phone conversation this week.

“This case is simply because he loaned a vehicle. They didn’t find drugs on him,” Villalobos said. “Alexander Leudo Nieves was never convicted of drug trafficking in Costa Rica, nor has he ever been charged with drug trafficking in Costa Rica. … He was convicted because he loaned a pickup truck to someone and drugs were later found in that vehicle.”

As to the allegations that Leudo is wanted by the DEA, it is true that Leudo’s photo and personal information appeared at least two years ago on the DEA’s website of wanted suspects. That photo has since been removed, but that doesn’t necessarily mean he’s no longer wanted, a DEA spokeswoman told The Tico Times.

“The investigation that you are inquiring about is under seal by the court which prohibits any comments. DEA fugitives are updated on a periodic basis and not all DEA fugitives are listed on the website. I am not able to provide any additional information,” DEA Special Agent Jodie Underwood said in an email.

Although he said he no longer represents Leudo, Villalobos said there is no love lost between him and the U.S. anti-drug agency.

“I don’t know if he’s wanted by the U.S. or not, and I don’t care,” Villalobos said. “On a national level, this is a low-profile case. For the gringuitos, maybe it’s an interesting case. But when they negotiate with Mexican drug traffickers, that’s not high profile, right? For me, they [the DEA] have no moral authority.”

And in case it didn’t sink in that Villalobos really doesn’t like the DEA, he offered this: “The United States is so responsible, and I put that word in quotes, ‘responsible,’ because they never were responsible, that they never solicited [Leudo’s] extradition; they never initiated a process to cancel his [Costa Rican] naturalization. The Gringos do and say whatever they want, as if they are owners of the world, which they believe they are.”

Scolding aside, Leudo’s case raises some interesting questions about Costa Rica’s role in the U.S.-led war on drugs. Among them, why spend an exorbitant amount of time and resources on arresting and dismantling drug trafficking networks if the Costa Rican justice system has a considerably more lax approach? And why politically advertise to such a great extent these types of arrests, as Zamora (rightfully) did back in June 2011?

In the past two years, at least two high-profile alleged drug traffickers were released on bond by Costa Rican judges. One of them fled and now is a fugitive from justice. And just last week, a judge threw out charges against Colombian and Costa Rican suspects arrested last November at a clandestine helicopter landing site in the Caribbean slope town of Guapiles. At the site, police found five AK-47s, $50,000 in cash and six cellphones with important evidence on them.

The Justice Ministry is expected to evaluate Luedo’s release in coming weeks.