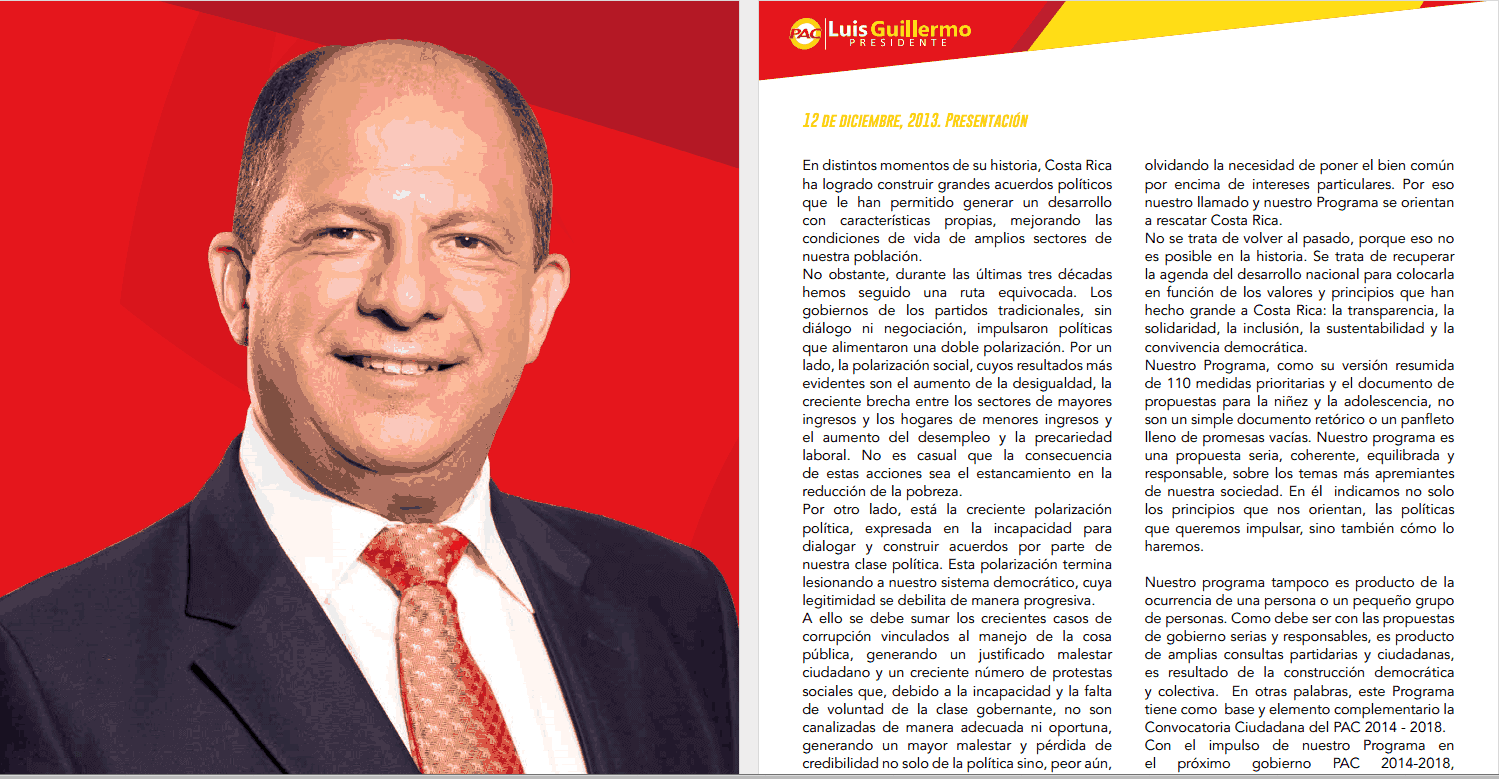 Originally released in December, the Citizen Action Party president-elect’s plan for governing contains a mix of centrist and progressive policy proposals. Forming the foundation of his specific proposals are what he called three pillars: fighting corruption, growing the economy and reducing inequality and poverty. Solís’ plan attacks previous administrations, whose economic liberalization of Costa Rica failed to deliver an equitable economy, according to PAC.

“The past generated two types of economy: one very dynamic, modern and generally oriented toward external markets, with limited possibilities to create new sources of employment, and the other, traditional, which created many jobs with low pay and where small and medium-sized businesses concentrated,” Solis’ plan said.

Solís promised to deliver a responsive government that distributed income more equally, while upholding Costa Rica’s commitment to human rights and ecological protections. However, Solís’ plan stopped short of calling for the rollback of some economic liberalization, such as free trade agreements, which he has criticized in the past.

The environmental plank of Solis’ plan was heavy on platitudes with specific proposals on water rights, involving local communities and reorganizing the Environment Ministry (MINAE).

His proposals focus heavily on management of aquifers and reservoirs, supporting the recently passed Water Resources Management Bill, which considers access a fundamental right, meaning private use of water would have to go through government concessions. His plan called for sanctioning those who violate sustainable water resource management.

For reorganizing MINAE, Solís proposed simplifying regulations while not diminishing them as his priority. He proposed a System of Application and Compliance with Environmental Laws to seek out critical areas. He asked that all government ministries make public information on their own environmental impact. In dealing with climate change, he proposed using the National Emergency Commission to evaluate risks and adaptation measures.

The reorganization proposed to focus on more local involvement and an ostensible increase in the power of local governments. Alongside this, Solís advocated for involving indigenous communities and residents who live near protected areas or national parks. His government plan calls for “adequate funding” for protected areas as well as improving the livelihood of employees such as park rangers. He also called for giving priority to artisanal fishermen in Costa Rica.

Public transportation gets a mention in his environment section and a more detailed layout in his infrastructure plan. Solís called for an electric train in San José’s metropolitan area, investment in alternative fuels and an electronic payment system such as a transit card to make public transportation easier.

Public deficits and debts have plagued Costa Rica for years, and Solís has promised to resolve this issue without increasing overall tax rates. His government plan laid out a combination of increased tax enforcement, some tweaks in sales taxes and controlling government spending.

Solís’ plan said his administration would target Anonymous Societies (the most common type of corporation in Costa Rica, known as S.A.s), the self-employed and high-income individuals for tax evasion. He would also increase collection measures on permits and concessions such as liquor licenses. Social welfare agencies such as the retirement system, the Caja and the Social Development and Family Allowance Fund would see an increase in their collection ability, according to Solís’ plan. He also called for a revision on taxing foreign companies.

The president-elect has called for changing the country’s sales tax to a more progressive value-added tax. Arguing it would protect the lower classes, Solis suggested a tax on luxury goods, capital gains and polluters. He further called for a modified tax on luxury homes and a new law to punish tax evaders.

His plan becomes slightly less concrete when talking about government spending, saying he would eliminate redundant and superfluous parts of the government. He called for prioritizing all government spending based on whether it creates a positive social, economic or environmental impact. His progressive philosophy remained as he called for government spending to be directed at the poorest sectors of the country. Solís said he would provide a stricter standard on increases in government salaries, which currently automatically increase.

Coming under special scrutiny was the health care and social security system of Costa Rica, which suffers under enormous deficits.

“[The health care system] has become a fragmented and segmented health system, with long waiting lines, conflicts of interest, corruption, a difficult financial situation, especially the CCSS [the Caja], among other things that have weakened,” Solís’ plan said.

In the section on the Caja, Solís strongly pushes for reform, saying the board of directors needs to be reorganized as well as the payment system.

Solís castigated free trade and market liberalization policies that have been the norm in Costa Rica for the past decades.

“Implemented neoliberal politics have led to the destruction of the supportive state and rights, with its negative effects in all aspects, and principally, for women,” Solís’ plan said. “The globalized world continues to exercise mechanisms of oppression on all women, and, in Costa Rica, it has continued to produce these patterns of oppression against women, which touch all aspects of daily life.”

In order to combat this regime, which he said has disproportionately affected women, he promised to improve health coverage, lower the income gap with men and reduce violence against women. Solis’ plan said he aims to lower the number of women without medical coverage by 15 percent. For income inequality his government will provide 1,250 loans per year to women entrepreneurs. His government also will fund 5,000 projects over four years through the small and medium-sized business branch of the Economy, Industry and Commerce Ministry.

For other groups, ethnic minorities and the disabled, Solís’ plan has called for providing loans or credits, though not with the specific numbers he has with women. He has promised to provide 5 percent of public employee positions to the disabled, and to provide college grants to indigenous youth.

With LGBT individuals, Solís has not advocated for marriage or civil unions, but his plan did extend the promise of property rights between same-sex partners, medical visitation rights and having sexuality as a status protected from discrimination.

As said above, Solís promised a commitment to expanding public transportation, not only for environmental reasons, but to alleviate traffic congestion. He further said he would tackle a number of road projects in the National Transportation Plan of 2011-2031, which have stalled or lagged under President Laura Chinchilla.

Solís’ plan said he would eliminate excessive road tolls and promised to devote 40 percent of road resources to municipalities with agricultural zones.

On the issue of public security, Solís’ promised to increase police resources and salaries. He also proposed a parole option for offenders who did not commit violent or property-related crimes, in order to alleviate prison overcrowding.