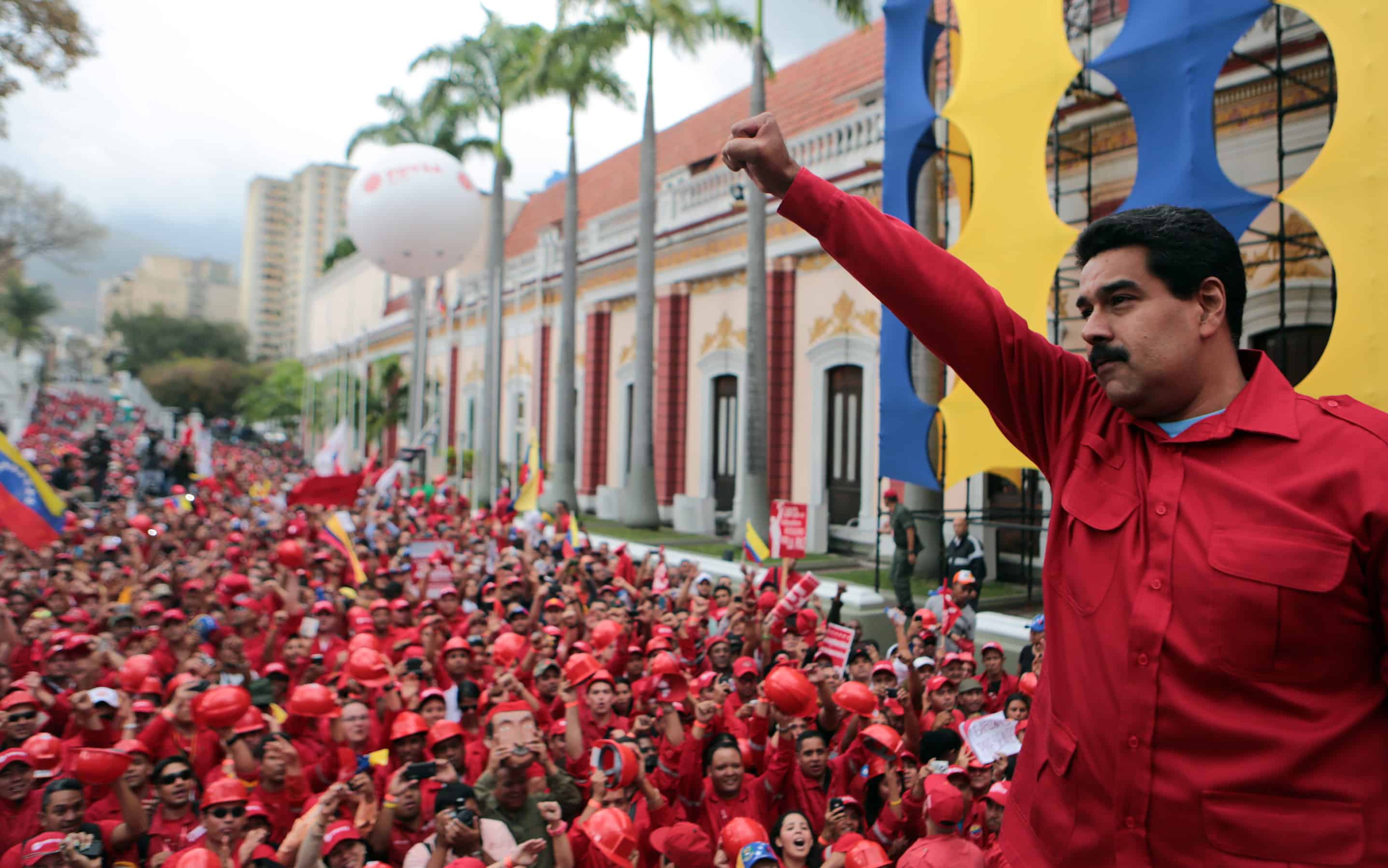 A handout photo released by the Venezuelan Presidency of Nicolás Maduro as he raises his fist during a rally in Caracas, on Feb. 18, 2014. (AFP/Presidencia)

WASHINGTON, D.C. – As unrest simmers in Caracas, a new crisis has erupted between Venezuela and the United States — yet another show of tension between two countries nevertheless bound by trade interests.

Venezuela announced Sunday it was expelling three U.S. diplomats, accusing them of meeting with students leading two weeks of protests against the government of President Nicolás Maduro, successor of the late Hugo Chávez.

Despite the rhetoric out of Venezuela, experts say economic realities minimize the threat of any serious disruption in ties.

When times get tough, it is convenient for the Caracas government to try to divert people’s attention with some old-fashioned nationalist chest-thumping, said Erick Langer, professor at the Center for Latin American Studies at Georgetown University.

“There are tremendous political troubles in Venezuela and the easiest thing for the Venezuelan government to do is to pull out the anti-imperialist-nationalist card,” he said.

His government accuses the United States of maneuvering to “promote and legitimize efforts to destabilize” Venezuelan democracy — claims Washington has called “baseless and false.”

“They are returning to their central narrative. As the crisis mounts up they have to show that it is not the people rising against their economic incompetence but really a foreign-sponsored plot,” said Ray Walser, executive director at the Americas Forum.

Protesters are angry over rampant street crime, shortages of basic goods, runaway inflation and an otherwise disastrous economy in the country with the world’s biggest proven oil reserves.

So far, four people have died in violence linked to the protests, which are the biggest since Maduro was elected 10 months ago, after the leftist firebrand Chávez died of cancer.

“One way to see how well the Maduro government is doing is to check and see what they say about the U.S.,” said Langer.

U.S. State Department spokeswoman Jen Psaki said Tuesday that Venezuela’s accusations “reflect a lack of seriousness on the part of the Venezuelan government to deal with the grave situation it faces.”

Walser said “the expulsion of more U.S. personnel is only going to deepen the divide between the U.S. and Venezuela.”

The two countries have not traded ambassadors since 2010, and were at opposite ends of the international political spectrum during the Chávez era from 1999 to 2013.

Venezuela is the main obstacle to President Barack Obama’s strategic and diplomatic policy in Latin America. Venezuela accuses the United States of behaving as if it were running an empire.

And while the U.S. aligns itself with like-minded countries such as Colombia or Mexico, Venezuela leads an anti-U.S. regional bloc called ALBA.

Still, political tension is one thing, but money talks. The United States continues to be Venezuela’s top buyer of oil, paying in cold hard cash for 900,000 barrels a day.

State-run oil company PDVSA, through its subsidiary CITGO, has three refineries and more than 6,000 service stations in the United States, which in turn sells thousands of products to Venezuelan companies.

Talk nasty but do business gladly — “it is a huge contradiction” that keeps the threat of severing relations at bay, said Langer.

He added that the disagreements are “symbolic more than anything else” and the political and economic effect of the anti-U.S. bloc led by Venezuela is minimal for Washington.

“The U.S. government has made a calculation that it is in the greater interest of the U.S. and of its consumers that it continue to receive Venezuelan oil than it is to sanction Venezuela. They don’t want to make Venezuela the martyr,” Langer said.

The bad blood goes back to 2002 when a coup, which Caracas says was backed by Washington, briefly deposed Chávez.

In a huge surprise, Chávez and President Barack Obama shook hands at a regional summit in 2009.

But a year later, the designated U.S. ambassador to Venezuela made some comments that irked Chávez, who rejected the nominee before he even set foot in Caracas.

There have been attempts at patching things up. But Caracas gave up in July after the now U.S. ambassador to the U.N., Samantha Power, criticized Venezuela.

In late September, Maduro expelled three other U.S. diplomats, including the charge d’affaires, accusing them of conspiring with the opposition.

In the United States, “there is concern over the stability of a neighbor in our region which impacts important allies, particularly Colombia,” said Walser.

That interest involves issues like security, drug trafficking and Venezuela’s ties with Havana and Tehran.

Still, “the U.S. is not going to actually involve itself in the current crisis, but it has its eyes on what is happening there,” Walser said.