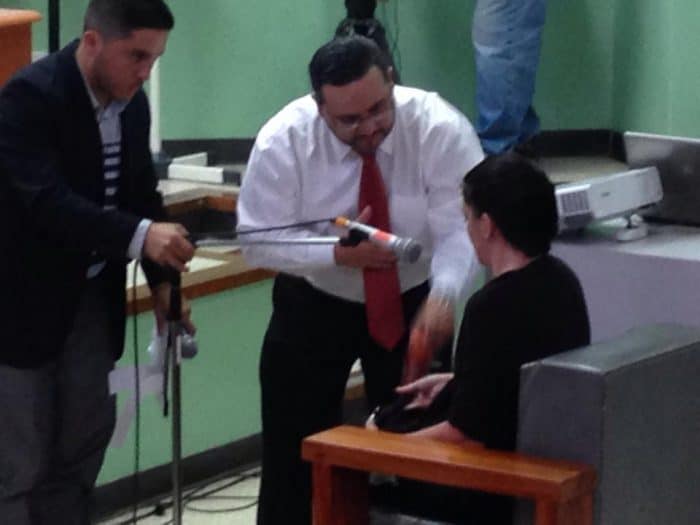 UPDATE: CNN seems to have bumped special on US man’s mysterious death in Costa Rica

This Outside Magazine story’s got everything. A rich but troubled genius from the United States. His crazy, hot wife. Their Costa Rican jungle mansion and its exotic pets, moat, helipad and 550 Tiffany lamps. Diamond smuggling. Murder?

Screenwriter and journalist Ned Zeman spins the tale in true noir fashion, as if already preparing it for the screen. “Rich expats gravitate to a suburban area called Escazú, because that’s where all the embassies are and because misery loves company,” he writes. “It was there, in a high-security apartment complex for short-term diplomats, that I first met Ann Bender, Central America’s most captivating accused murderess.”

The writing in that paragraph and many others is comically over-the-top, and we’re not just saying that because some of us happily live in Escazú. And we’re not sure which embassies he’s referring to (the U.S. Embassy is in San José). Here’s the thing – not many who live in Central America would even recognize the name Ann Bender. And the exaggerations certainly do not end with her cast as “Central America’s most captivating accused murderess,” particularly given the isthmus is the world’s most murderous region outside a war zone.

When Zeman refers to the city of San José as “a sprawling gray mess,” that’s hard to argue. But “doubles as the sex-tourism capital of Latin America?” Whaaaa? San José could never claim the distinction of sex-tourism capital of Latin America. There’s just as much prostitution next door in Panama, and plenty of other countries in Latin America: Dominican Republic, Nicaragua, Cuba, Colombia, Brazil, need I go on? Zeman continues: “Thanks to legalized prostitution, parts of downtown look like Disneyland for horny, middle-aged Australians.” Hmmmm. No. In fact, there are so few Australians who come to Costa Rica that the Costa Rican Tourism Board doesn’t even have statistics on them (as it does for many other countries). The only explanation is that our city grossed Zeman out, and he also happens to hate Australians. So he expected them to be here, too.

A few other choice fact checks: Zeman calls “La Florida de Barú the most underdeveloped region in Costa Rica. Nope. It’s Talamanca. Then he goes on to paint a detailed picture of rough life in the jungle for the wealthy expats, who were apparently surrounded by pit vipers and warring monkey tribes in the highland jungle wilderness. But then he explains that the 5,000 acres the Benders purchased “was composed of separate farms that produced a meager coffee crop and a few grazing areas for cattle.” That means the area wasn’t a jungle. It had been clear-cut.

Later on, Zema refers to Ann’s security chief José Pizarro as a former “chief of Costa Rica’s civilian security force.” That’s odd, because Costa Rica has no “civilian security force.” Perhaps it was a bad translation of National Police director? Either way, the idea that the guy couldn’t drive 10 feet without a cop shouting ‘generale‘ or ‘Don Pizarro‘ is strange. First of all, ‘generale’ is not a word in Spanish. Secondly, Costa Rica has no army. Where did Zeman get this stuff?

There are more exaggerations and slippery facts, but it would get sort of exhausting to list them all. Instead, let’s talk about what Zeman seems to have done right. As it turns out, he can relate in certain ways to his eccentric characters the Benders, and that probably helped him create such intimate portraits of them. The author wrote a memoir in 2011 about his own battle with mental illness, which got so out of control that he underwent electroconvulsive therapy.

His coverage and treatment of the trial is interesting, considering it received little or no coverage in the English-language press (including us). And it is a good read. But given how loose Zeman is with other details, we wonder how accurate it is.

Anyway, when you’ve got 15 minutes to spare, give this bizarre, captivating and questionable story a read. It’ll be good to get that out of the way before it comes to theaters in 2015.