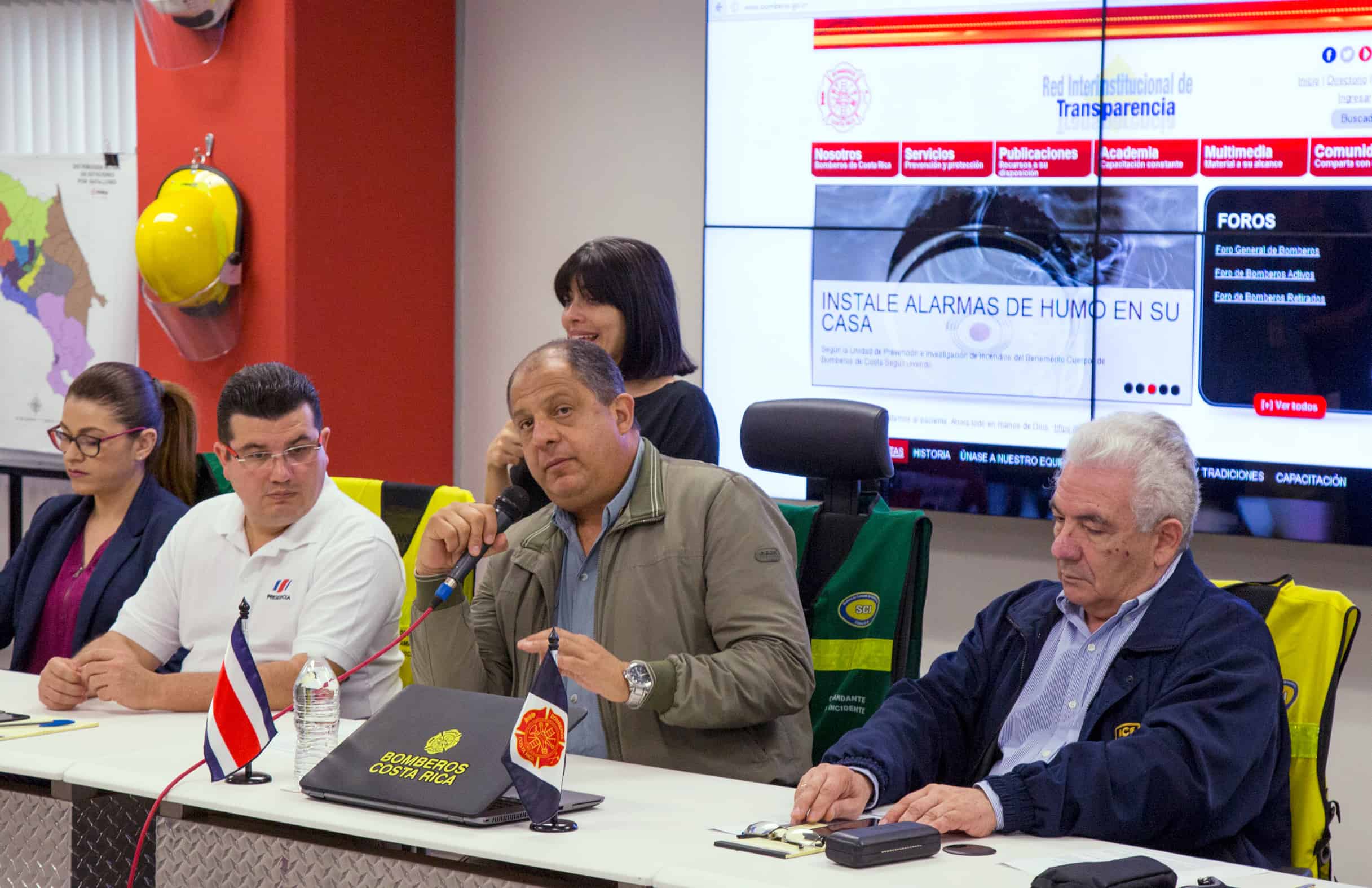 President Luis Guillermo Solís addresses reporters at a press conference where government officials explained that the power outage also affected other Central American countries, and even parts of Mexico. ((Via Casa Presidencial))

The Central American countries are interconnected by an electricity transmission line of 1,820 kilometers, which extends from Panama to Guatemala.

Each country has its own security mechanism that automatically disconnects from the regional system in case of an incident or imbalance at any point on the transmission line.

Costa Rica’s protection system, however, was not able to address the problem, causing some 1.4 million homes and businesses to be left without power for five hours, ICE reported.

President Luis Guillermo Solís and ICE Executive President Carlos Obregón said at a press conference that a power failure in a transmission line in Panama caused a strong imbalance of 500 Megawatts at power plants, which caused a failure in Costa Rica’s surge protection system.

The National Energy Control Center reported that the Reventazón and Arenal hydroelectric plants, the largest in the country, restarted operations at 2 p.m. All other power plants resumed operations gradually, and electricity services were operating as usual across the country at around 6 p.m.

The power outage affected vehicle traffic, as most traffic lights across the country were down. National Police officers joined Traffic Police to regulate traffic in all seven provinces.

Public Works and Transport Minister German Valverde said at the press conference that only 159 traffic lights  in San José operated normally, as they run on solar energy.

Traffic Police Director Mario Calderón reported that there were 71 accidents during the power failure, 36 of them in the Greater Metropolitan Area.

Many businesses were forced to close early and the National Police sent more officers to patrol the streets in all of the country’s cities.

The Water and Sewers Institute reported water shortages in several communities, as many pumping wells failed at their stations.

The Civil Aviation Administration said in a news release that the country’s air terminals had minimal interruptions. Juan Santamaría International Airport did suspend operations for 30 minutes at 3 p.m. in order to run a safety verification protocol of its control tower and communications systems.

Civil Aviation Director Enio Cubillo said that the main problems at airports during the outage were with the Immigration Administration’s information system, and with information screens at the terminals.

Saturday’s power outage was the second this week. On Wednesday, a series of explosions and a fire at an ICE substation in Desamparados, south of the capital, left more than 121,000 of its customers without electricity for almost 24 hours.

The last time Costa Rica experienced a total blackout was on April 19, 2007, when a failure at the Arenal-Cañas transmission line in the province of Guanacaste caused a failure across the country for an hour.

At the time, the outage also affected traffic lights, telephone and internet lines in all provinces, as well as water pumping systems in the higher areas of San José.

Costa Rica closed 2020 with a fiscal deficit of 8.3% of GDP, the highest in recent decades although lower than…

Guatemalan security forces on Monday broke up a caravan of some 4,000 Honduran migrants trying to reach the United States…