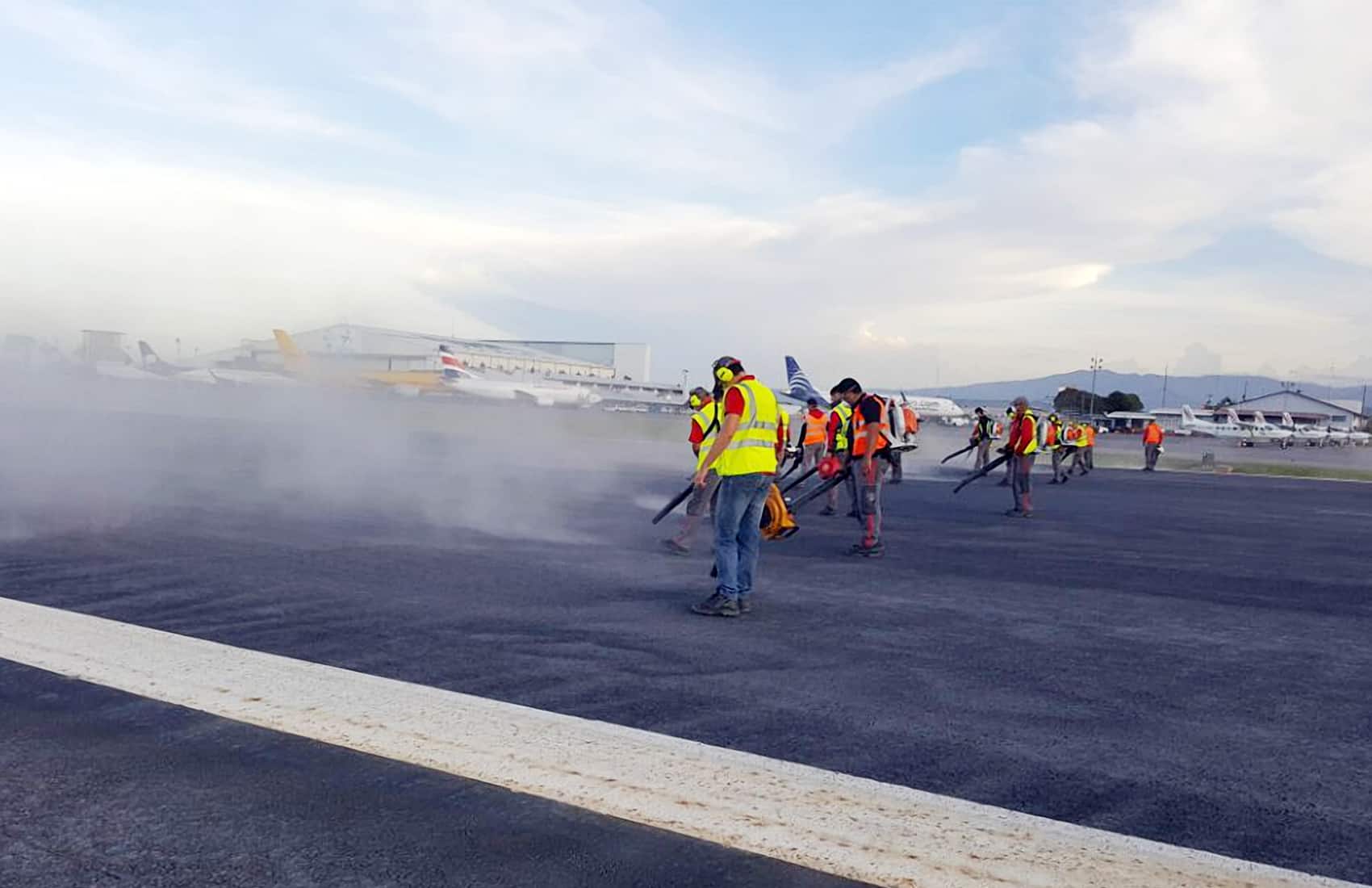 Staff from the Juan Santamaría International Airport on Tuesday, Sept. 20 clean volcanic ash from the runway to allow the reopening of the terminal. The airport closure affected some 3,000 travelers. ((Courtesy of Aeris))

Costa Rica’s Juan Santamaría International Airport (SJO) reopened at noon on Tuesday, nearly a full day after it was closed because of large amounts of volcanic ash in the air and on the runway from explosions at nearby Turrialba Volcano.

The airport is resuming operations progressively, said Juan Belliard, spokesman for Aeris, the company that operates the airport. Belliard asked travelers to check with airlines for the new schedules for their flights.

Belliard said that the temporary closure of the terminal, the largest in Costa Rica, caused the suspension of 68 departures and 52 arrivals on Monday and Tuesday.

Airline reports state that at least 3,000 passengers faced travel problems because of the suspended flights, and that many of them were forced to spend the night at the terminal.

Airport staff began cleaning the runway on Monday evening. However, the large amount of ashfall from at least four major explosions required them to resume cleaning on Tuesday morning.

Aeris closed operations for the first time at 1:15 p.m. on Monday and reopened at 4:30 p.m. However, administrators closed the terminal again just 30 minutes later following reports of new explosions at Turrialba Volcano. Only seven flights were able to use the terminal during the brief time it was open, Aeris reported.

STEP enrollment gives users the latest security updates, and makes it easier for the nearest U.S. Embassy or Consulate to contact people in an emergency.

The press office at the Public Works and Transport Ministry said Tuesday morning that it still does not have an estimated time to reopen the terminal.

Airport staff are cleaning the runway and the restart of operations will depend on assessments of weather conditions during the day, MOPT reported.

Ashfall in the Central Valley

Costa Rica residents since Monday have been posting pictures on social media about the large amount of ashfall covering homes, streets and cars. Ash was especially heavy over the capital San José. Citizens also reported ashfall in communities in Alajuela and Heredia provinces.