Why some Cuban migrants aren’t trying their chances with smugglers 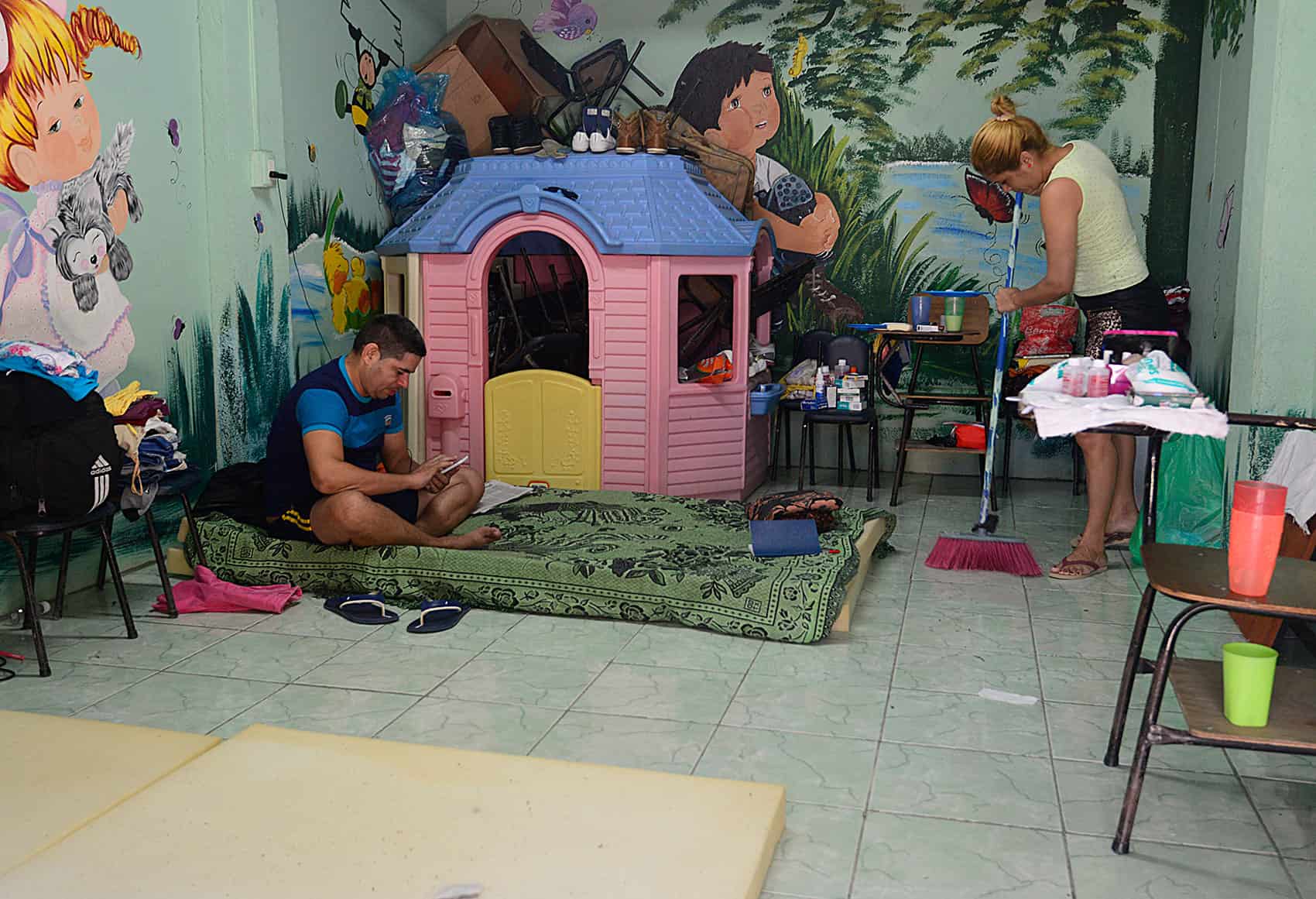 A shelter for Cuban migrants in Costa Rica near the border with Nicaragua. (Lindsay Fendt/The Tico Times)

SAN RAMÓN, Alajuela — After the first successful airlift of Cubans out of Costa Rica on Jan. 12, a path to the U.S. for the stranded migrants has finally materialized. But the wait will be long.

For the 231 Cubans staying at this shelter in a Christian community center 60 kilometers northwest of the capital, the wait has already been two months and could last another five at the proposed rate of future flights. The bottleneck out of Costa Rica is stretching the patience of Cuban migrants and the pocketbook of the Costa Rican government.

More than 7,800 temporary visas were issued to Cubans between Nov. 14 and Dec. 18, 2015, when the government stopped accepting new migrants, according to the Immigration Administration. But only 5,348 are staying in the 35 temporary shelters across the country today. So where are the other 2,400?

Migrants could be staying with relatives, Costa Ricans families or paying for extended stays in hotels, but according to some Cuban migrants here, others, tired of waiting, have tried their chances with smugglers. Anecdotal accounts of Cubans leaving with smugglers abound. But the numbers suggest that while some may have given up on the airlift, others are coming back.

National Emergency Commission President Iván Brenes told The Tico Times that the number of Cubans in the 35 shelters active in Costa Rica increased after the successful Jan. 12 airlift. Since then, another 143 Cubans have arrived at shelters around the country.

Roberto Ramírez, a 31-year-old laborer, was one of the migrants who said he knew several people who had left to try their luck crossing the border into Nicaragua. In November 2015, Nicaraguan military and police turned away a large group of Cubans trying to cross the border at Peñas Blancas with tear gas and truncheons. The border closure there caused the backup of thousands of migrants that lasted until Jan. 12 when the first airlift of Cubans out of Costa Rica took place.

For Óscar González, a 38-year-old migrant from Havana, one run-in with criminals on the way here was enough to convince him not to leave the shelter without safety guarantees. González said that while he and a group were traveling though Colombia they were stopped by a group of seven men and forced off bus they were riding on.

“They took us to this neighborhood,” González said. “They wanted everything, my phone, passport, money, clothes. It was incredible.”

Stories like González’s are cited by government officials as the reason for the search for a multinational agreement for Cubans to pass freely though Central America and Mexico. Last week, Costa Rica President Luis Guillermo Solís met with President Enrique Peña Nieto of Mexico and President Jimmy Morales of Guatemala at the Community of Latin American and Caribbean States summit in Quito, Ecuador, to discuss increasing the number of flights out of Costa Rica. But no firm commitments were announced.

“I’ve received positive support from Guatemala and Mexico to speed up the transit of Cuban migrants to the United States,” President Solís tweeted on Jan. 28.

But news of some Cubans throwing up their hands in frustration with the wait rankled Foreign Minister Manuel González.

“It would be a shame if after all this time and effort we can’t count on the trust of those who would benefit from all this work,” González said in an audio statement released by the Foreign Ministry last Friday, referring to the Cuban migrants.

The Nicaraguan daily La Prensa reported on Jan. 28 that coyotes, or smugglers, were charging Cubans on average $800 to cross Nicaragua illegally and up to $1,500 to reach Mexico. Meanwhile, the cost of an airlift ticket negotiated by the International Organization for Migration costs $555 for the flight, buses and transit visas to the border with Mexico. But migrants have to wait to get the benefits of legal travel.

When asked whether or not the delay was pushing some Cubans to seek out coyotes, Costa Rica’s Immigration Director Kathya Rodríguez said it was too early to tell. In an email to The Tico Times, Rodríguez did not speculate on whether or not Cubans were leaving with smugglers but said that the Immigration Administration was investigating any and all human smuggling cases reported to them.

The Foreign Ministry said that leaving Costa Rica illegally was a one-way decision. Any temporary legal status granted by the government would be forfeited if migrants left the country with smugglers.

“They should think it through first,” González said.

The wait is stressful for Cubans but it’s also becoming an increasingly expensive for the Costa Rica government. Across Costa Rica, there are more than 5,300 Cuban migrants staying in temporary shelters at a cost of more than $640,000 a month to the government. As migrants trickle out of the country, that monthly amount should decrease, but the costs will be in the millions of dollars by the time the last shelter is emptied.

“We’re a small country in a poor part of the world. We don’t have unlimited resources,” said the CNE’s Brenes. Eventually the government will need support from other countries or organizations to maintain sustained operations at the 35 shelters currently open, he said.

The Costa Rican government has been adamant that it will not accept money on behalf of the Cubans but has authorized the Red Cross here to accept donations. Those donations will only support humanitarian efforts for personal hygiene and medical and emergency care of Cubans staying in shelters here and cannot be used to pay for migrants’ flights out.

Anyone interested in donating to the Red Cross humanitarian efforts for the migrants can make deposits at these bank accounts:

Costa Rica’s ambassador to the U.S., Román Macaya, had been meeting with prominent members of the Cuban-American community in Miami to discuss possible mechanisms to support the migrants and any eventual need for those who cannot afford the $555 ticket, but no mechanism to collect those funds has been announced.

The Tico Times asked the U.S. Embassy in San José if the United States has provided any financial or other assistance to the government of Costa Rica or another group here for the care of the migrants. The embassy acknowledged the request but has not yet replied. Any answer will be published here.

As Costa Rican children get ready to go back to school and with municipal elections coming up on Feb. 7, the National Emergency Commission started relocating some migrants whose shelters needed to return to use as schools or municipal buildings.

“We understand the uncertainty, the anxiety, the desire to leave as soon as possible, but we have a mechanism that guarantees safety,” Minister González said. “Coyotes don’t guarantee anything.”

“The coyotes take you through the jungle, places where there’s no security,” Álvarez said. “Why risk being left out there, your money, to lose your life?”