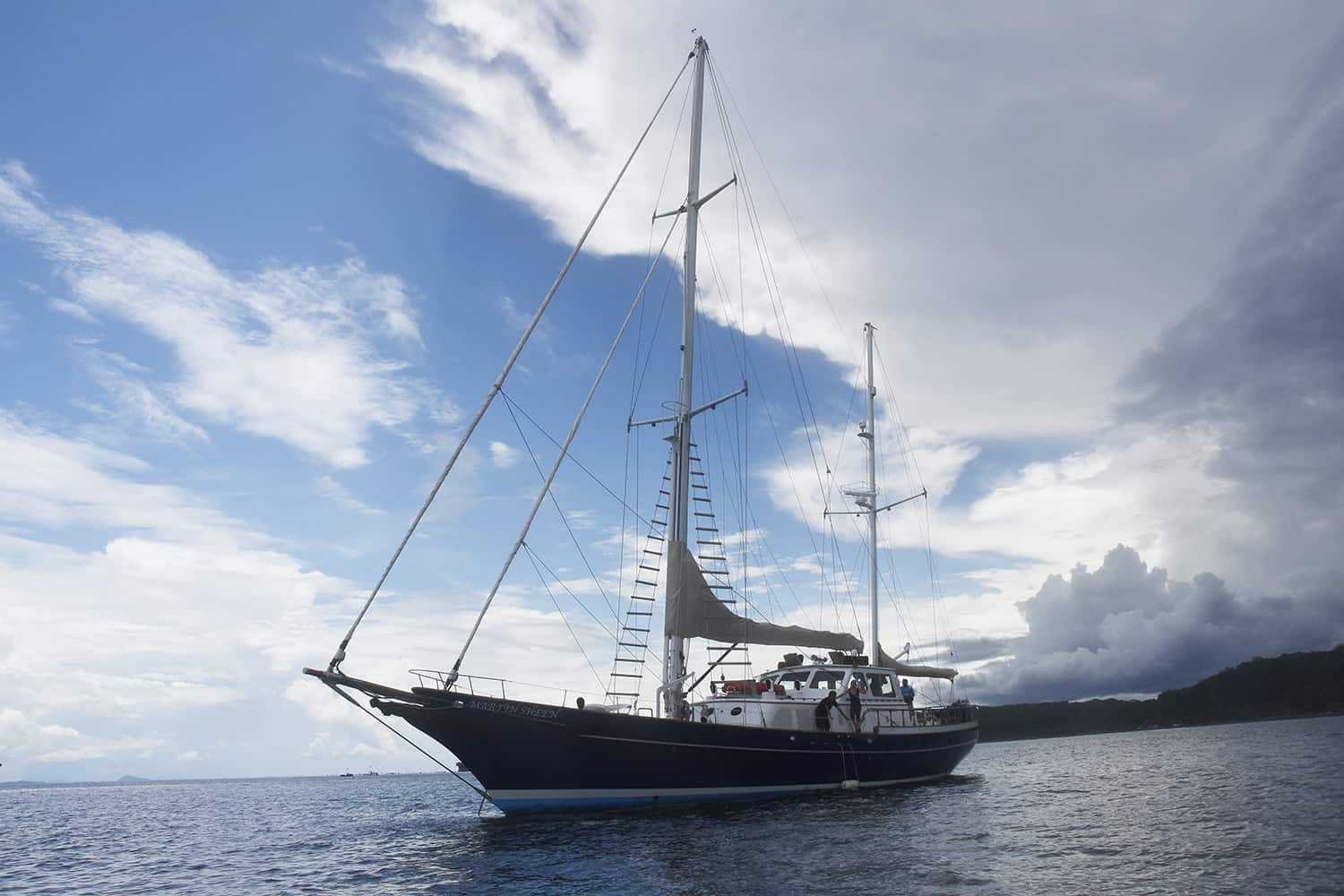 Named after the Hollywood celebrity who has supported the marine conservation group for two decades, the R/V Martin Sheen is one of the latest additions to Sea Shepherd‘s global fleet, and it’s now in Costa Rica.

The 80-foot ketch arrived at the central Pacific port of Caldera on Monday and will be based out of Los Sueños Bay through October, according to Sea Shepherd Central America spokesman Jorge Serendero.

The Martin Sheen, named after the celebrity supporter who sits on Sea Shepherd USA’s Media and Arts Advisory Board and is a close friend of Sea Shepherd captain Paul Watson, was unveiled last October in Marina del Rey, California. Since then, it has embarked on what Sea Shepherd calls “Operation Milagro,” an effort based out of Baja California, Mexico, to save the vaquita porpoise (Phocoena sinus), the world’s smallest cetacean and the most endangered marine mammal in the world, found only in the Gulf of California. The vaquitas’ biggest threat are gill nests set by fishermen. (The National Geographic reported on the fascinating story of the hard-to-spot vaquitas and the effort to save them here.)

In Operation Milagro, which lasted through May 25, Sea Shepherd managed to forge an alliance with the Mexican government and local biologists to protect the vaquita porpoise from illegal fishing operations.

“Sea Shepherd’s Operation Milagro (Operation Miracle) has been highly successful,” the group’s website states. “Our goals for the first leg of the campaign have all been reached. Sea Shepherd has investigated the situation facing the endangered vaquita porpoise, threatened by illegal fishing operations within its marine refuge. We have built key relationships with marine scientists from Mexico and the U.S. as well as other NGOs working toward the recovery of this dwindling species.” After Operation Milagro, the R/V Martin Sheen set sail for Costa Rica, where it will conduct studies of coastal Pacific marine ecosystems across Central America. Specifically, the group of experts on board will be measuring contamination levels, water quality and the biodiversity of marine life, according to a press release. They also will be seeking opportunities to promote sustainable tourism.

One of the biggest targets for study, Sea Shepherd says, is oceanic contamination from plastic. According to previous research trips, the Martin Sheen crew found “that even in highly remote locations, there is an infiltration of plastic debris, from large ghost nets to micro-plastics,” Oona Layolle, former R/V Martin Sheen captain, said. For the Costa Rican leg of the trip, French captain François Martin will take control of the helm.

A second goal of the four-month project is community outreach at local schools in Costa Rica. As part of that effort, students from María Vargas de Ciruelas and El Roble schools in Alajuela, who won an environmentally themed art contest, will get the chance to spend the day aboard the R/V Martin Sheen with parents and teachers.

Coincidentally, one person who won’t be joining the crew aboard the Martin Sheen is Sea Shepherd captain and founder Paul Watson, who remains a fugitive from Costa Rican justice over an incident that happened off the coast of Guatemala 13 years ago. Criminal allegations of attempted shipwrecking against a Costa Rican fishing boat and its crew are still active against Watson at the Puntarenas Prosecutor’s Office, despite a global effort to pressure Costa Rica to drop the charges.

Because Costa Rica considers Watson a fugitive, there is no statute of limitations on the charges, according to Serendero. Watson has repeatedly stated that he fears for his safety should he decide to return here to face the allegations in court. He also adamantly proclaims his innocence, and has about nine hours of video evidence to prove it. Nevertheless, prosecutors here seem unwilling – or unable – to let the matter go, despite the increasing absurdity of the case in a country that peddles its eco-friendly image abroad in exchange for tourism dollars.