‘I’m free’: Alan Gross returns to US after 5 years in Cuban prison 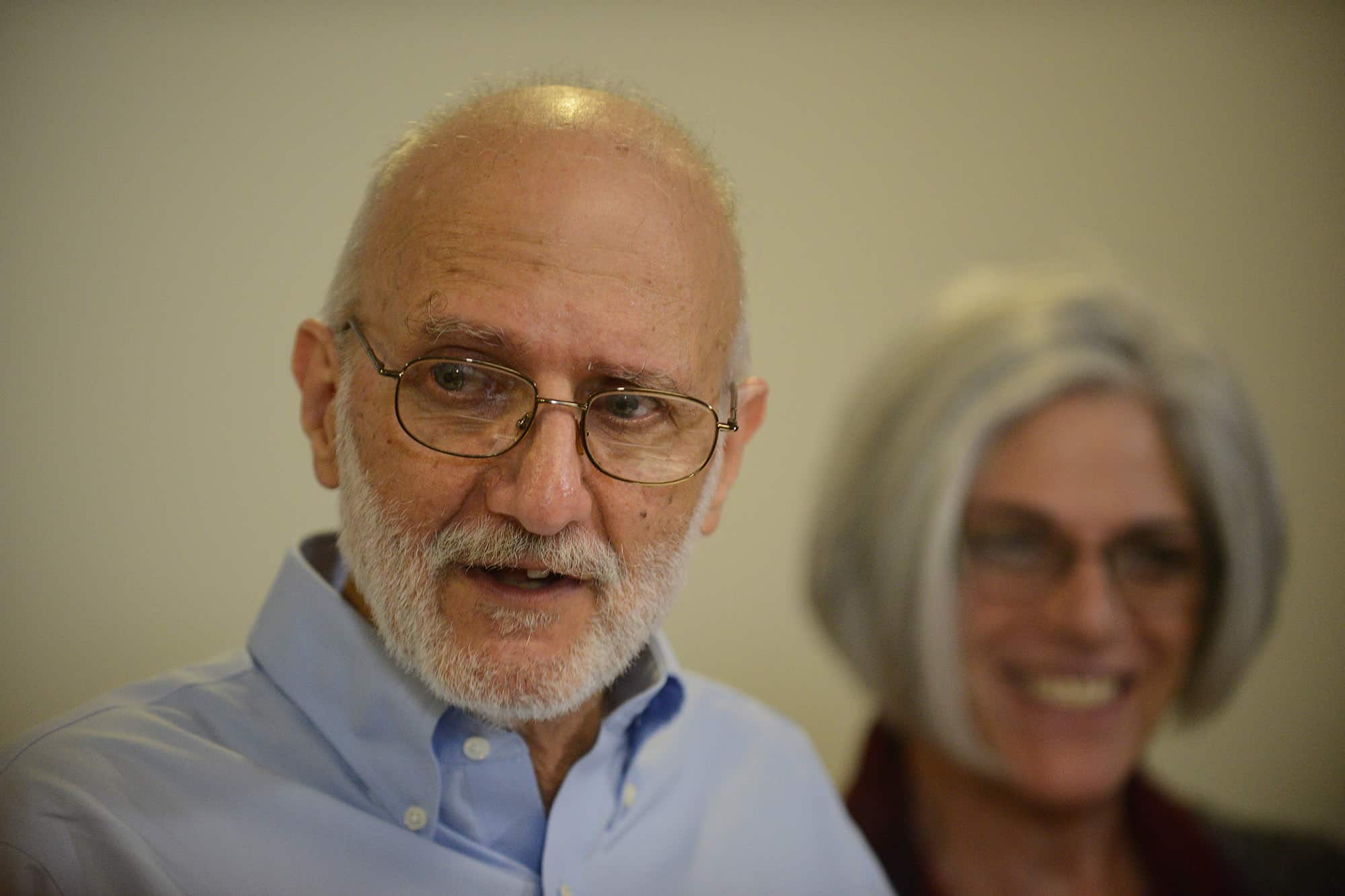 Alan Gross, with his wife Judy, speaks at a press conference upon his return to the U.S. after 5 years in a Cuban prison. (Photo for The Washington Post by Astrid Reicken)

WASHINGTON, D.C. — Alan Gross was just about at the end of the line.

Imprisoned in a Cuban military hospital for five years with arthritis and vision problems, he reportedly had lost 100 pounds, grown despondent and announced that he wanted no more visitors.

In desperation, he went on a hunger strike in April.

Gross, 65, who lived in Potomac, Maryland, was arrested in Cuba five years ago this month while working as an international aid contractor to improve Internet service and set up an intranet for Cuban Jewish communities. Cuba accused him of trying to destabilize its government by bringing sophisticated technical equipment into the country, and sentenced him to a 15-year jail term.

On Wednesday, he was released. He arrived in the United States, amid jubilation from relatives, friends and Jewish groups, as the government announced that it was restoring full diplomatic relations with Cuba for the first time in decades.

At an emotional news conference at his lawyers’ Washington office, Gross sighed and said, “This is great.”

“Today is the first day of Hanukkah, and so far it’s the best Hanukkah that I’ll be celebrating for a long time,” he said. “What a blessing it is to be a citizen of this country.”

He thanked his wife, Judy, President Barack Obama, members of Congress, Jewish groups and other religious communities. He also praised the people of Cuba, calling them “incredibly kind, generous and talented” and absolving them of any blame. “In no way are they responsible for the ordeal to which my family and I have been subjected.”

Gross, who is missing several front teeth, seemed upbeat as he spoke to reporters for about 10 minutes.

Jill Zuckman, the family’s spokeswoman, said that Gross was notified of his release on Tuesday morning in a phone call with his lawyer, Scott Gilbert. When Gross first heard the news, there was a long pause on the line, then Gross said to Gilbert: “I’ll believe it when I see it.”

Gross’s wife boarded a U.S. plane at Joint Base Andrews, outside Washington, on Wednesday morning bound for Havana, along with Sens. Patrick J. Leahy, a Vermont Democrat and Jeff Flake, an Arizona Republican and Rep. Chris Van Hollen, a Maryland Democrat.

The group spent about 30 minutes on the ground in Cuba meeting with Gross before they boarded the plane back for the United States.

A bowl of popcorn and a corned beef sandwich on rye with mustard awaited Gross when he stepped onto the aircraft — two delicacies Gross said he’d missed during his five years in captivity. Gross also ate latkes with apple sauce and sour cream, a traditional dish to celebrate the Jewish holiday of Hanukkah. This photo courtesy of the office of U.S. Senator Jeff Flake's Twitter account, shows Alan Gross, center right, as he arrives from Cuba on Dec. 17, 2014 at Andrews Air Force Base, Maryland. AFP/Jeff Flake/Handout

In the Cuban prison, Gross lost much of his weight and had a number of health issues, Zuckman said. His front teeth have fallen out, and others had begun to break apart. He will be seeing physicians in upcoming days, she said.

After his release, Gross spoke to his two daughters on the phone and told them both, “I’m free.” He also talked to Obama and thanked him for negotiating his release.

Meanwhile, family members and Jewish groups that had lobbied for his release rejoiced.

“We’re like screaming and jumping up and down,” when they learned of his release, Gross’s sister, Bonnie Rubinstein, told the Associated Press from her home in Texas.

Her assessment was echoed by Gross’s former rabbi, Jack A. Luxemburg, at Temple Beth Ami in Rockville, Maryland, who said “for many people of good faith, this is a season of miracles. It should touch everybody’s hearts.”

In his old Potomac neighborhood, Arnie Feldman, 75, a retired orthodontist who lived next door, said he was delighted, and noted that Gross had been imprisoned for a long time. “He’s missed a lot,” Feldman said.

A gregarious, bearded man who often played the mandolin in the backyard, Gross wore a blue shirt and khaki-colored pants as he stepped off the jet at Andrews on a sunny, pleasant morning. Alan Gross, alongside his wife Judy, waves as he leaves a press conference after being released by Cuba on Dec. 17, 2014 in Washington, D.C. Saul Loeb/AFP

In communist Cuba, which has tried to limit Internet access, Gross had been working through a pro-democracy project of the U.S. Agency for International Development.

He testified during his trial in Cuba that everything he brought into the country passed through customs. But he had made numerous trips to the island in a short period of time and attracted the attention of Cuban security officials.

The Cuban government accused Gross of “actions against the integrity of the state.”

His wife insisted that his motives were humanitarian. “He’s not a political guy,” she said in a 2012 interview with The Washington Post.

“I asked him once if he wanted to run for the state Senate — he’s so outspoken,” she said. He declined. “I hate politics,” she said he told her.

Gross grew up in Baltimore, helping in his father’s window-cleaning business. He earned a master’s degree in social work and got involved in oversees humanitarian projects in the Middle East and Africa.

Cuba was his latest project.

Last spring, he went on a hunger strike to protest his treatment by the Cuban and U.S. governments, his attorney said at the time.

“I am fasting to object to mistruths, deceptions and inaction by both governments, not only regarding their shared responsibility for my arbitrary detention, but also because of the lack of any reasonable or valid effort to resolve this shameful ordeal,” Gross had said in a telephoned statement to his legal team.

In the years since Gross’s imprisonment, his family had often talked about his desire to be reunited with his mother, Evelyn Gross, who had lung cancer. But Evelyn Gross died in June at 92.

Ed Gross said the family thought the administration should have long ago swapped the five Cuban intelligence officers convicted in the United States in 2001 in exchange for his cousin’s return.

“I don’t want to throw cold water on everything,” he said. “Obama did do it, finally. But Alan has suffered a lot.”

He said he first learned about Alan Gross’s release when his secretary texted him with the news. Ed Gross turned on the radio and couldn’t believe the reports. He had just spoken to his cousin on the phone a couple of weeks ago, he said, and he made no mention of any imminent release.

“He and I were talking about when he comes back he’s going to have a big book deal, and he should be making notes, and he was telling me about the drawings he was doing,” Ed Gross said.

“He talked about Nationals baseball,” he said. “He was able to watch some games. He’s a very upbeat kind of guy. He’s a very optimistic sort of person. He’s not a person to wallow in his own sorrow.”