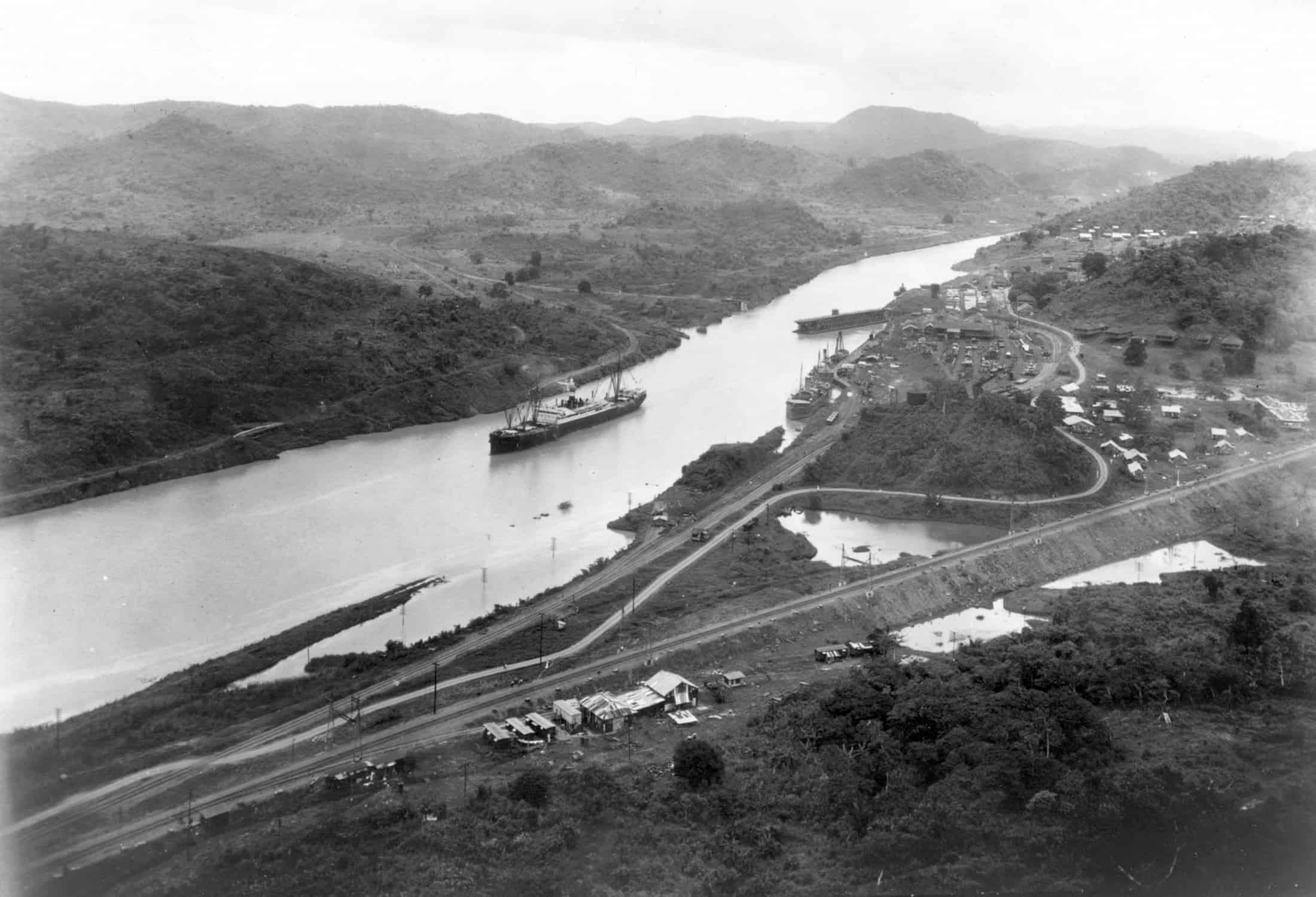 This August 15, 1914 file photo shows the New York-registered SS Ancon crossing the Culebra cut of the Panama Canal on opening day, as seen from Cerro Luisa, looking north. Today the canal marks the 100th anniversary of the Panama Canal, considered to be one of the 20th century's marvels of engineering. (AFP PHOTO/US LIBRARY OF CONGRESS)

See the Panama Canal in facts and figures

PANAMA CITY — Panama celebrated the 100th anniversary of its famous canal Friday with a ceremony and gala, even as it scrambled to make up lost time by enlarging it to maintain its competitiveness in the 21st century.

The canal, an engineering masterwork that transformed global commerce, opened on August 15, 1914, connecting the Atlantic and Pacific Oceans and saving ships the long, dangerous trip around South America.

Guests marking the anniversary soaked up the sun at the canal’s Miraflores locks, singing “Happy Birthday” to the waterway and snapping pictures of a four-meter (13-foot) chocolate-cake replica of the locks as dancers performed traditional Panamanian numbers.

Chief administrator Jorge Quijano said it was just a normal work day for the canal, which handles five percent of global maritime trade.

“Today is a regular day of operations because like every day an average of 35 ships will shorten the distance between the Atlantic and the Pacific,” he said.

The Greek vessel Galini inaugurated the canal’s second century, traveling the 80 kilometers (50 miles) from the Caribbean Sea to the Pacific, 100 years after the U.S. steamship Ancon opened the waterway.

“There’s not just one Ancon steamer for the centenary of the canal. There are many,” said Quijano, who was later to host a VIP gala.

But Panama is battling to keep the canal relevant as it starts a new century.

The Suez Canal in Egypt has larger capacity, cutting into Panama’s share of global shipping traffic, and recently launched construction on a $4-billion “new Suez Canal” running parallel to the original.

Closer to home, Nicaragua, which fought Panama more than a century ago to host the first canal across Central America, has emerged as a modern-day rival.

The country has launched plans for a $40 billion, Chinese-built canal that would be able to handle modern mega-freighters too big for the Panama Canal’s current dimensions.

To fend off the competition, the Panama Canal is adding a third set of locks to nearly triple its capacity.

The $5.3 billion expansion will allow it to handle so-called “Post-Panamax” ships with a capacity of up to 15,000 containers, instead of the current maximum of 5,000.

But the project has been plagued by delays, strikes and a bitter dispute over $1.6 billion in cost overruns with the consortium of companies carrying out the upgrade.

The expansion was initially scheduled for completion this year — in time for the anniversary — but has now been pushed back to January 2016. Dancers perform during the celebration of the 100th anniversary of the Panama Canal, on Friday in Panama City. AFP

France launched the first attempt to build a canal across Panama in 1880, but tropical diseases, engineering shortfalls and financial problems forced it to abandon the project.

In all, an estimated 27,000 workers from around the world died building the canal, mostly of malaria and yellow fever.

The United States took over in 1904, after sending warships to back Panama’s secession from Colombia and signing a treaty with the newly independent country for control over the 16-kilometer-wide Canal Zone.

The strategically crucial U.S. enclave became a source of resentment in Latin America at being considered the U.S.’s backyard.

In 1977, U.S. president Jimmy Carter and his Panamanian counterpart Omar Torrijos signed a treaty handing the canal over to Panama on December 31, 1999.

Operating the canal has been a boon for Panama, bringing in about $1 billion a year — equivalent to 10 percent of the government’s revenues and six percent of the national economy.

The waterway provides 10,000 jobs and has helped make Panama one of the most dynamic economies in the region, with 8.4 percent growth last year.

“It was born as a colonial enclave, and today it’s an engine of development,” said political analyst José Isabel Blandon.