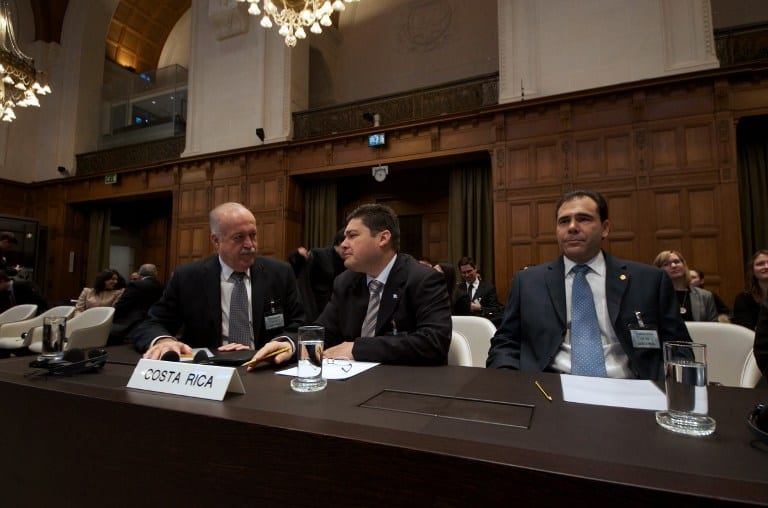 Costa Rica's ambassador to the Netherlands, Jorge Urbina, left, speaks with a member of the Costa Rican delegation at the International Court of Justice in The Hague, on Dec. 13, 2013. ( Nicolas Delaunay/AFP)

The government of Costa Rica announced Tuesday that it would file a new complaint against Nicaragua at the International Court of Justice at The Hague, this time for alleged seizure of maritime territory offered by Managua to international oil companies.

“We’re working on a complaint against Nicaragua for commandeering and offering Costa Rican maritime territory and arbitrarily and unilaterally setting maritime limits to mark what they say are their oil blocks,” Costa Rica’s Foreign Minister Enrique Castillo said on Tuesday.

The top diplomat said that the complaint would be presented at The Hague on May 8, the day President Laura Chinchilla leaves office and is replaced by the winner of an April 6 runoff election.

Castillo added, “We also are working on an agreement (for the United Nations) between Colombia, Panama and Costa Rica to express our opposition to Nicaragua’s attempts to extend its claims.”

The minister did not offer further details.

In July 2013, the government of Costa Rica claimed that an important number of blocks offered by Nicaragua for oil concessions in both the Pacific Ocean and the Caribbean were in Costa Rican waters.

At the time, the foreign minister in San José sent a protest letter to his counterpart in Managua demanding the “immediate withdrawal” of printed material Nicaragua was using to promote its oil concessions.

According to Costa Rican authorities, the document showed 18 areas for oil exploration and exploitation in the Pacific and 55 in the Caribbean that did not belong to Nicaragua.

Nicaraguan President Daniel Ortega has said that Costa Rica’s allegations lack substance and that the concession territories offered by his government are clearly defined in a November 2012 ruling from the world court on maritime borders between Nicaragua and Colombia.

The announced complaint joins two others that both Central American nations have pending before the court.

In November 2010, Costa Rica filed the first complaint against its northern neighbor for the alleged seizure of Isla Portillo, also known by Costa Rica as Isla Calero and by Nicaragua as Harbour Head, a small territory of 3 square kilometers along their shared border.

In March 2011, the court ordered both countries to leave the disputed territory while the issue is resolved, among other precautionary measures.

In December 2013, Nicaragua filed a complaint against Costa Rica alleging that the construction of a highway near the San Juan River had caused environmental damage to the river bed.

Both controversies, among other diplomatic incidents, have driven the relationship between both countries to historic lows.

On Monday, the Nicaraguan government expressed its interest in reopening dialogue with a new administration elected in Costa Rica’s upcoming April 6 runoff.

On Sunday, Costa Rica held elections to replace President Laura Chinchilla, but none of the 13 candidates running exceeded the minimum 40 percent of votes required. Ruling party candidate Johnny Araya and opposition party candidate Luis Guillermo Solís will go head-to-head for the job in the April election.