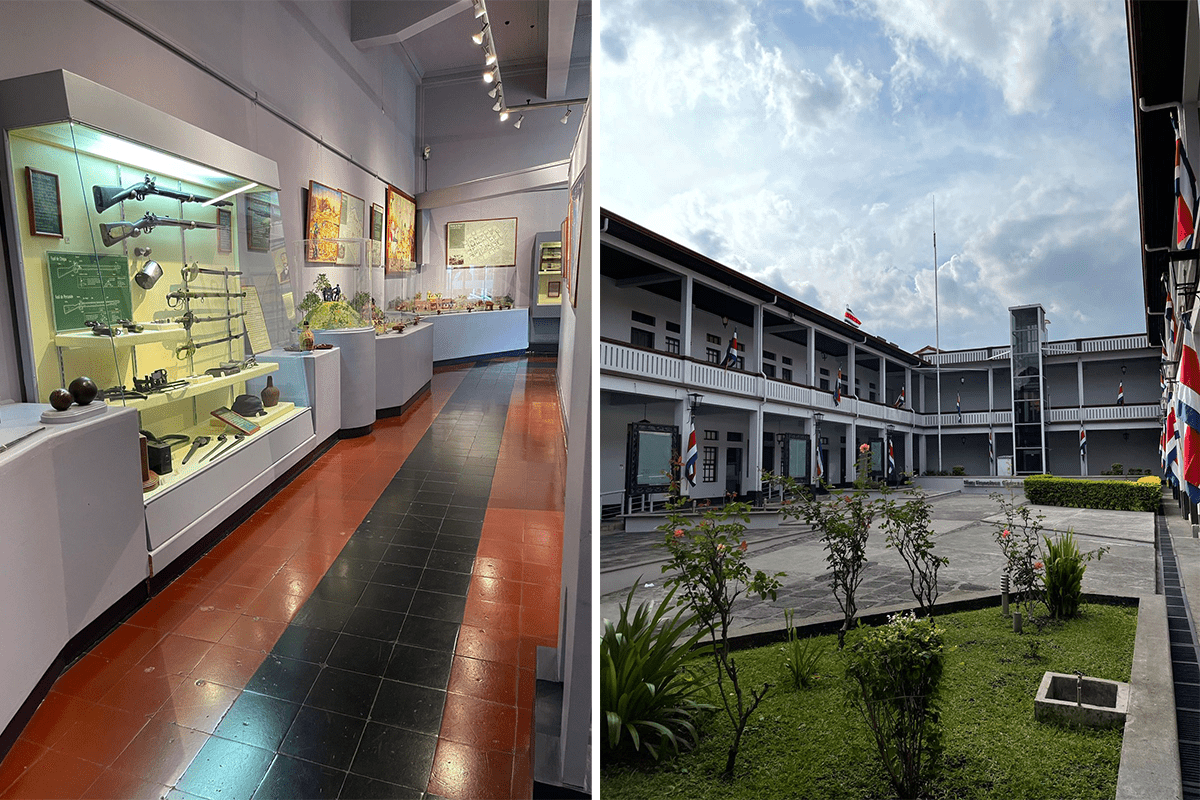 At the end of November last year, Alajuela’s centerpiece, the Museo Histórico Cultural Juan Santamaría, in order to better preserve the historic architectural heritage, and improve its services, closed its doors to the public for structural maintenance work on its buildings.

It has now been announced that museum will be reopening its starting, tomorrow, Tuesday, February 8, 2022, from Tuesday to Sunday, from 9 a.m. to 5 p.m., with free admission for the public.

The museum’s history goes back to before it was even built. In 1822, don Rosario Carrillo and wife María Fernández donated the land for a “house of education” and a hermitage in honor of St. Michael the Archangel. A small shrine to the archangel has been part of the museum’s displays.

The military quarters were built during the era of strongman Tomás Guardia (1870-1882), whose home was across the street to the west. Rumors still persist that tunnels connected the house, the fort and several other buildings.

In 1974, the Legislative Assembly created the museum by law, but it didn’t open until 1981 and then was limited to the jail complex. The military site housed a high school and later an educational research project.

With the reopening, tourists and locals alike will again be able to learn about the events that happened from 1856-1857 as well as the permanent exhibition “Caminos de Libertad” (Paths of Freedom).

Visitors will read and hear about the details contained in the murals of the Manuela Santamaría Hall, created between 1957 and 1958 when the then Civil Guard of Costa Rica (today the Public Force) operated in the current building of the MHCJS.

There is also a temporary exhibition called “Forma y Letra: diseño tipográfico”, in the Luis Alberto Salas Corrales Hall, located on the second floor of the building that will be open until April 10, 2022.

“The impact of the pandemic was strongly felt in our country and around the world. It is for this reason that with great joy we can say that, despite so much adversity, the Museo Histórico Cultural Juan Santamaría was able to take advantage of the opportunity to improve its facilities and make minor repairs, in order to provide better service to those who visit the Museum and make use of its facilities.

All this, without losing sight of the social, educational and cultural purpose of this distinguished institution, which is an architectural jewel in the heart of the province of Alajuela,” said María Elena Masís Muñoz, director of the Museo Histórico Cultural Juan Santamaría.

When visiting the Museum, all safety protocols against the spread of Covid that are established by the Ministry of Health will be taken into account and hand washing, correct use of masks and social distancing will be applied.

You can visit the Museum from Tuesday to Sunday, from 9 a.m. to 5 p.m. Admission is free