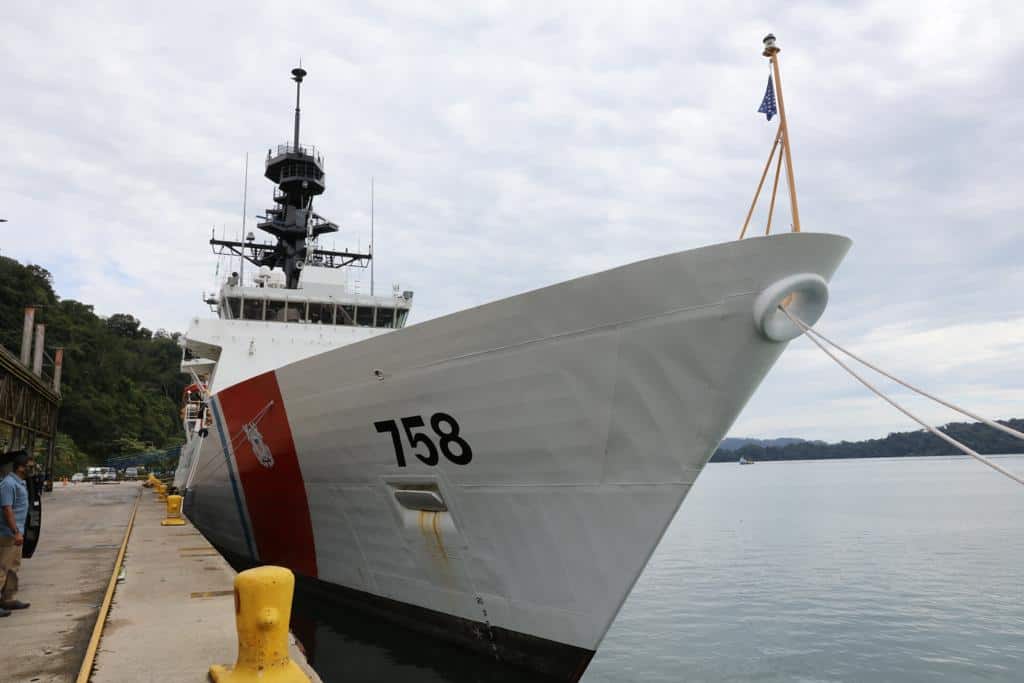 Today in Golfito, the United States Coast Guard (CGC) vessel STONE completed a six-day patrol in search of illegal, unreported and unregulated (IUU) fishing in collaboration with the National Coast Guard Service (SNG) of Costa Rica. This patrol is part of Operation Southern Shield, a one-month mission that will include joint patrols in maritime waters of the Exclusive Economic Zones of Costa Rica, Panama, Colombia and Ecuador. Operation Southern Shield is the first US Coast Guard patrol dedicated to illegal fishing in Costa Rican waters.

As part of the operation in Costa Rican waters, two members of the SNG joined CGC STONE in patrolling the waters of Costa Rica that are part of the Eastern Tropical Pacific Marine Corridor, including a circumnavigation of Isla del Coco. Since regional threats require joint solutions, collaboration with foreign partners is one of the pillars of the US Coast Guard’s 10-year plan, Strategic Outlook on IUU Fishing, to address threats from this activity.

The navigation program allows Coast Guard members from Costa Rica and the United States to participate in inter-deck training and exchange of best practices, helping both services respond more effectively to common threats.

“Illegal, unreported and unregulated fishing ravages our oceans and affects us all,” said Marcos Mandojana, Chargé d’Affaires of the US Embassy in Costa Rica. “As Costa Rica, Panama, Colombia, and Ecuador create the Eastern Tropical Pacific Marine Corridor, the United States joins these countries in protecting their natural resources and enhancing the stability, security, and economic prosperity of the region.

The CGC STONE patrol, in collaboration with our Costa Rican partners, will help equip the National Coast Guard Service to face the threat of illegal fishing in the vast maritime territory of Costa Rica.”

“Our territorial waters make it essential to work in collaboration with regional partners to patrol against illegal fishing and other maritime threats,” said Michael Soto, Minister of Public Safety. “As part of Operation Southern Shield, the National Coast Guard and our US counterparts are sharing best practices in order to respond to shared threats and better serve the public.”

Transnational criminal organizations routinely use fishing boats to introduce drugs or other illicit goods into Costa Rican territory. In the last 11 months, Costa Rica has seized at least six fishing vessels, with 4.5 tons of cocaine and 11 tons of fish.

In July, the United States Coast Guard conducted an advanced vessel boarding and search course for members of the SNG, the Drug Enforcement Police, and the Judicial Investigation Agency. As a direct result of this September training, the OIJ identified a hidden compartment on a fishing vessel that allowed the seizure of 1,500 kilos of cocaine.

Illegal, unreported and unregulated fishing has replaced piracy as the main threat to global maritime security. Illegal fishing costs the world tens of billions of dollars each year. According to the Food and Agriculture Organization of the United Nations (FAO), IUU fishing can account for up to 26 million tonnes of fish caught annually. IUU fishing also threatens the livelihoods of coastal communities that depend on sustainable fish stocks for income and food security.

The CGC Stone, based in North Charleston (South Carolina), is a 50-foot vessel of the Legend class, the largest class of patrol boats in the United States Coast Guard. The CGC Stone became operational in early 2021 as part of Operation Southern Cross, an IUU fishing patrol operation in the South Atlantic Ocean. Operation Cruz del Sur included stops in Guyana, Brazil and Uruguay.