Members of the Costa Rican Fishing Federation (FECOP) spent two hours last Tuesday explaining to congress why Costa Rica needs to improve on its protection of its valuable tuna resources — not only for the sport fishing fleet they represent, but for the benefit of all national fishermen.

A little history is needed to completely understand the tuna purse sein industry in Costa Rica. The country has no purse sein fleet, so they sell licenses to foreign flagged boats to fish the territorial waters. Costa Rica’s territorial waters are 11 times greater than its terrestrial area. Before 2014, they could fish anywhere beyond 12 miles of the coast. In 2014, a decree moved them out to 45 miles from the coast as well as protecting some sea mounts and the area around Coco Island. Studies since have showed that the area of 45 miles has become a great recruitment area, not only for tuna, but for other species like dorado (dolphinfish), marlin, and sailfish, which are often bycatch in tuna nets, as well as sharks, rays, turtles and dolphins. As these tunas grow, they often move offshore and are available to purse sein boats.

A study done in 2018 comparing historical bycatch data of purse seiners in the first 45 miles showed that in one year, more than 25 tons of what would have been marlin bycatch was saved.

In a video made in Venezuela by President Nicolas Maduro, he boasts of a Venezuelan vessel unloading in Venezuela with 1,400 tons of tuna from one fishing trip in Costa Rican waters. That is more than the entire Costa Rica’s commercial fleet catches in one year.

At the recent meeting with the Legislative Assembly, a change of the fishing law was discussed. Law project 21.316 proposes to move the tuna purse sein fleet out to 60 miles from 45 miles.

All fishing sectors agreed 60 miles is not nearly enough. Artisanal, sport and tourist fishing as well as most of the longline fleet are required to fish by law in the first 40 miles from the coast. That is well over 1,000 boats competing in the same area, while the foreign tuna fleet enjoys a much more expansive area.

A team from FECOP and another NGO, Marviva, have been working together for several months to supply the science to support the need to improve on the coastal fishing area of the country. The tuna industry claimed there was not enough science to support moving the tuna fleet beyond the current regulation of 45 miles.

In the past, as much as 25,000 tons of tuna were taken in Costa Rican waters annually. Now, all tuna taken in Costa Rica must be sold to the cannery in Puntarenas. Their yearly needs are around 9,000 tons. Since the Tuna Decree in 2014, the average catch per net set by a seiner has gone from around 12 tons to 20 tons per set. They are able to fish less and catch more to meet the quota of 9,000 tons. They can meet their quotas fishing in less area and reduce competition amongst the mational fishermen.

Wednesday, the congressional committee voted for an extension of the area prohibited by tuna seiners to include the first 100 miles from the coast. By doing so, the bill passes the first hurdle and moves to the next step before it may become law. 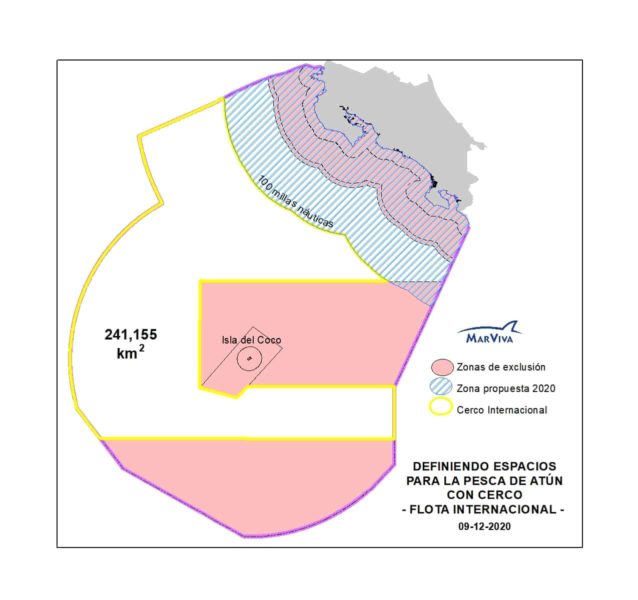 Another reason this is so important is the ruling last week by the Inter-American Tropical Tuna Commission.

The commission could not agree to extend its current resolution for tropical tuna species for 2021, leaving the entire fishery for big eye, yellowfin, and skip jack tuna without management measures. They also did not extend the regulations in place for fish aggregating devices which greatly increase bycatch and are currently illegal in Costa Rica. The ruling goes into effect January 1, 2021 greatly enhancing the odds of overfishing tuna stocks and harming other species caught along with tuna as bycatch.

Nicaragua and Venezuela backed Colombia in blocking the final proposed solution to have the conservation measure for 2021, but from start, it was Ecuador who blocked the measures on FADs suggested by the scientific staff, and that position was backed by El Salvador and the United States. The rest of the countries were in favor of addition FAD restrictions.

Despite the clear scientific advice to, at a minimum, keep these provisions intact, the objection of one party blocked their extension. As a result, the sustainability of the region’s tropical tuna fisheries and marine ecosystem is now at risk.

Todd Staley has run sportfishing operations on both coasts of Costa Rica for over 25 years. He recently decided to take some time off to devote full time to marine conservation. Contact him at [email protected].