History came to Selma, Ala. — then left it behind 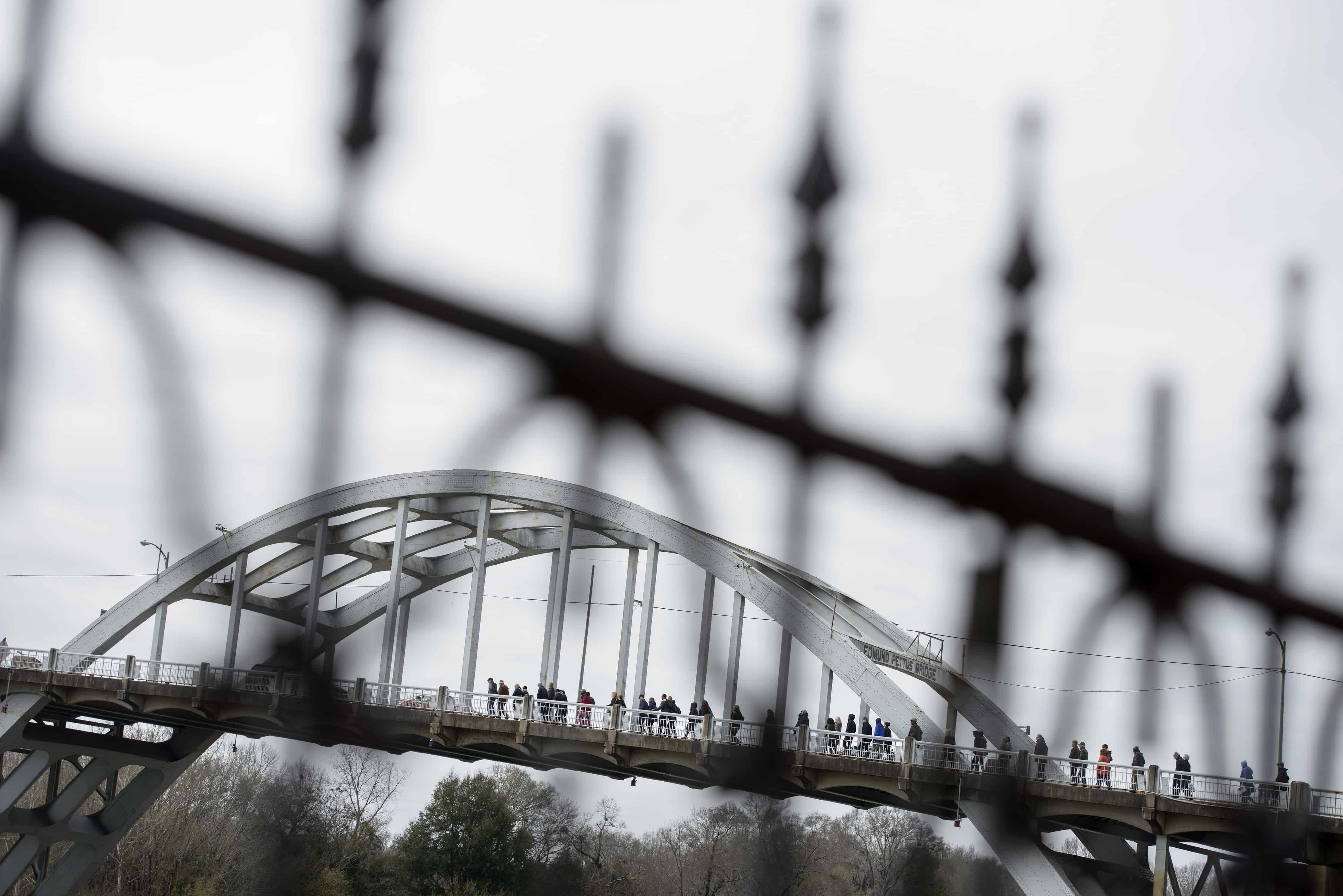 People walk towards the Edmund Pettus Bridge on March 6, 2015 in Selma, Alabama. March 7 will mark the 50th anniversary of Bloody Sunday when civil rights marchers attempting to walk to the Alabama capital of Montgomery for voters' rights clashed with police. (Brendan Smialowski/AFP)

Most weekdays for the last 10 years, Letasha Irby has commuted across the Edmund Pettus Bridge in Selma, Ala. Irby, 36, a black mother of two, lives about a 20-minute drive from the iconic bridge named for a Reconstruction-era Alabama Ku Klux Klan leader and U.S. senator, and the spot where demonstrators were set upon by police in an event known as Bloody Sunday.

The events of March 7, 1965, cleared the way for a historic march from Selma to Montgomery and passage of the federal Voting Rights Act. But Irby, 36, says she never much thought about how the events might have shaped her destiny until the past year, when she became more involved in efforts to unionize her shop, which makes auto parts, and which pays her $11.33 hourly.

And not until Oprah Winfrey came to town earlier this year to promote Hollywood’s movie about the struggle did Irby ever get out of the car and cross the bridge on foot to trace the steps of the marchers — who were tear-gassed, beaten and trampled by horses after orders from Gov. George Wallace — and the thousands who crossed two weeks later with Rev. Martin Luther King Jr.

She was struck by how many more details she noticed on foot: the beauty of the Alabama River below, and the weight of an unfulfilled promise that still hangs over the city.

Before Bloody Sunday, Selma was racially mixed, though far from integrated. The 1960 census shows its 28,385 residents about equally divided between black and white. The town has since shrunk to 19,912 in 2013, and many of its white residents have left-by 2013, four in five residents were black. More than in 1960, it’s mired in poverty. The median household income for the years 2009-13 was $22,478-about half of Alabama’s median household income-and 41.9 percent of Selma residents lived below the poverty line.

“I can appreciate what they went through back then with the civil rights and the voting rights,” Irby said last month at her mother’s modest home in Orrville, which she also shares with her son, 10, and daughter, 4. “Now we’re fighting for workers’ rights. I can’t afford a house on $11.33. I can’t save for college on $11.33. All you can do is pay the bills.

“With all that’s gone on in Selma, it should be a big tourist attraction like New York City, all lit up,” Irby said. Instead, it’s “buildings all closed up, run down. It should be better than that.”

This weekend’s 50th anniversary of Bloody Sunday is drawing thousands of politicians, celebrities, and civil-rights leaders to Selma, and bringing together many older residents who were there that day. President Barack Obama, who came to Selma as a candidate in 2007, will speak at the bridge on Saturday. He’ll use the occasion to frame his administration’s own civil rights initiatives and investigations after a year in which clashes between white law enforcement and black citizens from Ferguson, Mo., to New York and Cleveland spurred examinations into excessive force and institutional racism and a debate on how far toward racial equality in the nation has really come.

The Obama administration also has been challenging voter ID laws in southern states that advocates say disenfranchise minority voters and would set back the gains of the 1960s. These, paired with the theme of economic inequality, will become rallying cries for the Democratic base in the 2016 presidential election. A home is seen on March 6, 2015 in Selma, Alabama. Brendan Smialowski/AFP

“When we look at where we were and where we are, we can give some thanks to the Almighty God,” said Rev. F.D. Reese, a local voting-rights activist who marched in Bloody Sunday and later led the march to Montgomery with King. “We can always look and see some progress that was made.”

But many people who live or work in Selma today say it’s not enough to be a symbol. They’re still fighting the aftershocks of what happened there so many years ago and want some help. Voting rights gave them some dignity and helped them to elect two black mayors, black representation in Congress and a black president. But overall white flight, cash-strapped schools, and the changing economy have left this Black Belt city struggling.

Rep. Terri Sewell, Alabama’s first elected black congresswoman, is an ambassador of the city. She was the first black valedictorian at Selma High School, went to Princeton and Harvard, became a lawyer, and was elected to the House in 2010 to a district that covers Selma.

“Selma is now,” said Sewell. “It is relevant for our fight for human rights and social justice around the world. What the people of Selma need are better opportunities. It’s not enough that the world come and walk across the bridge.”

Advocates for the city have called for expanding the Interstate system in a way that drives traffic to the city, outside funding for tax incentives for companies to move to the area, more money for early college education in area high schools, and millions of dollars to fulfill a Clinton administration vision for a voting-rights tourism center including a high-tech theater, parking, staffing, and equipment.

“The United States of America owes Selma,” said James Perkins, who served as the city’s first black mayor. “The sacrifices that were made here to ensure that a Cory Booker could sit in the Senate house, and to ensure that a Barack Obama could be president of the United States or a James Perkins could become mayor of this city — that ground-zero experience took place right here in Selma, Alabama.

“If this government has the heart to rebuild Iraq and other foreign lands as a consequence of their ground-zero experience, it should do no less for Selma. That’s where I’m coming from,” Perkins said. “To see our schools now back at 90, 95, 99 percent black: that hurts.”

Some black Selma residents are more optimistic about the city’s legacy than others.

“Selma, Alabama, was the place for us to raise our children, and I sincerely doubt we could have had the success” anywhere else, said Johnny Crear, 78, whose five children are college graduates.

Crear was working in Selma’s Good Samaritan Hospital’s administration office on Bloody Sunday and stayed at the hospital all night.

“No one anticipated that the law enforcement people would be as brutal as they were. Some people came in cabs, cars, walking, but the numbers just kept growing,” said Crear, who became hospital administrator. Johnny Crear, who was working in Selma's Good Samaritan Hospital's administration office on Bloody Sunday, fears younger blacks are missing the most important lesson of the 1960s. “Go and vote,” he said. Dan Przygoda/Bloomberg News

It’s a given that last summer’s police killing of teenager Michael Brown in Ferguson stirred up painful memories in Selma, Crear said, but he fears younger blacks are missing the most important lesson of the 1960s.

“Go and vote,” he said. “Change comes about when citizens participate in their government. That’s when their voice gets heard. History does repeat itself.”

Joanne Bland, 61, grew up in the George Washington Carver Homes public housing across from Brown Chapel, a staging area for the protests. She was 11 when she joined the Bloody Sunday marchers.

“You could outrun the men on foot but you couldn’t outrun the men on horses. What I remember were the screams. I thought they were killing the people down front. They were just beating people-old, young, black, white, men, women,” said Bland. Two weeks later, she walked the first leg of the Selma-to-Montgomery march.

“I know it made me what I am today, but I didn’t realize the impact it had on my life till much later,” said Bland, a former director of the National Voting Rights Museum and Institute in Selma. “Whenever I saw anything I thought was wrong, I cried out loud and long till somebody did something.”

Bland became a legal specialist in the Army and lived in Germany before being reassigned back to the U.S. Blacks nationwide are still struggling for fair treatment by police and opportunities, Bland said. “Ferguson highlights the problem. Ferguson brought to light that the struggle still continues.”

Obama’s election is a sign of progress, and the president is doing the best he can to confront lingering prejudice, Bland said. Still, she admits, she sometimes gets frustrated: “He’s such a gentleman and I want him not to be a gentleman.”

She doesn’t sugar-coat her take on how Selma is faring today. “Oh please, look around,” she said. “And it’s so ironic because Selma gave so much to the world.”

Bland’s half-sister Sadie Moss, 73, was on her way to the bridge on Bloody Sunday when she saw horses chasing the screaming marchers. She remained in the city “to help make Selma the place I knew it could be,” said Moss, who runs Selma’s McRae-Gaines Learning Center, a private center that sprang from the civil-rights movements intended to prepare students up to age 7 for school.

Once catering to middle-class blacks, the center increasingly provides a structure for children whose parents are on welfare. Many parents of the school’s 70 students can’t pay the $330 monthly tuition, Moss said.

The building is old and needs improvements. The school board president wrote a fundraising letter citing a Dallas County unemployment rate of 13.7 percent and an underemployment rate of 29.8 percent, and noted, “Living in Selma is no excuse for us to allow our children to be deprived of the very best education and the broadest possible opportunities.”

Meanwhile Irby, the union organizer, will soon get a 67- cent-an-hour raise — which, she said, feels like “giving a bum nickels and dimes.” But in her push for better wages and protections at work, she feels as if she’s picked up the modern mantle of the civil-rights era.

Selma’s struggle today is less about rights than about money, Irby said. “I felt good knowing I’m basically doing the same thing Dr. King and all the foot soldiers did.”