A key week for Costa Rica in border dispute with Nicaragua 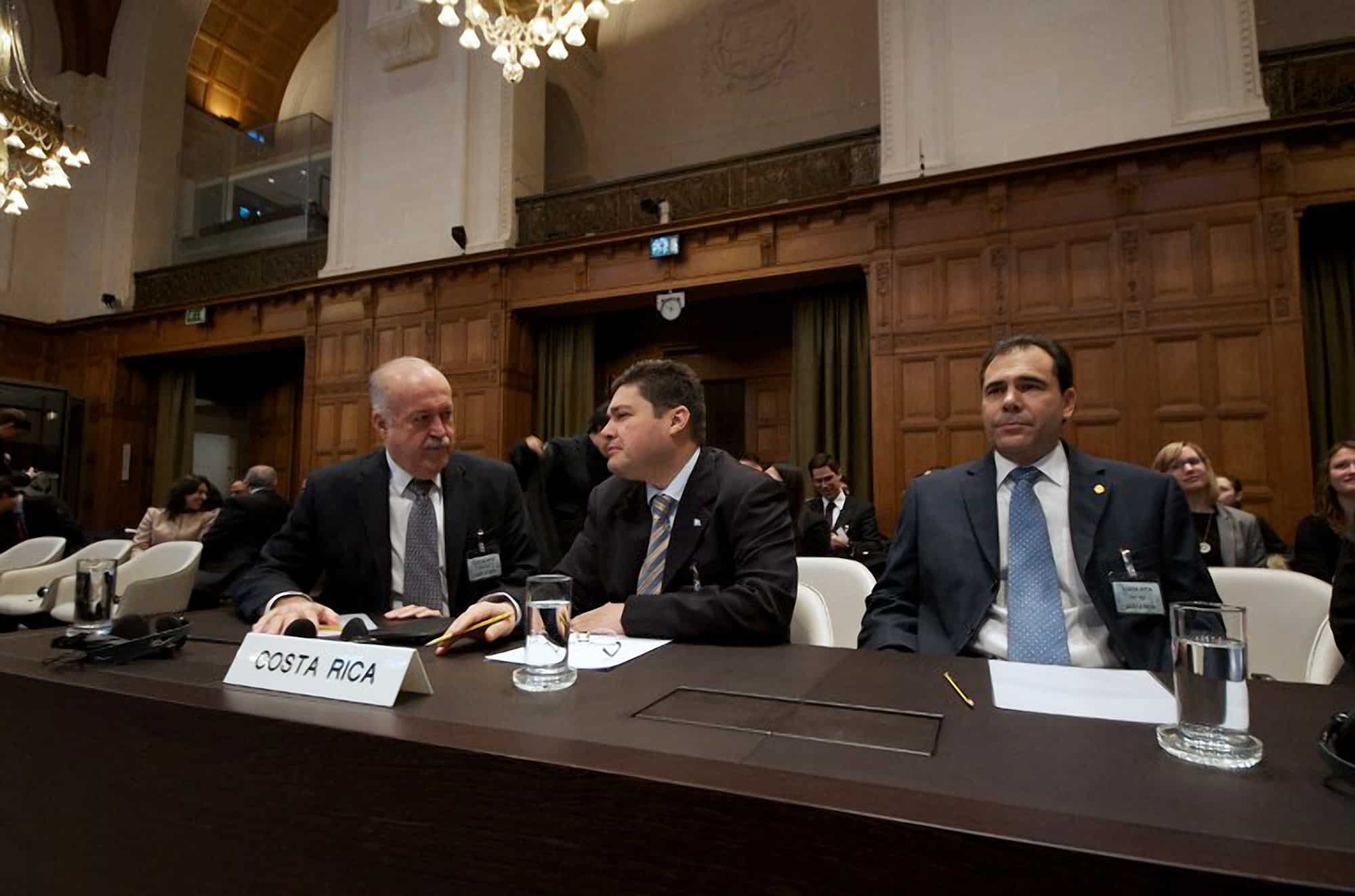 Costa Rica’s ambassador to the Netherlands, Jorge Urbina, left, leads the legal team that on Monday filed 2,500 pages of documentation in response to Nicaragua's allegations. Hearings before the court are scheduled from April 14 to May 1. (Nicolas Delaunay/AFP)

Costa Rican officials on Monday appeared before The Hague-based International Court of Justice to file a final written response in the ongoing territorial dispute with Nicaragua, the Foreign Ministry confirmed.

The case, one of two that the countries have been arguing before the world court since 2010, relates to a complaint the Nicaraguan government filed against Costa Rica in 2011 for alleged environmental damage to the Río San Juan — a natural border between both countries — during the construction in Costa Rica of a 160-kilometer road that runs parallel to the river. Nicaragua filed final arguments last August.

The river belongs entirely to Nicaragua, but the Costa Rican government has reported that Nicaraguan workers and military personnel have violated Costa Rica’s sovereignty. These “invasions,” as Costa Rica calls them, also caused environmental damage on the right bank of the river where Costa Rican territory begins, according to the complaint.

The 2,500 pages of evidence and documents filed Monday closes the written evidence stage, and oral hearings will be held from April 14 to May 1, as scheduled by the court.

Costa Rica in October 2010 denounced its northern neighbor for the alleged seizure of Isla Portillo, also known by Costa Rica as Isla Calero and by Nicaragua as Harbour Head, a small 3-square-kilometer territory along their shared border.

Nicaragua responded in 2011 with the accusation of environmental damage against Costa Rica, and currently both are being resolved in the world court as a single case.

Tuesday is the deadline for Costa Rican legal advisers to file all documents and final arguments in another conflict between the two countries regarding maritime delimitation in the Caribbean Sea and the Pacific Ocean.

In July 2013, Costa Rica claimed that an important number of blocks offered by Nicaragua for oil concessions in both the Pacific Ocean and the Caribbean actually were located in Costa Rican waters.

Nicaraguan President Daniel Ortega has said that Costa Rica’s allegations lack substance and the territories offered for concession by his government are clearly defined in a November 2012 ruling from the world court on maritime borders between Nicaragua and Colombia.