A suspect in a Thursday night shooting that resulted in two deaths near Costa Rica’s border with Panama threatened the victims on Facebook.

Assailants on Thursday night attacked a home in San Jorge, Paso Canoas, in Costa Rica’s Southern Zone, spraying the residence with bullets. Fredis Concepción Ríos, 41, and Guido Fuentes Ríos, 36, were killed, and two other men were injured and transported to a hospital in Ciudad Neily.

According to a Tico Times investigation, the Facebook profile of “Josafat Gutiérrez” contains threats directed at the victims, ordering that they “should pay what you owe them.” 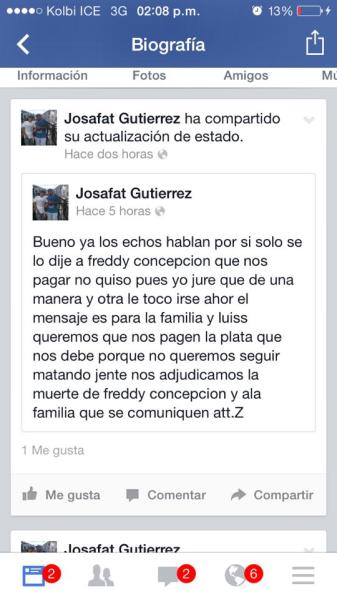 The messages also state that “they don’t want to keep killing people.”

According to a source in the judicial branch, police suspect the shooting was related to a drug trafficking debt.

The Tico Times has photographs and other evidence of the Facebook messages, which are now under investigation by Judicial Investigation Police.