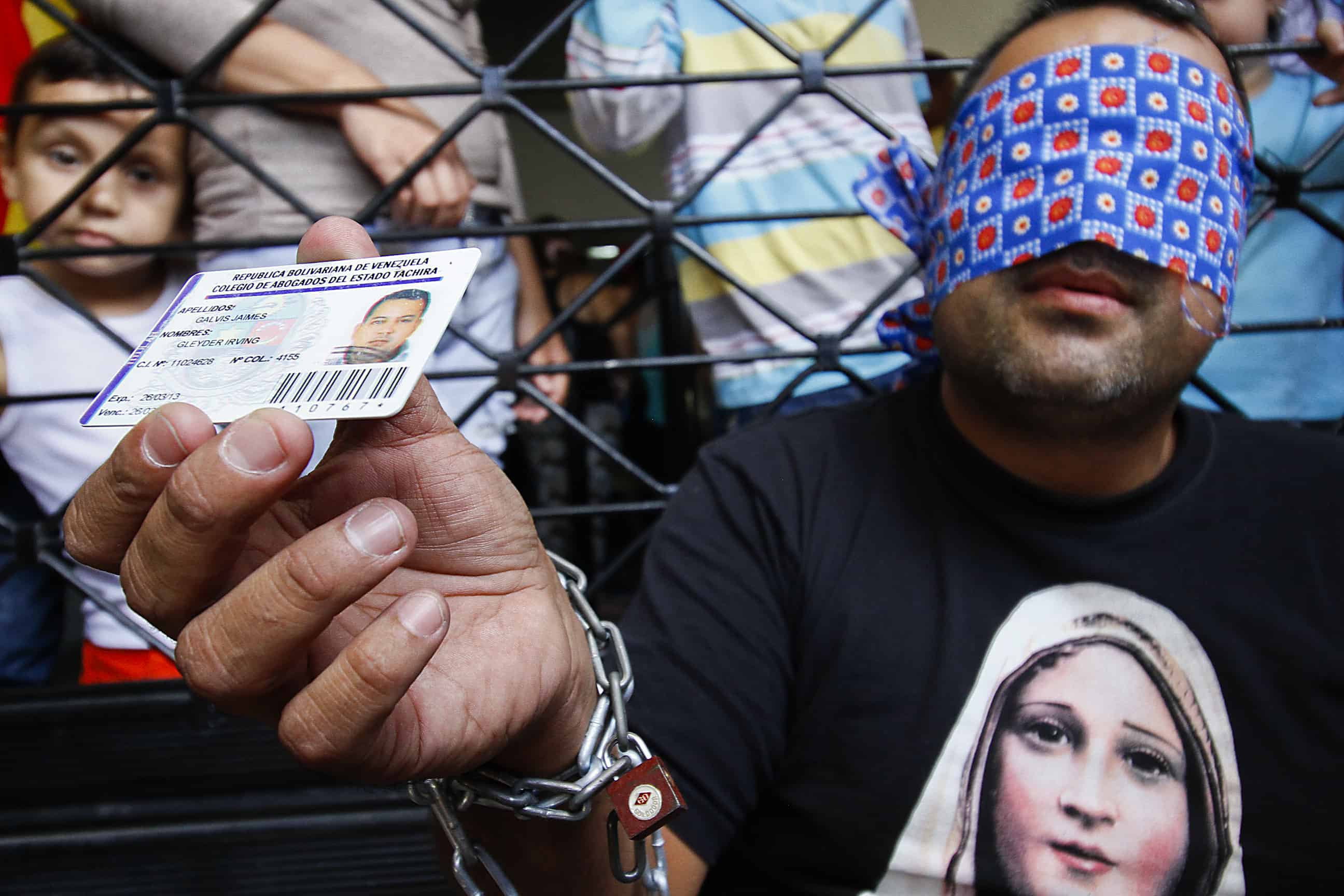 Venezuelan citizen Gleyder Irving Galvis Jaimes remains chained in front of the Colombia Immigration Office in Cucuta, Colombia, on Aug. 28, 2015 as a protest against the decision by Venezuelan President Nicolás Maduro to close the border with Colombia. (Schneyder Mendoza/AFP)

By now Venezuelans have grown accustomed to President Nicolás Maduro’s penchant for pinning his country’s economic crisis on a gamut of devils, from native capitalist speculators to Yanqui meddlers. But by sending troops to round up and deport Colombian nationals, toppling homes and separating families in the process, he may have outdone himself.

The incident was triggered by an attack last week, when unidentified gunmen left three Venezuelan border guards and one civilian injured. Maduro was quick to blame Colombia’s paramilitary forces, purportedly linked to ultra-conservative former Colombian president Alvaro Uribe, so injecting a note of political intrigue into the frontier incident.

More than 1,000 Colombian immigrants have so far been deported from the state of Tachira, in western Venezuela. The deportees, plus another 4,000 or so Colombians who fled for fear of eviction, swept up everything they could carry and rushed to the border, some wading rushing rivers to safety.

As the roundup spread, Maduro’s Bolivarian guard emblazoned each migrant’s home with a blue R, for legal residents, or a red D for demolition, in the case of undocumented immigrants, adding a chilling Gestapo flourish to this tropical version of cultural cleansing.

What’s clear is that this was one more in a series of violent incidents on this lawless frontier, where the rugged terrain and bent border officials have encouraged gangs of pirates and contrabandistas to compete for a share of the flourishing trade in stolen and smuggled wares.

Driving the violence are Venezuela’s disastrous price controls and the doctored exchange rate, which have left consumer goods from poultry to insulin in chronic short supply and created demand in a booming black market. One of the prizes is subsidized Venezuelan gasoline, which thanks to petropopulism can be bought for pennies per gallon at the pumps and fetch a handsome profit in Colombia.

Whenever such distortions arose on his watch, former president Hugo Chávez routinely answered by railing against Gringos and savage capitalists, but as the country’s economic troubles have escalated, thrashing the usual suspects no longer gets much of a rise out of crisis-inured Venezuelans. Colombian police help Colombian citizens carry their belongings as they cross the Táchira border river from Brisas de Barinitas, Táchira state, Venezuela to Colombia on Aug. 25, 2015. Colombia complained Monday that Venezuela's mass deportation of its citizens during a crackdown on smuggling has created a "humanitarian tragedy" on part of their border. George Castellanos/AFP

A Pew survey last year showed that 62 percent of Venezuelans looked favorably on the United States; by last month, Maduro’s approval rate had fallen to a record low of 25 percent.

A poll published Thursday showed that three of four Venezuelans rejected the state of exception in the troubled border region, and nearly 77 percent said they believed the crackdown on Colombians was a smoke screen for the country’s deepening woes.

“This is the reaction of a desperate regime, which has mastered the art of shooting itself in the foot,” Diego Arria, Venezuela’s former ambassador to the United Nations, told me.

By the government’s own admission, some 16 percent of Venezuelans are of Colombian descent. Colombia is one of Venezuela’s biggest suppliers of many foods and supplies, and despite the dysfunctional economy, 60 percent of bilateral trade flows over the border in Tachira.

By expelling Colombians, Maduro also is trampling tradition. “Venezuela has been one of the most welcoming countries to foreigners in history,” said Javier Corrales, a political scientist at Amherst College. “To see these border tensions explode now is hugely distressing.”

But in the Bolivarian Republic, political engineering trumps economic logic, never mind legacy. With the ruling United Socialist Party slipping badly in the polls ahead of the Dec. 6 parliamentary elections, the keepers of Chavismo are lunging at opportunities.

More than a home to Colombian immigrants, Tachira is best known as a stronghold for Venezuela’s strident opposition, such as outspoken former mayor of San Cristobal, Daniel Ceballos, who was jailed after last year’s protests and is still under house arrest. The state of exception on the border suspends six basic civil liberties, including the right to assembly, so offering the Maduro government legal gloss for clamping down on some of its most inconvenient rivals.

This is bait and switch, and Maduro has been there before. In May he provoked neighboring Guyana by laying claim to vast stretches of the so-called Essequibo region, where Exxon Mobil had announced a massive oil find, nearly triggering a diplomatic incident.