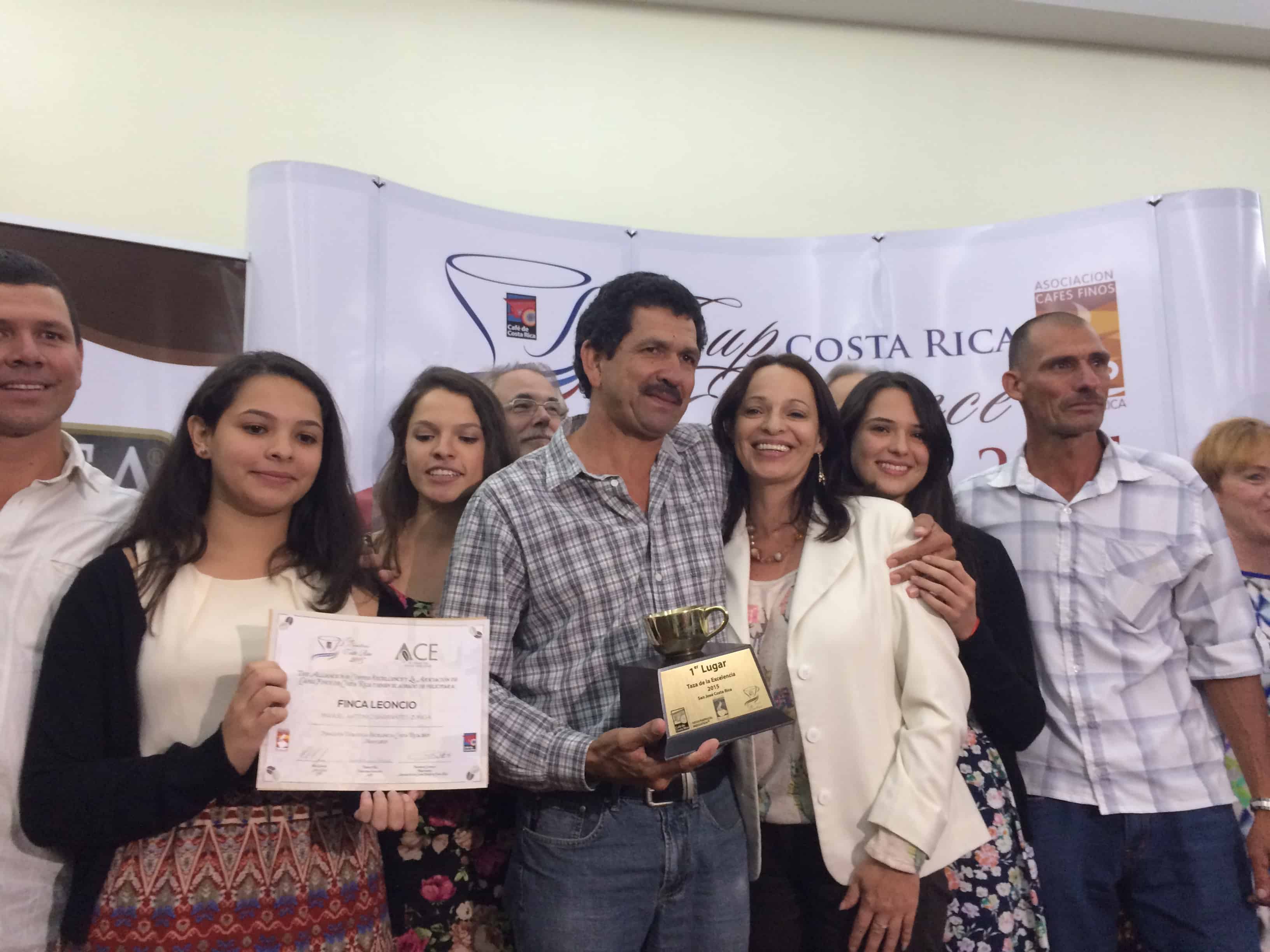 Manuel Antonio Barrantes, the winner of the Cup of Excellence, with his family on May 15, 2015. (Zach Dyer/The Tico Times)

On Friday evening, judges from around the world culled the 60 top coffees in Costa Rica to unveil the 2015 winner of the Cup of Excellence.

This year’s winner is Manuel Antonio Barrantes of Leoncio, Cafetalera Herbazú farm in Costa Rica’s Naranjo region, in the province of Alajuela. Barrantes’ coffee scored 91.46 on a 100 point scale, one of only two entries that received presidential commendation for exceeding 90 points.

The Cup of Excellence was founded in Brazil in 1999 with the goal of encouraging farmers to grow higher quality, specialty coffees. To be sure there was a market for those efforts, the Cup of Excellence organized an auction where buyers from around the world can bid on the best coffees a country has to offer. The competition has been organized for eight years now by the Specialty Coffee Association of Costa Rica.

Barrantes, who has farmed coffee for 14 years, said that growing the coffee that so impressed this week’s judges poses a daily challenge.

“There are no words to describe the feeling,” said Barrantes, in a flannel shirt and jeans before a cheering audience gathered at the Wyndham Herradura Hotel Friday evening.

Paul Songer, head judge for the 2015 Cup of Excellence who also attended the first competition in Brazil, said that Costa Rican coffees have long been recognized for their quality but that farmers are successfully experimenting with different processes, moving the flavors beyond the clean, sweet, acidic palate that defined Costa Rican coffee for so long.

Winning the Cup of Excellence prize has the potential to change a farmer’s business for years to come. The winnings from a successful auction could double a farmer’s income.

“Doubling how much a farmer gets for a crop is like me getting twice my annual salary. It makes a difference,” Songer told The Tico Times.

And the benefits can last far beyond that first year.

“It puts a farmer on the map. It increases their farm’s long-term worth by building relationships with buyers,” he said.

The Cup of Excellence’s top coffees will be up for international auction on June 17.