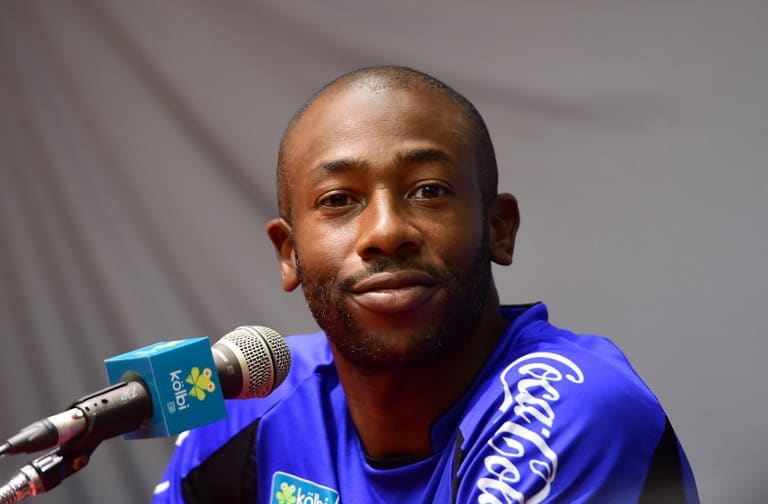 Costa Rica's assistant coach Paulo Wanchope looks on during a press conference after a training session in Santos, on Monday. (AFP)

The ex-Premier League star — and arguably the best player to ever play for Costa Rica — backed the underrated Central Americans to “keep surprising the world” after they floored Uruguay 3-1 to raise hopes of escaping from a tough Group D.

“It’s a big surprise for the world — everyone expected either Uruguay or Italy or England to go through,” Wanchope told reporters after a training session at Santos Stadium.

“For us, it wasn’t a surprise because we know the great talent that we have. We will keep working and keep surprising the world.”

And Wanchope, a hit at Derby Country, West Ham and Manchester City during his extended stint in England, said his side are ready for anything the high-profile Azzurri and Three Lions can throw at them.

“We’re not surprised at anything. We’ve been looking at England for so long,” said Wanchope, when asked what he made of the attack-minded team that went down, 2-1, to Italy.

“For me, especially, I do like the way they play, I do like the talent of [Adam] Lallana, [Dean] Sturridge, [Wayne] Rooney, [Steven] Gerrard. They’re very good going forward and they have good, solid defenders.”

He said he expected England to improve in their second game against Uruguay, potentially setting up a crunch final group match when they face the Costa Ricans next week.

“I think they could do better against Uruguay, I really do think that. But we will concentrate on our game and we will see what we can do against England in the last game,” said Wanchope.

Costa Rica finished the Uruguay game with no yellow cards and no new injuries, meaning they will be at full strength for Friday’s game with Italy.

Goalkeeper Keylor Navas said the team making detailed preparations to face an Italian team that includes the masterful Andrea Pirlo and Mario Balotelli, who scored the winner against England.

“The next game is going to be very important for us,” Navas said. “We’re going to have to do everything right.”

He added that he hoped Italian Gianluigi Buffon, one of his personal goalkeeping heroes, would recover from injury.