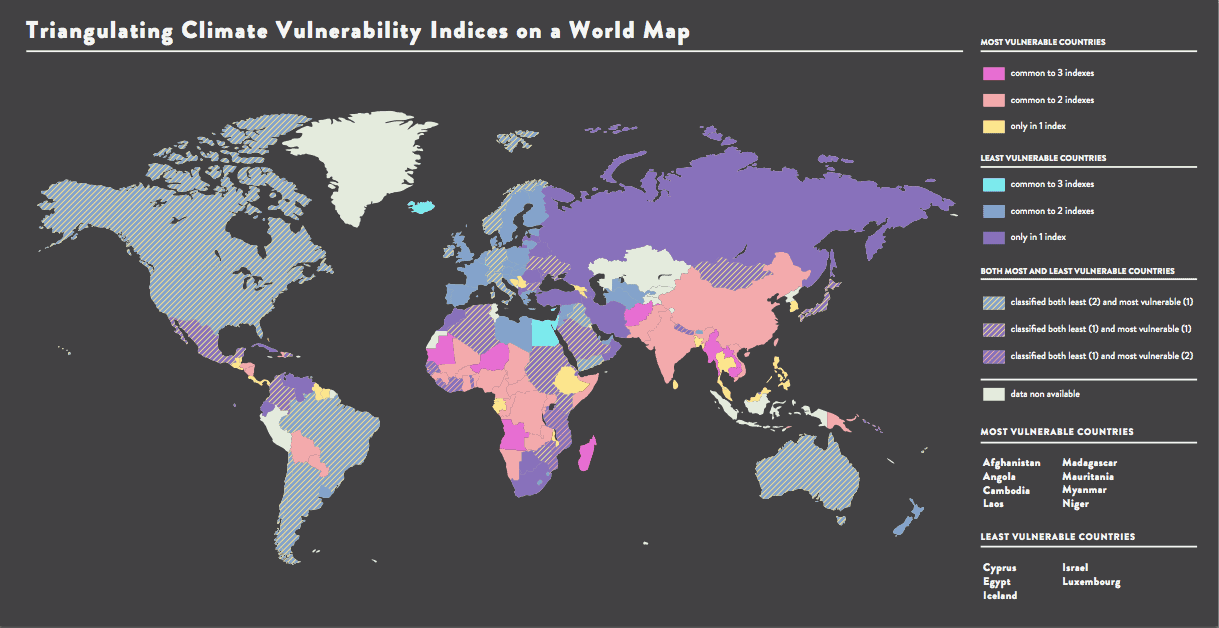 This chart shows the countries most vulnerable to the effects of climate change. ((Courtesy of the Climate Vulnerability Forum))

Amid one of the worst droughts in recent memory, Costa Ricans already are feeling the damage of extreme weather changes that come with climate change, experts said on Wednesday, at the Climate Vulnerability Forum’s regional workshop, held this week in San José.

“Central latitudes are getting drier but experiencing heavy downpours when it does rain,” said Matthew McKinnon, a specialist at the U.N. Development Program, who has been involved with the forum since its start five years ago. “Coastal erosion is causing some islands to disappear entirely.”

These disappearing islands already have been documented in the region’s waters, officials at the National System of Conservation Areas (SINAC) warned, and a larger threat looms for habitats in the region that lie beneath the ocean. Earlier this month, The Tico Times reported that experts expect the Mesoamerican Barrier Reef – which runs from Mexico to Honduras – to collapse by the year 2060.

“Climate change means 50, 60 or 70 hot days will happen each year,” McKinnon said. “We know from the science of ergonomics that when it is hot people work less effectively. By the end of the century these losses could represent significant proportions of GDP.”

Some research shows that once temperatures climb above 26°C (78°F), productivity falls by 2.4 percent with every celsius degree of increase.

Started in 2009 in the Maldives, CVF brings together the countries that have the most to lose if climate change is not addressed. Most of these countries are located in the tropics and near the equator, and they face threats ranging from massive decreases in food production to territorial loss from rising ocean levels. As a region, Central America faces threats to its biodiversity as rising temperatures kill off climate-sensitive species.

As the current president of the forum, Costa Rica is hosting the workshop through Thursday.

“The event is focused on identifying where in the region you can deal with climate change,” McKinnon said. “The biology of the problem is in disregard of borders and this allows countries to share effective methods at combating climate change.”

Home to one of the most drastic reforestation programs in the world, Costa Rica is seen as a regional example for battling climate change. Though the country has failed at crucial reform of its transportation sector, a necessary step to achieve carbon neutrality, Costa Rica has a pioneering system of paying landowners for environmental services on their property.

Since 1996, Costa Rica has used money from gas and water taxes to pay incentives for people to maintain the natural habitats on their property. Landowners can receive government funds for maintaining forest used for carbon mitigation, drinking water collection, preserving biodiversity or natural beauty for tourism or scientific study.

“This system is almost unique in the world and is really helping in restraining deforestation,” McKinnon said. “A lot of people would love to see this system implemented elsewhere.”