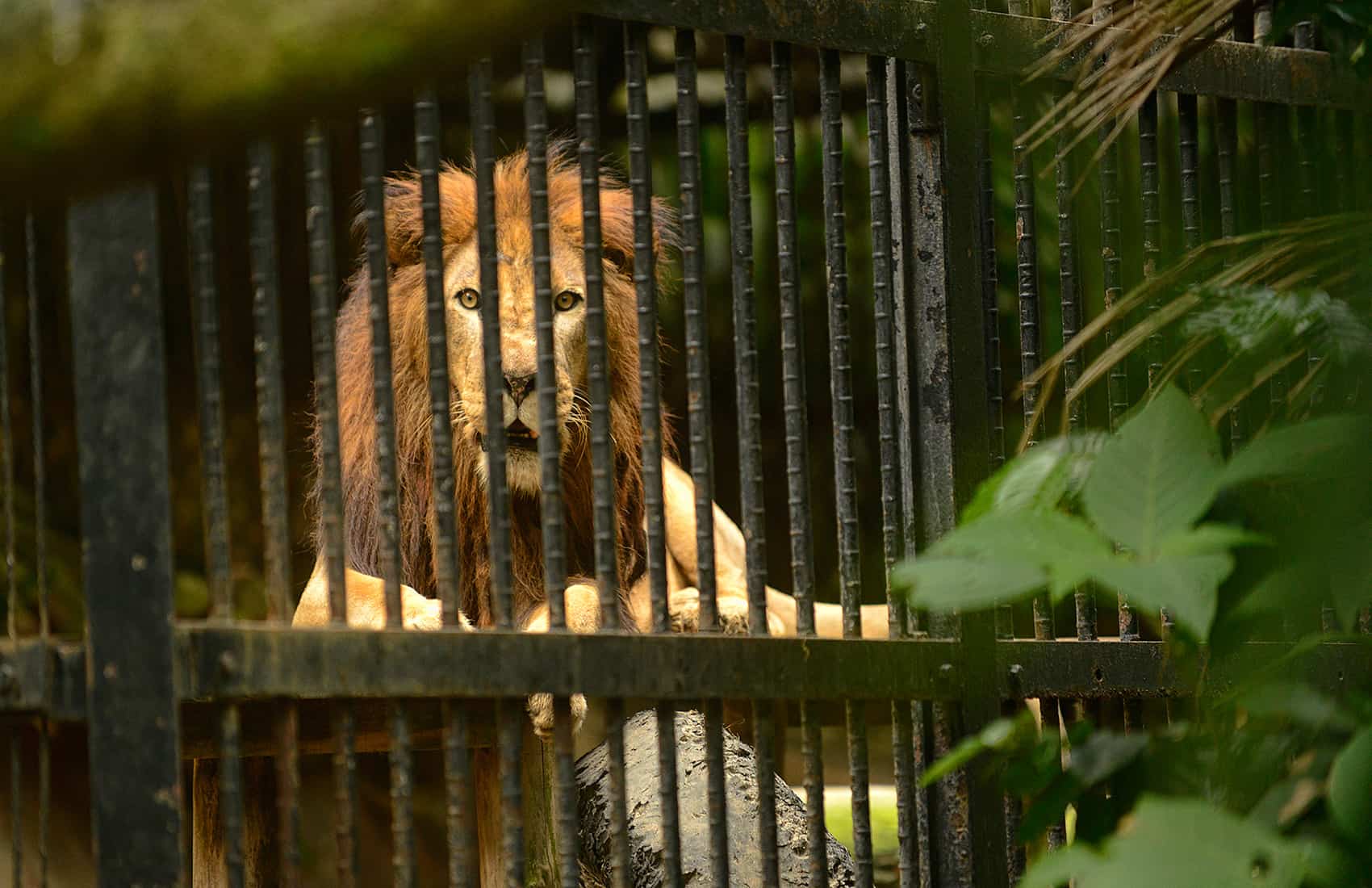 Kivu the lion was born in captivity. He lives at the Simón Bolívar Zoo in San José. (Lindsay Fendt/The Tico Times)

A visit to Simón Bolívar Zoo in San José’s Barrio Amón neighborhood is the closest many visitors will ever come to a lion. Born in captivity in Cuba, Kivu the African lion has been at the zoo for 14 years and his cage sits about 2 meters away from the zoo’s walking path, a short enough distance for guests to stare into the lion’s eyes, hear his roar and, in some cases, taunt the sleeping animal in the hope that it will move around.

“The zoo looks like something out of the 1970s,” said Luís Diego Marín, coordinator of environmental advocacy group Preserve Planet. “The animals have so much contact with humans, they are in a constant state of stress. They don’t have their own separate habitats like they do at modern zoos.”

For years conditions at the public zoo have been a point of contention among environmental groups, many of which argue that even with the best conditions, the idea of Costa Rica having a zoo at all harms its environmental image. A howler monkey in its cage at the Simón Bolívar Zoo.

On Monday, Costa Rica’s Environment Ministry (MINAE) joined this contingent of detractors and declared that, starting in May 2014, Costa Rica will send approximately 400 animals from two Central Valley zoos to rescue centers. The second zoo to be closed is the Conservation Center of Santa Ana, southwest of the capital. The government-funded zoos will reopen as a public park and botanical garden. FUNDAZOO, the nonprofit organization that currently manages the two zoos, is fighting back in court, claiming that a clause in its contract automatically renews it for another 10 years.

MINAE acknowledged the contention in a press release on Wednesday, but said that its plan to transform the zoos into cage-less nature parks is final and irreversible.

“Even in the hypothetical case that FUNDAZOO wins in court and does not turn the zoo back over to the state, which is unlikely, the truth is that they will not be able to have animals in cages or replace any of their current animals that die or are returned to the wild with new ones,” Environment Minister René Castro said.

This most recent battle in the judiciary branch is not the first time FUNDAZOO has appeared in court. In 2006, Marín filed a lawsuit against the zoo following a leptospirosis outbreak that left a zoo employee in the hospital for several months. The case ended with a ruling from the Constitutional Chamber of the Supreme Court that ordered the zoo to improve its sanitation.

MINAE also tried tried to terminate its contract with FUNDAZOO in 2003, but was ordered to renew by an arbitration court on a technicality. FUNDAZOO spokesman Eduardo Bolaños hopes this case will have a similar outcome.

“It seems to me that what happened before is exactly what is happening now,” Bolaños told The Tico Times. “We don’t know the ministry’s intentions, but I would guess that they are responding to the complaints from different groups, mostly environmentalists, who believe that you should free all of the animals regardless of any scientific reason not to.”

Although Kivu the lion was born in captivity, the two zoos’ other animals were found injured or otherwise incapable of living in the wild. And though MINAE says officials will relocate the animals throughout the country’s rescue centers, for Bolaños it doesn’t seem any different.

“You could say that the zoo here is a rescue center,” he said. “We find it very strange that MINAE would want to move an animal kept under internationally sanctioned conditions to another location not beneath their authority.” According to Environment Vice Minister Ana Lorena Guevara, the zoos’ impending closures mark a change in the administration’s attitude toward caged animals in general.

“We want to promote wildlife in the wild, not in any other form,” Guevara told The Tico Times. “We cannot continue showing off animals in cages, instead we can see them on reserves where they are more in touch with their natural surroundings.”

Guevara declined to comment on whether or not the zoos’ conditions played a role in the decision.

Environmental groups opposed to the zoos have declared their support for MINAE’s plan over social media.

“Today we received great news,” the group Resistance Front for Animals and the Land (FRAT) posted on its Facebook page on Monday. “The Simón Bolívar penitentiary center is going to become a botanical garden.”

In a subsequent post, FRAT also announced its intention to protest at the Simón Bolivar Zoo’s 97th Anniversary celebration on Sunday in an effort to condemn FUNDAZOO’s actions in court.