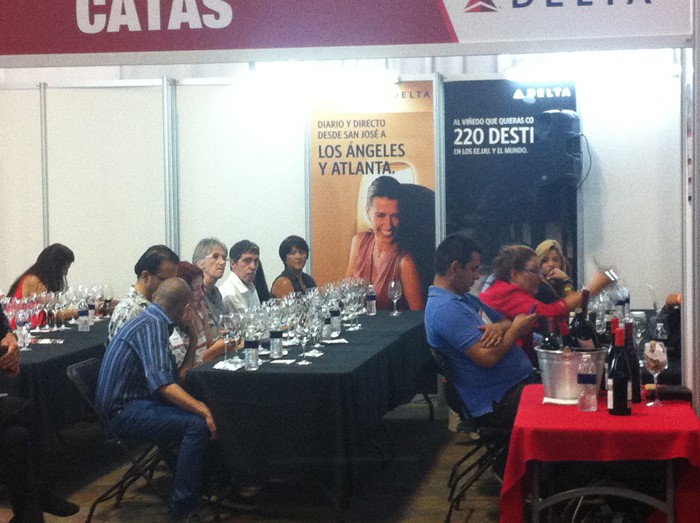 If wine is “liquid art,” as one presenter said Wednesday at the opening of ExpoVino in Belén, then art lovers will find a full gallery of reds and whites to enjoy at the wine convention in the next two days.

For $65 you can indulge your inner oenophile and taste wines from Chile, Argentina, the United States, Spain, Italy and even newcomer Germany from 3 to 9 p.m. Thursday and Friday at the Centro de Eventos Pedregal, just west of San José.

“Ticos love Chilean wine, but they also like to discover new flavors,” said Karl Hempel, director of ExpoVino. “We want to emphasize that the experience here is to discover flavors, discover new wines and above all discover good value in wines.”

Costa Rica has increased wine imports by $7.9 million over the past four years, reaching $23.5 million in 2014, according to the Chamber of Importers (CRECEX).

But wine consumption has a long way to go in Costa Rica, which consumes a paltry 2.75 liters of wine per capita per year, Hempel said.

According to figures from the Wine Institute, the world leader in per-capita wine consumption (bless me, Father) is the Vatican, at 62 liters per capita in 2011. France weighs in at 45.6 liters, the United Kingdom at 20.3 and the United States at 10.5.

Alejandra Monge, communications and marketing coordinator for ExpoVino, said 27 wine importers are represented at the convention, or one-third of all exporters to Costa Rica. But there are a total of 54 stands, including local food and tourism operators.

“This is done every two years,” Monge said. “It’s a window where our principal objective is for the end consumer to get to know all the different distributors there are and to get a real education into wine culture.”

Among the newest offerings are German wines by Georg Müller of Hattenheim, along the Rhine River. Peter Winter, owner of the winery, said exports to Costa Rica began just two months ago, but the wines should be in Auto Mercado stores soon.

“Germany is the 10th biggest producer of wine in the world,” he said. “And OK, we make only 3 percent of the world’s production, but anyway we have lots of wineries, 100,000 hectares of wine.”

He said riesling is the most famous grape in Germany, accounting for about 22 percent of all production, but it’s not the only game in town.

“This is not known to many people,” he said, “but Germany is the third largest pinot noir producer in the world after France, after the United States.”

Most of the German winery’s exports go to countries that are small consumers per capita but have huge populations, mainly China.

“What people don’t know is China has become the biggest red wine consumer in the world,” Winter said. “There is more red wine consumed in China than in France or Italy.”

The $65 admission to ExpoVino includes a wine glass, a 2-ounce taste from all the stands, and five tickets you can redeem for a 4-ounce glass of wine or food (plus, for really lazy wine drinkers, something you can hang around your neck to carry your glass).

Those who have a Banco Nacional card and book in advance get a 20 percent discount.