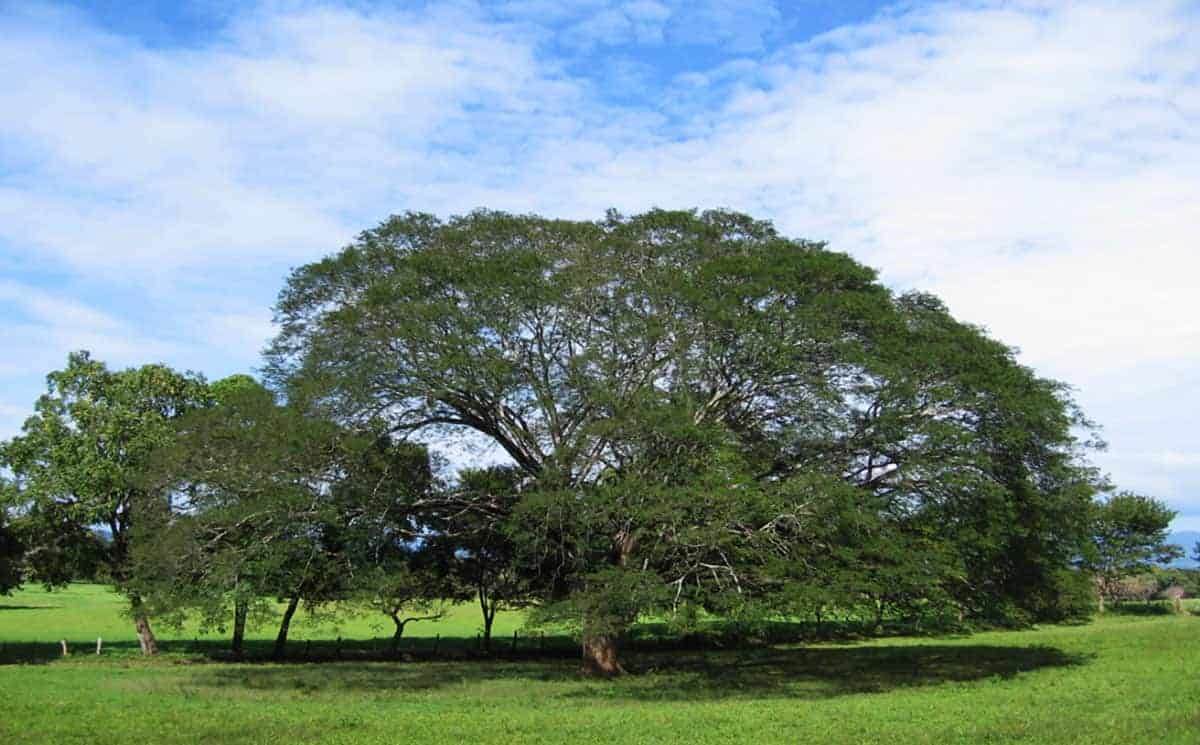 On August 31, 1959, Costa Rica’s national tree was named, it was to become the Guanacaste tree. Standing tall and wide, many of us have probably caught sight of the Guanacaste Tree. Not knowing and asking ourselves, what could be the name of that tree standing so boldly out there? It is distinguishable from all the rest and carries a myriad of characteristics.

Once you have a chance to see the Guanacaste tree’s seed pods you will come to understand how it got its name. The seed pods have a very distinctive shape, glossy and brownish in color. Semi circular it takes on the appearance of an ear, hence its other common name, the Elephant Ear tree. Of Nahuatl origin, Guanacaste is comprised of two words meaning “tree” and “ear”. Other notable names it is referred to as are monkey ear tree, caro caro tree, and of course its scientific name Enterolobium Cyclocarpum.

These unique seed pods find themselves serving a multitude of purposes. Cattle will often consume them passing them through to continue on another generation of national trees. Parrots make themselves known as they feast upon the tree’s fruits.

While they are still green before they dry, they can be boiled up and eaten and are said to be a source of protein. Other ways have been to toast and season them, ground them up to create a type of flour, or roast them to become a substitute for coffee.  Even added to soups or sauces somewhat similar to beans.

Seeds within the pod have a very distinctive design, a natural eye, some referring to it as a deer eye. Natural art is created by making seed bracelets, earrings and necklaces. Just remember, don’t get your jewelry wet. The seeds will swell from absorbing the water and destroy your jewelry.

The tree itself is one of distinctive grandeur growing from 82 feet upwards to 120 feet and more. The trunk itself is just as astounding with diameters reaching 7 feet. The Guanacaste tree is known for its impressive size and is one of the features that contribute to it being so recognizable. Often you may see the crown growing wider than the actual height of the tree itself.

Its massive hemispherical canopy expands as a wide crown. The light green fern-like leaves reach lengths of 15-40 cm and appear feathery. This is one characteristic that makes the Guanacaste Tree so notable and part of the culture. Most often it is recognized for the refuge that this enormous tree provides. The broad canopy shades not only animals but people escaping the heat and sun.

The Bloom cycle runs from February through to April and January to May produces fruit. Less than an inch in the shape of a ball the fragrant white flowers are small.

You will find the national tree growing best in tropical climates with humidity and a dry season. They aren’t found right at the beach as they aren’t tolerant of salty conditions but are located through the coastal area located more inland and even at the river’s banks. They represent resilience with their great tolerance to survive in various humidity and extreme dry climates even through a drought.

The Guanacaste tree can live up to 70 years and with their strong roots, they aren’t grown close to homes. The roots expand and can lead to damage to homes and buildings which is why they are not recommended in residential areas. Especially with its expansive crown, it becomes too large to incorporate within the homes.

Dropping many seeds, leaves, twigs, and broken branches from the winds would require a fair bit of cleanup.  You may find one in a park of open space for an escape and rest in the shade. The national tree isn’t found within dense lush forests but most often than not the wide-open fields and pastures. Coffee plantations will also take advantage of the Guanacaste tree’s enormous shade potential and use them for their coffee plants.

The seed and the tree itself grow quite quickly in a short period.  However, you do need permission granted to cut one down. The wood of the Guanacaste tree is resistant to fungus and water. Most importantly insect resistant especially to termites making it highly desirable for woodworking. It creates beautiful furniture with its distinctive grain patterns and striking appearance.

Tables become a piece of art seeing the beauty of swirling colors of browns, reddish hues, and dark streaks on display. The hardwood is used for windows, doors, cabinets, and posts because of its durability and even canoes and Costa Rica’s famous oxcarts.

But it doesn’t end there, the national tree finds its way into folk medicine uses. The sap itself has been used as an alternative to treating lung infections such as bronchitis. The chemical compounds within the bark and pods can be used to create a substitute for soap. Gastrointestinal issues can help be alleviated through the green fruit.

The Guanacaste tree is much more than a beautiful tree just sitting out there pretty in Costa Rica’s landscapes. It represents and symbolizes much more. It is all-encompassing playing a role in many aspects of people’s lives. It is a friend to shelter you and protect you on a hot day, offers healing or a bit of sustenance, and a canvas for those with a skilled hand.