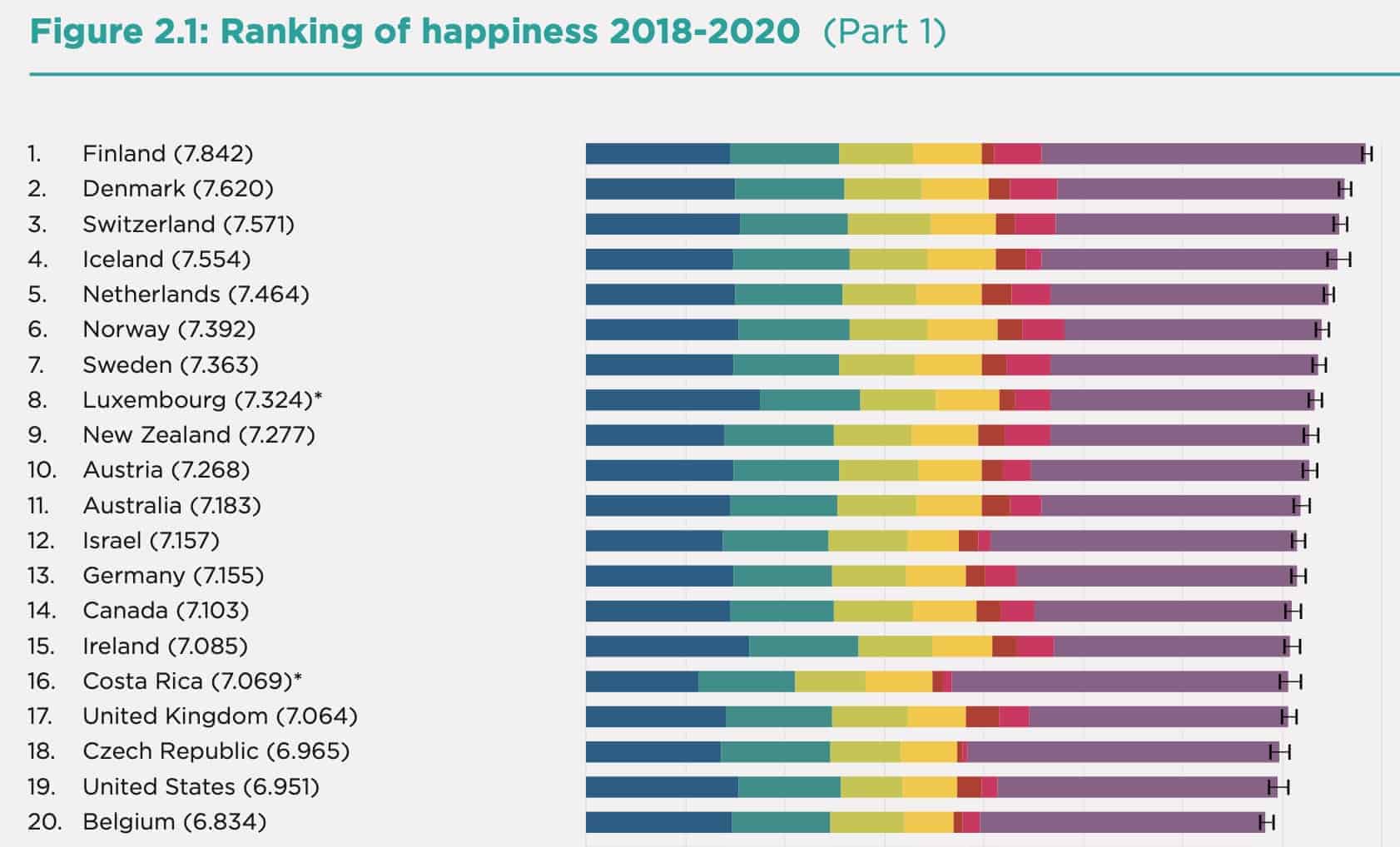 The top-20 countries on the 2021 World Happiness Report. (Screenshot.)

Finland was chosen Friday for the fourth consecutive year as the “happiest country in the world,” ahead of Denmark, Switzerland and Iceland, in a world ranking of well-being that has been affected in different ways by the pandemic.

The 149th country — that is, the most unhappy according to this list — is Afghanistan, a nation subjected to decades of wars and conflicts, accompanied near the bottom by several African countries.

The authors of the study, sponsored by the United Nations and published since 2012, use polls by Gallup that question interviewees about their perception of happiness and cross these data with GDP figures, data on individual freedom, corruption and others, to arrive at a result.

Comparing this list with others before the pandemic, the study authors found that there has been a significantly higher frequency of negative emotions in a third of countries.

But in 22 countries, there is no perceived decline in well-being or in people’s perception of their own lives, sums up John Helliwell, one of the study’s authors, surprised.

““One possible explanation is that people see COVID-19 as a common, outside threat affecting everybody and that this has generated a greater sense of solidarity and fellow-feeling,” the expert said.

Despite long winters and a reputation for being unrepresentative and lonely, Finland has a high standard of living, well-functioning public services, many forests and lakes, and has very positive levels of solidarity and fighting against poverty and inequality.

Finland achieves a score of 7.84 out of 10, and for the first time the Netherlands has entered the top five.

Finland is also one of the developed countries with the best balance against Covid, as the country has reached high levels in “mutual trust” measures that have helped protect lives, according to the study.

For a decade, the European Nordic countries have consistently ranked at the top of this ranking: before Finland, Norway was the happiness leader in 2017 and Denmark held first place for a long time.

Among the great powers, India ranks lowest at 139th.

In Africa, the highest-ranked country is Republic of the Congo, ranked 83rd. From Asia, the first to appear is Taiwan (24th).