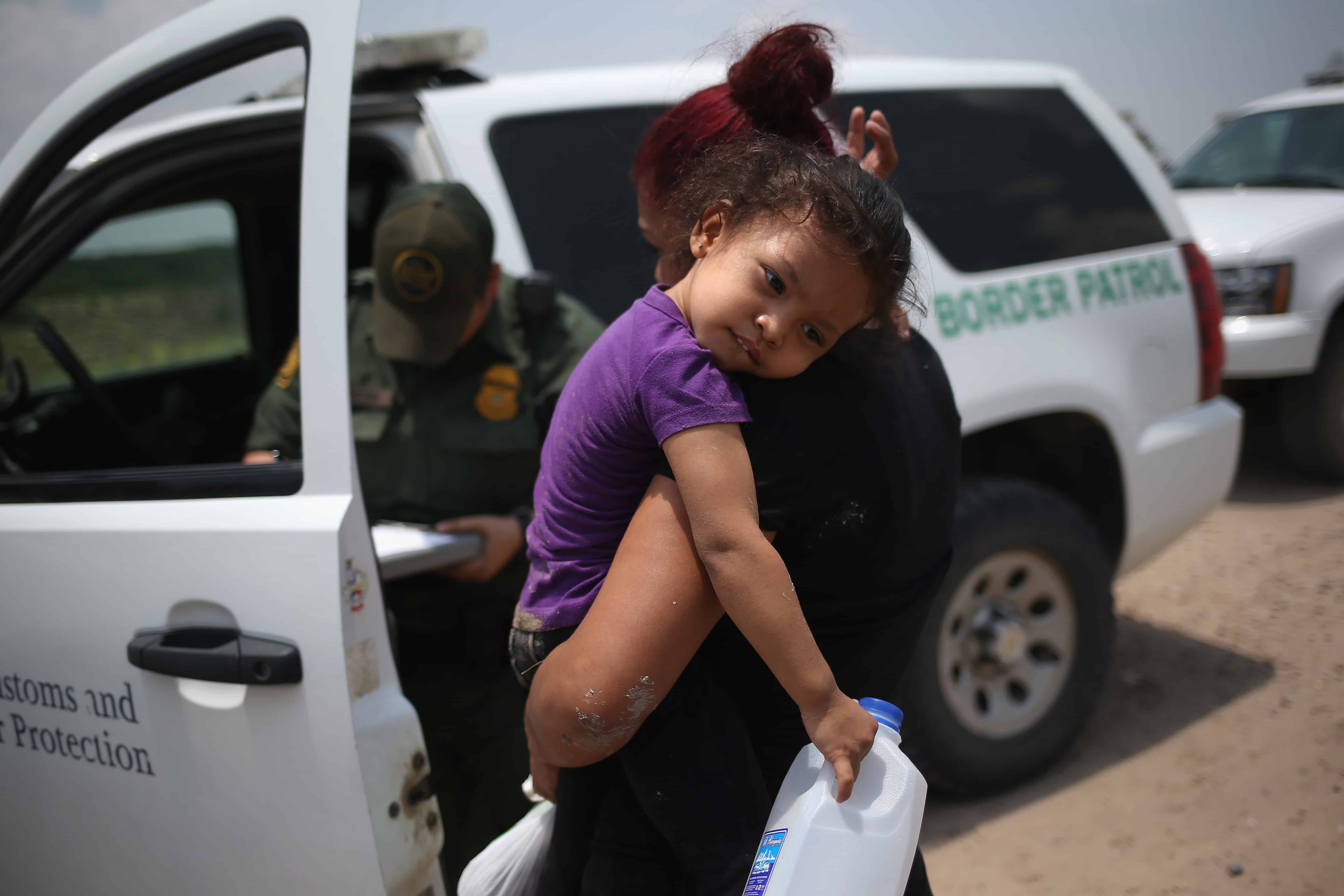 A mother and 3-year-old child from El Salvador await transport to a processing center for undocumented immigrants after they crossed the Río Grande into the United States on July 24, 2014 in Mission, Texas. (John Moore/Getty Images/AFP)

WASHINGTON — Three Latin America-focused think tanks have teamed up to publish the first seven of a planned 15 policy briefs analyzing various aspects of Central American and Mexican migration at its points of departure, transit and settlement in both Mexico and the United States.

Georgetown’s Susan Martin said the project began in 1995 as a binational study of U.S.-Mexican migration and involved a team of 20 researchers, 10 from each country.

“We analyzed the data coming out of both countries, at a time when U.S.-Mexico relations were much better than they had ever been,” said Martin, who coordinated the American side. “We realized that both the U.S. and Mexico were getting substantial migration from Central America. Little did we know back then that there’d be such a large increase in movement from Central America — and that it would soon get more media attention than at any time since the end of the Central American civil wars.”

Halfway into the two-year effort, CANAMID now has its own bilingual website and is entirely funded by the Chicago-based MacArthur Foundation. The project focuses on five key areas: population, education and childhood, healthcare, labor and security.

She noted “a persistent growth in the NTCA-born population in the United States, despite the U.S. economic crisis, rising deportations, the growing number of NTCA nationals apprehended at the border or removed from the U.S. interior, and the increasing risks and costs of transit through Mexico.”

As a result, over the last 20 years the flow of migration from Mexico has fallen while arrivals from El Salvador, Guatemala and Honduras have risen sharply.

“During the 1980s and 1990s, the civil war in El Salvador dislocated peasants to Honduras, which received a large flow of immigrants from neighboring countries,” she said. “Many Guatemalans had to seek refuge in Mexico, where the U.N. had established refugee camps. After peace, emigration was rekindled due to Hurricane Mitch in 1998, the 2001 earthquake and increased gang violence since the beginning of the 21st century.”

Pederzini noted a 50 percent increase in the NTCA population residing in Mexico from 2000 to 2010. Interestingly, in 2000, some 70 percent of these people were Guatemalan-born, though by the end of the decade, the relative presence of Hondurans and Salvadorans had increased — reflecting a dramatic jump in drug- and gang-related violence in those two countries.

Nearly 21,000 unaccompanied minors were apprehended on the southwestern border of the United States in 2013; last year there were 51,000 minors apprehended.

Pia Orrenius, a senior economist with the Federal Reserve Bank of Dallas, said that from a historical perspective, Mexican immigration has virtually dried up.

In presenting a policy brief titled “Central Americans in the U.S. Labor Market: Recent Trends and Policy Impacts,” she noted that Mexicans constitute 28 percent of the nation’s foreign-born population, compared to 8 percent for Central Americans. But since 2000, the Central American population has jumped by 52 percent, nearly double the 27 percent increase recorded for Mexican migrants.

The Immigration Reform and Control Act of 1986 criminalized the hiring of immigrants unauthorized to work in the United States. Ten years later, electronic verification laws came into force, along with expedited removal and the controversial Section 287(g) clause of the Immigration and Nationality Act, which authorizes state and local officials such as police officers to enforce federal immigration laws.

“Seven states now mandate e-verification of work authorization,” said Orrenius. “That was supposed to be a deterrent, but it could affect the demand for labor — and maybe the supply, too.”

Since 2000, her research showed, the ratio of Mexican immigrants who speak English well has risen from 27.1 percent to 32.1 percent, while the ratio of Central American immigrants who are proficient in English has fallen from 31.6 to 29.1 percent. Furthermore, average wages of Mexican laborers in the U.S. have risen since 2000 while average wages of Central Americans here have dropped.

Temporary Protected Status (TPS), which was established as part of the 1990 Immigration Act, now applies to 340,000 immigrants from 11 countries. TPS was first given to citizens of El Salvador and has been extended 10 times since then.

“TPS is helpful, boosting the labor market,” said Orrenius, “but comprehensive immigration reform could bring people in legally, and regularize those already present.”

Educational achievement among Central American immigrants in the U.S. was the focus of a report co-authored by Bryant Jensen of Brigham Young University and James Bachmeier of Temple University.

“Children of Central American origin are much more likely [than immigrants from other regions] to be undocumented and come from a family with at least one unauthorized parent. That has a real effect on their education,” said Jensen.

He said immigrants from El Salvador, Guatemala and Honduras tend to come from the least favorable economic circumstances — even less favorable than immigrants of Mexican origin. As a result, the proportion of Nicaraguan immigrants living below the poverty line is 35 percent, but its nearly 55 percent for Hondurans.

“It matters which country you come from in terms of educational opportunities,” Jensen pointed out. “These two things, national origin and immigration status, interact with each other.”

CANAMID issued four other policy briefs besides the three major ones outlined above. These deal with Central American workers in Mexico; health services for migrants in transit; the link between deportation and mental health, and diplomatic protection for Mexican and Central American migrants.

Official Mexican government surveys that study traffic flows across three border checkpoints with Guatemala show that the vast majority of migrants crossing north are male; 71 percent are under the age of 39; and 88 percent have less than six years of education.

“Mexico is becoming a new destination for Hondurans and Salvadorans, and Salvadorans are better paid than Guatemalans and are more urban and more scattered throughout Mexico,” said Pablo Mateos of CIESAS. “Guatemalans are concentrated in Chiapas, since they have a legal temporary work card for the border area.”

The report recommends that Mexico extend temporary work permits to states other than Chiapas; increase social security coverage for migrants; coordinate educational systems to recognize Central American degrees in Mexico and vice-versa, and extend some of Mexico’s social programs to Central Americans living in the country.

When it comes to deportees returned from the U.S. or Mexico back to Central America, they’re often treated like criminals, even if they’ve done nothing worse then overstay their visas.

“Many of these people have spent years in the United States and don’t even speak Spanish properly,” said Mateos. “Our recommendations are to provide counseling at deportation arrival sites, promote community mental health in localities of return, and social reintegration programs for detainees.”

By the same token, he said, Central American consular authorities should be guaranteed diplomatic immunity as they go about their work, while obstacles that restrict access to information about human rights should be removed.

“There’s been an increase in the violation of migrant rights over the last decade, many of them involving minors. Consular protection of Central Americans should be a state policy,” Mateos urged. “Mexico has the largest number of consulates [in the United States] of any country in the world. By contrast, Central Americans find that their countries cannot protect them as well as the Mexicans protect their own people.”