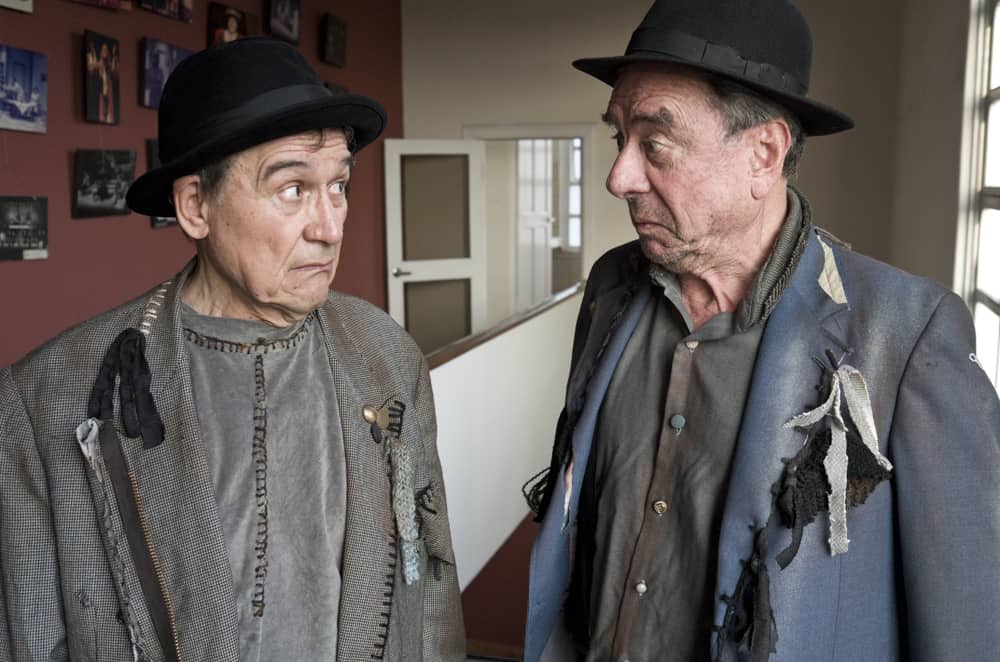 El Grupo Crono could have picked any play, in any language, from any part of the world, but they picked one of the most challenging titles in the canon: “Waiting for Godot” will present its second and final performance at the National Theater on Sunday evening. Samuel Beckett’s existential tragicomedy is an ambitious project, and if you have any interest in challenging theater, this is a must-see.

But before you dive into “Esperando a Godot,” you might need a refresher on what the play actually is. If it’s been a few years since that theater history class you were forced to take in college, here’s some background and trivia about the play and Grupo Crono’s impressive new production.

It’s one of the most respected plays of all time.

It’s hard to say whether Samuel Beckett knew that his play would change theater forever when he started writing “Godot” in 1949, but its impact is immeasurable. Unlike most drama at the time, “Godot” takes place on a nearly empty stage. There’s a creepy-looking tree and almost nothing else. Vladimir and Estragon are dressed like hobos, with their ragged clothing and weather-beaten bowler caps, and almost nothing they say makes any sense. They are waiting for someone named Godot, but they don’t know why or when the mysterious figure will arrive. At one point, a boisterous character named Pozzo shows up with his zombie-like servant Lucky. The play is filled with jokes and pratfalls, like an apocalyptic clown show. Many people call the play an “existential drama,” and it helped myriad playwrights and directors experiment with form, particularly during the 1960s.

This production is in Spanish, but the original was French.

Although Beckett was raised in Ireland, he moved to France and wrote the first script in his adopted language. The play was originally called “En Attendant Godot” and premiered in Paris. Interestingly, “Godot” is always pronounced “Go-DOH” in French and English, but in Spanish it’s “GO-dot.” Here’s the thing: If you speak decent Spanish, the dialogue is remarkably easy to follow – and if you don’t speak Spanish at all, the conversations will make almost as much sense.

Technically, “Waiting for Godot” is considered “absurdist,” which means everything that happens on stage is odd and surreal. But the idea of absurdist drama is that you can look beyond the unrealistic and illogical details and spot grains of truth. We have all been in a position where we waited endlessly for something important, and then it never happened. Pozzo and Lucky show the unsettling relationship between a master and servant, and Vladimir and Estragon aren’t exactly friends, but people who become close because they share a burden. Academics have debated the “meaning” of “Godot” for decades.

As the play opens, Estragon is tugging at his shoe, which seems to be stuck to his weary feet. Later on, Pozzo orders Lucky to dance, but Lucky’s simple choreography fails to impress the two tramps, and they openly make fun of him. The play is riddled with nonsensical exchanges and physical comedy. It’s not “ha-ha” funny, but you’ll probably find yourself chuckling throughout.

These actors are some of the best in the business.

Lucky is played by a woman.

“Waiting for Godot” has been produced all over the world, including in prisons and in the middle of Sarajevo during the siege. While the basic premise is always the same, directors often experiment with casting or performance style. Viviana Porras plays Lucky, which gives the character a slightly different quality than the traditional beleaguered male. (And she’s really good, too.)

In case you think that Samuel Beckett was some kind of self-obsessed artist who wrote only for highbrow stuffed shirts, here’s an anecdote to keep things in perspective: While Beckett was living in France, he met a young boy who was unusually large and struggled to get to school. Beckett took pity on him and often played the boy’s chauffeur. The boy never forgot Beckett’s generosity, even when he became a world-famous professional wrestler and took the stage name André the Giant.

The production is top quality.

El Grupo Crono has put together a startlingly good production of Godot, with precise timing, intense physicality, a strong sound design, and a rich understanding of the play. Fans of “Godot” will likely leave the show satisfied – although there’s always some curmudgeon who will claim that the finer points of existentialism were sacrificed for the sake of sight gags. Well, to quote the play, “Nothing to be done.”

This production has only one severe weakness – there’s no intermission. Two straight hours of nihilistic nonsense can get wearying, and El Grupo Crono demands a lot of patience from its audience. The old joke is that “Godot” is a play in which nothing happens, twice. The second act is like a rehash of the first, so a breather is essential for theatergoers. Still, it’s a rare opportunity to see a masterpiece, and sometimes masterpieces require a little extra wait.