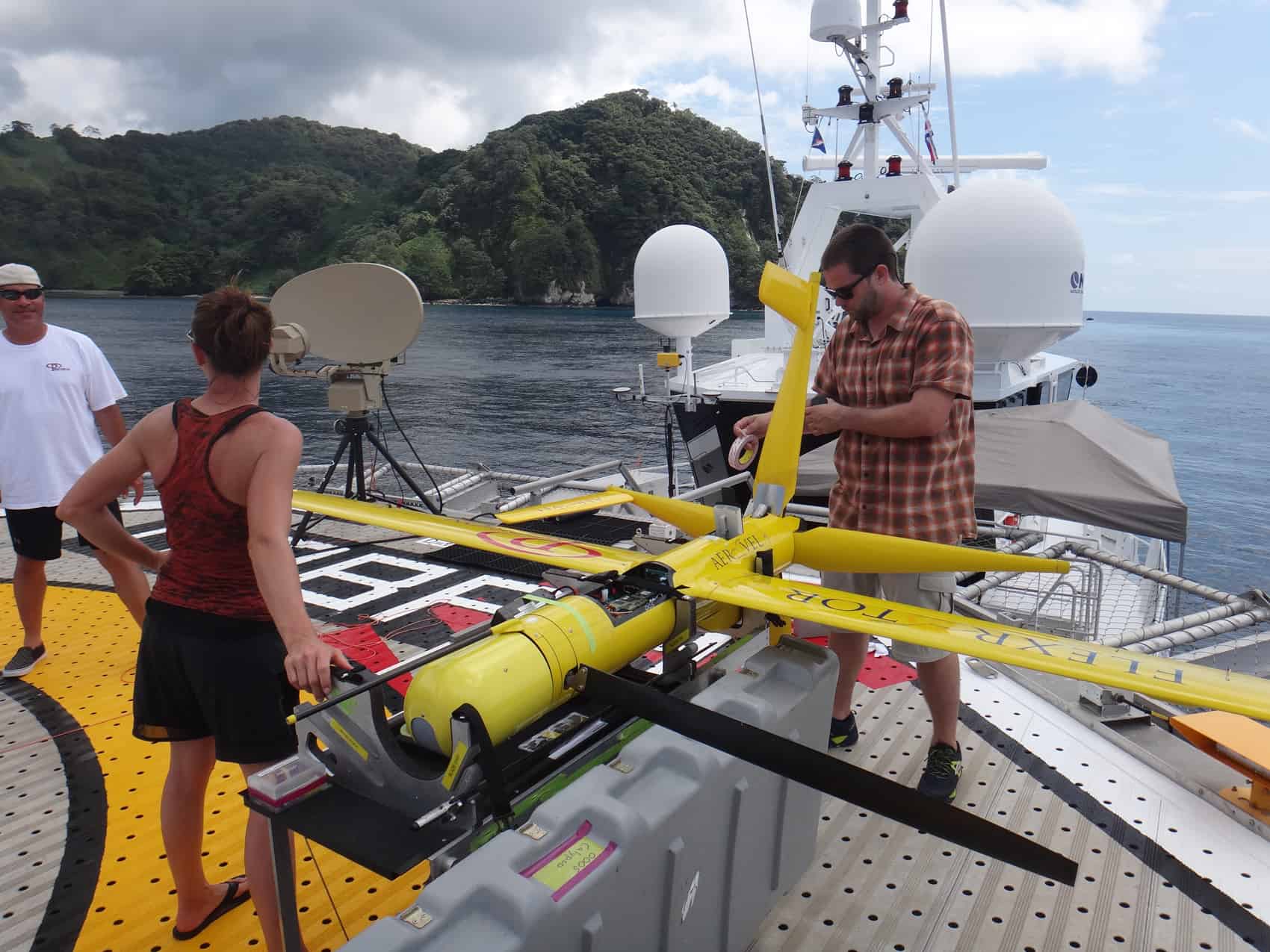 Charissa Moen of Precision Integrated and Andy Crafts of UAV manufacturer Aeroval inspect a Flexrotor drone during a test flight in Cocos Island in May, 2015. ((Courtesy Turtle Island Restoration Network))

Drones are best known for their place on the battlefield but conservationists hope unmanned aerial vehicles, or UAVs, can transition to a different fight: illegal fishing.

In May, the National System of Conservation Areas (SINAC) and Turtle Island Restoration Network, a marine conservation group, traveled to the remote, bio-rich Cocos Island National Park with support from Alucia Productions and the Dalio Ocean Initiative to lay the groundwork for using unmanned aerial vehicles to collect evidence of poaching in the island’s protected waters.

Poaching is a serious problem in Cocos Island. Its remote location 365 miles off the Costa Rican mainland makes it difficult to reach and expensive for Costa Rica’s Coast Guard to patrol. Illegal fishing threatens endangered hammerhead sharks, manta rays, sea turtles and other protected wildlife that live within the UNESCO World Heritage Site.

“The main problem in Cocos is a legal one. The law says you have to catch them (poachers) red-handed, actively fishing,” said conservationist Randall Arauz, director of the Turtle Island Restoration Network.

Arauz said patrol boats are important but they haven’t been effective in terms of securing evidence to prosecute illegal fishermen in the nearly 200,000 hectares of water covered by the national park. Often poachers can spot the patrols and dump their lines before Coast Guard officers arrive.

“It’s almost impossible to get any reasonable prosecution,” Arauz said.

And that’s where drone surveillance comes in.

After seeing a drone from Oregon-based UAV operator Precision Integrated identify an illegal shrimp trawler in Costa Rica’s Caletas Arío National Wildlife Refuge in Nandayure, Guanacaste in 2013, Arauz was hopeful that drone technology could be a game-changer in the fight to protect Costa Rica’s rich biodiversity.

Watch: test footage captured by the Flexrotor drone during the day and night over Cocos Island, Costa Rica on May 14 and 15, 2015. No vessels photographed were breaking the law. Courtesy Randall Arauz.

Precision Integrated returned to Costa Rica in May and donated its expertise and a Flexrotor drone for the test flight. When the propellers of the yellow drone start to whirl into a high-pitched whine, the UAV lifts off the flat surface of a boat deck and then flies horizontally like a typical airplane. Think of it like a mini-Harrier jet (without the jet or the payload).

The Flexrotor is 2 meters long with a wingspan of 3 meters and it can reach altitudes of 1,500 meters. Once in flight it can maintain 20 hours of continuous operation. It uses global positioning satellite navigation and infrared cameras to track wildlife and eventually illegal fishermen.

Similar drones from Precision have been used in South Africa to fight rhino poaching in national parks there, but the vehicles had yet to be tested over the ocean. The test flight was a success, Arauz said.

The next step is to set up a second trial for a month in hopes of collecting video evidence of poaching, in collaboration with the Environment Ministry, to be used in a trial sometime in 2016, Arauz said. If video footage can be used to successfully prosecute illegal fishing, Arauz said conservationists would pursue fundraising to get several drones and training for Costa Ricans to operate them.

Even if the drones don’t end up as part of a law enforcement scheme, Arauz said they could be used in future research expeditions to track whales and other large animals under the waves.

“If we can get two or three of these (illegal) fishermen, we’re positive that that will discourage a lot of illegal fishing,” Arauz said.