Could a shark-finning trial restore loophole in Costa Rica law? 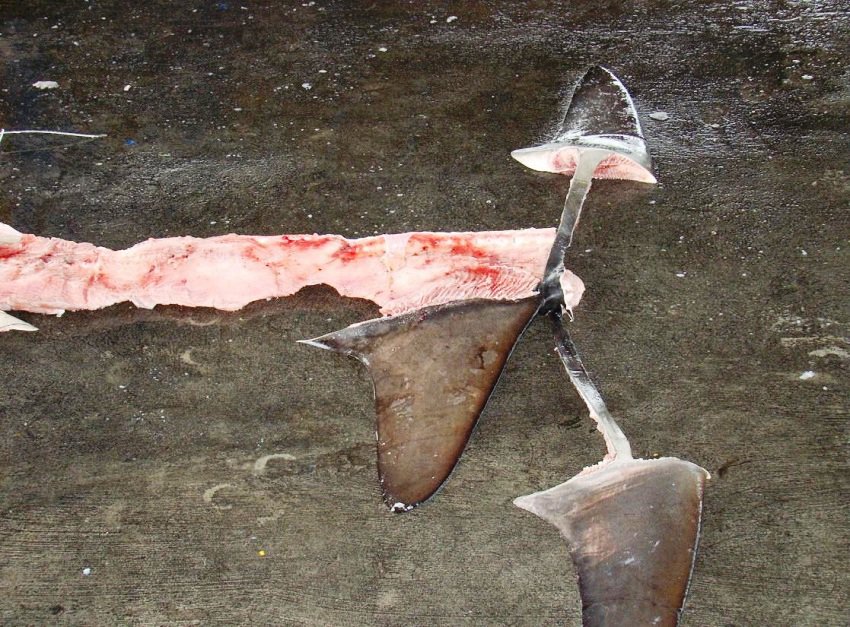 Shark fins at a Puntarenas dock in 2011 attached to the spine by strips of skin. The case is now being prosecuted in court. ((Courtesy of the OIJ))

A Puntarenas court will reconvene Friday for a shark finning trial that could re-establish a gruesome loophole in the law that bans finning in Costa Rican waters.

The case started in 2011, when a boat belonging to the case’s defendant, Taiwanese-Costa Rican Kathy Tseng Chang, docked in Puntarenas, on Costa Rica’s central Pacific coast. Fishermen on Tseng’s boat had allegedly carved out all of the meat, bones and innards of 36 sharks, leaving only the spinal column with the fins attached by strips of skin. Tseng claims that the meat was used for bait and as food for the crew, both legal when fishing sharks.

The practice of shark finning is credited with the decimation of more than 90 percent of the world’s sharks, and it fuels the demand for shark-fin soup, an Asian delicacy that can fetch more than $100 a bowl.  To save room in the hulls and maximize profits, fishermen often slice off the sharks’ fins and toss the bodies overboard. Landing shark fins without a body attached has been illegal at Costa Rican docks for more than a decade.

After word got out about Tseng’s fishing expedition, the president of the Pacific Coast Fishermen’s Union, Javier Catón, filed an official complaint that the fins were not “naturally attached” to the shark’s body per Costa Rican Law. The complaint prompted the Puntarenas Prosecutor’s Office to open an investigation.

Three years later, the case is now seeing light in court and assistant prosecutor Tatiana Chaves says a non-guilty verdict could have broad consequences for shark-finning as a whole.

“If the court does not condemn this practice it is possible that people could interpret that to mean that it is legal to bring in sharks in this manner,” Chaves said. “I do not think that would happen, but it is a possibility.”

In case of a not-guilty verdict, the legality of Tseng’s finning method is left open to interpretation. It would be up to the Costa Rican Fisheries Institute (Incopesca) to decide whether or not to allow future boats to land sharks in the same condition as on Tseng’s boat, Chaves said.

Luis Dobles, executive director of Incopesca, originally authorized Tseng’s ship to unload its cargo, and is under investigation for a related case. Dobles has denied wrongdoing and mantained that Tseng’s actions were legal.

“Using shark meat as bait could be considered an integral part of shark fishing,” Dobles wrote in the resolution that allowed Tseng’s ship to dock. “There are not methods that exist to verify that that is actually what the meat was used for.”

Environmentalists fear that regardless of enforcement, the uncertainty of a not-guilty verdict would bring back many of the boats that had left Costa Rica following the passage of stricter regulations.

“If [Tseng and Dobles] both get away with this then we can start expecting a wave of Taiwanese ships to arrive in Costa Rica that had left,” said Randall Arauz, president of the ocean conservation organization Pretoma. “We will be the jokes of the whole world. That will happen.”

If Tseng is found guilty she will face a fine and up to one year in jail, a penalty Chaves said the defendant would be unlikely to serve due to prison overcrowding. The verdict could come in as early as today.

“People don’t consider it a very important crime here,” said Chaves, “but even if the case does not effect shark finning directly, it is important that we send a message that we will not tolerate this in our waters.”