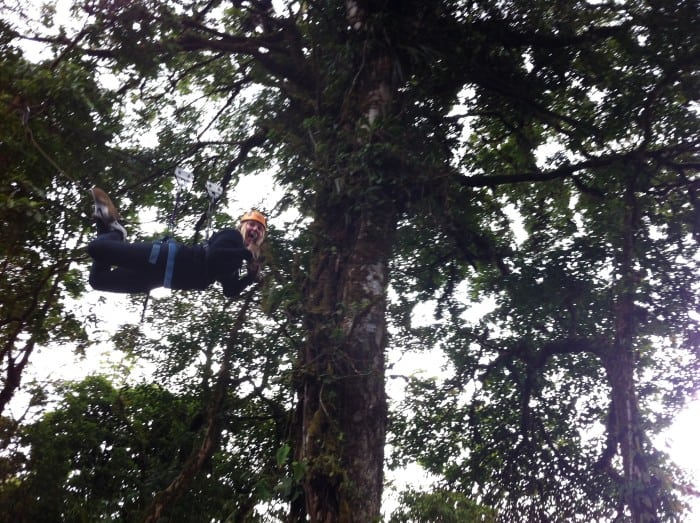 A thrill-seeker takes off on the 1.6-km Superman cable at 100% Aventura in Monteverde. (Karl Kahler/The Tico Times)

MONTEVERDE, Puntarenas — I started filming toward the end of the green steel-mesh bridge, heading to the Tarzan swing, my hands shaking like aspen leaves.

“And here we are walking out onto the giant Tarzan swing,” I said, breathing like I had just run a marathon, though I was doing nothing strenuous. “You can see the people Supermanning through the air. It’s not scary here at all.”

It was freaking terrifying.

The long suspended bridge to the “Mega Tarzan Swing” offered by 100% Aventura rocked wildly from side to side, creating the impression that it was about to flip sideways and I was going to “fly” for real.

At the end, fortunately, there was a gate, because otherwise it would have been too scary to approach the opening.

The guys hooking me up repeated my words back to me, amused to see a tourist trying to hide his terror. Then they started hauling on the rope, pulling me inevitably closer to the gate.

“You just bend your knees, and then feet first,” the guy said. “Step out.”

And plunged. The free fall lasted for three seconds that felt like an eternity. It took my breath away so completely that I couldn’t have screamed if I tried. My friends on the ground told me later I looked eerily calm and happy.

The rope caught and swung me into a huge arc — it felt like I had been shot out of a slingshot and would be flung from Monteverde to Arenal (first-class flight, one way). But what goes up must come down, and of course I did.

The Tarzan swing is an optional finale to 100% Aventura’s $45 canopy tour, easily the most thrilling of the three I’ve tried, thanks to the Tarzan swing and the Superman cable that precedes it.

The company advertises its 1,590-meter zipline — 1.6 km, or 64 feet short of a mile — as the longest in Latin America. It’s called a Superman cable because riders are harnessed face down, flying through the sky like the Man of Steel, so they don’t have to brake or do anything but enjoy the ride. And what an amazing ride it is — crossing a huge, verdant valley at an altitude normally reserved for small aircraft, harnessed by a few straps and ropes to a steel cable, for a minute and 20 seconds. It was spectacular and thrilling, the flight of a lifetime.

It was also at times a bit terrifying, like when I moved my head around to look left, right or behind me, as if breaking out of my frozen position would make something go wrong and send me plunging to the earth.

The canopy tour also offered standard ziplines, of course, and some of them were arguably scarier than the long Superman because you have to use the hand on the cable behind you to keep from helicoptering around in circles, and you have to throw on the brakes at the end.

On one platform between ziplines, I saw a young woman who appeared to be holding back tears of terror. Others screamed in fright on the vertical rappel, which is controlled by a belayer and felt short and tame to me.

What scared me the most? Call me strange, but it was walking across a suspended bridge with spaced-out planks for a floor, and plenty of air between them to see how high above the ground I was. Tall bridges with see-through floors scare the hell out of me. At one point I had a vision that I would panic and drop to my knees and have to crawl the rest of the way. But humiliation is a fate worse than terror, so I kept putting one foot in front of the other, walking like a double amputee trying out artificial legs for the first time.

Crystal Romine, 24, and Kyle Leahy, 27, of Kelowna, B.C., both described the Superman cable as “breathtaking.” “When I did it, the clouds were coming through, and it can get so windy up there, my eyes were watering,” Romine said.

“I actually stopped on the longest one,” Leahy said, “quite a ways before where you get off, and they had to come out and get me. The guy said, ‘Your pulley’s broke.’ … He just said the bearing’s getting worn out. And I was like, ‘Oh, good to know, you might want to change that out.’”

As for the Tarzan swing, Leahy called it “an awesome experience” and a “good rush.”

When the gate opened and the guys pulled him forward with the rope, he said, “There’s so much pressure, and I was pulling back, and they said, ‘No, amigo, no, you’re going.’”

Camilla Leitner, a 31-year-old account manager for Booking.com from Austria, said of the Tarzan swing: “Well, it’s good they don’t give you much time to think about it, no? … I guess a lot of people would just chicken out.”

Had she ever gone ziplining before?

“Nope, that was the first time, and it’s going to be the last time as well.”

Getting there: Transportation is included to and from all hotels in the Monteverde area.
Cost: $45 for adults, $35 for children.
Website: http://www.aventuracanopytour.com
Email: info@monteverdeadventure.com
Phone: (506) 2645-6388