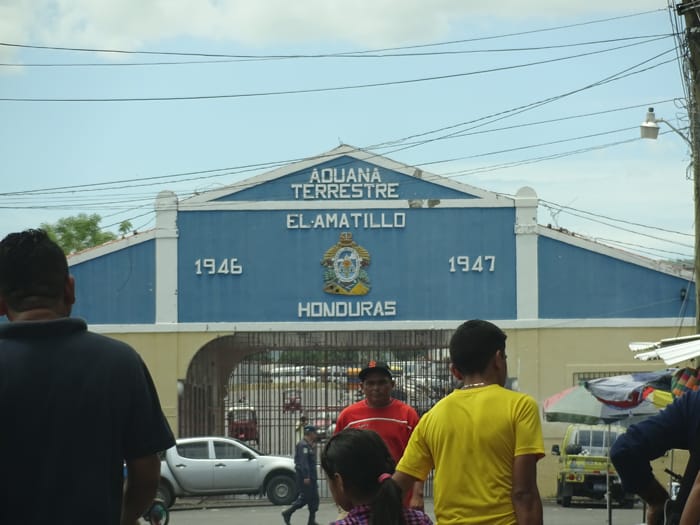 Welcome to Honduras — now get out your money. (Karl Kahler/The Tico Times)

GRANADA, Nicaragua — We were three-quarters of the way through El Salvador on the Inter-American Highway Tuesday when we saw the naked woman on the shoulder.

She was middle-aged, brown-skinned, buxom, a bit fleshy and hadn’t had a Brazilian in a while. She was naked as a jaybird but apparently in no distress, gesturing casually to a (dressed) male companion.

Paul and I burst out laughing. There’s something you don’t see every day. Or ever. Our only guess was that she had been bathing in a river and thought nothing of strolling up to the highway while she air-dried. Or maybe she was just in the mood to go in the nude, and didn’t mind getting graphic in front of traffic.

On the sixth day of a brotherly road trip from Arkansas to Costa Rica in the car our dearly departed mother left us, we got an 8 a.m. start from San Salvador and reached the El Amatillo border crossing at 10:45. We were in for the low point of our trip.

When we crossed into El Salvador on Monday, our excellent border fixer recommended we use the services of his friend on the other side. We agreed, so he called the guy, who agreed to meet us at a gas station near the border. As we approached the border, a man ran up to our car gesturing wildly. Paul veered past him, figuring he was just the first of the locusts that were about to descend on us.

Paul and I cracked up and pulled over. Suddenly four men thronged our car — apparently our fixer had three helpers — and told us to follow their black truck. They actually sprinted back to their truck in their excitement. We went through the same drill as before — get copies, change money, get passport stamped, follow the fixers. Then on a bridge leaving El Salvador, a border guard in a blue uniform waved us over, checked our papers and looked in our trunk.

The fixer tried to argue that it was a mistake made at the other border, and the guard reread the paper and said, “I can read.”

He also said he wasn’t in any hurry, he would be here all day. The cop said he was going to send us all the way back to the end of the line and have our car thoroughly searched. In other words, he wanted some chorizo.

He told us to open the boxes in the trunk. I pulled out the biggest one and he cut the tape with his pen. It contained towels and kitchen spices.

I explained that our mother had died in Arkansas, and the boxes contained both useful items and objects of sentimental value we had salvaged from her belongings. As he rummaged around, he touched a white garbage bag containing a black plastic urn.

“Those are her ashes,” I said.

“Where?” he asked, looking spooked.

“Thanks for telling me, because that I don’t want to touch,” he said, raising his hands. Ah, so he was human. But he still wanted his bribe. Our fixer said he would fix it, and he talked to the cop privately. Then he told us he would pay the cop and we could pay him.

I figured these guys did this every day. The fixer probably gave the cop 10 and told the tourists it was 20.

The cop waved us on. We had a great impression of El Salvador until this border guard soured it for us. I hope he catches a vile disease that makes him crap his pants explosively every day with no warning, preferably right when he’s trying to extort money from innocent people. Paul argued vociferously that they were just gouging us for charges they couldn’t document, without showing us any paperwork as confirmation.

They argued back that the charges were legitimate, one of them holding the car permit that we needed. “So what do you want to do?” he asked.

They call themselves tramitadores — people who help with trámites, or bureaucratic tasks. We called them the Tramitators. And like the killer cyborgs from the future, they never give up.

They weren’t in the business of backing down, and if we wanted to stand here in the hot sun arguing all day, they had time. It was the same game the border guard had played — when tourists with money are given a choice between handing it over and being delayed all day, they’ll pay. We zoomed across Honduras in three hours, including the time we stopped to eat a sumptuous lunch. And then it was time for another border crossing.

A man rushed up to our car. “Paúl!” he said. Word travels fast at border crossings in this country about loaded gringos.

Exiting Honduras and entering Nicaragua was relatively painless and cheap. Nobody shook us down for a bribe (exactly), though we were told by the fixer in advance that the search of the car would go much more quickly if we agreed to pay $10 to expedite the process. Whatever!

We were in and out in about an hour, and suddenly it looked possible to make our day’s goal — Granada — for the first time on this trip.

Things were looking good when we hit Estelí, so we put the hammer down. And then, just as dark fell, a downpour. A long downpour. An aguacero that lasted hours, and in fact is still going on at this writing. We spent three hours driving in heavy rain in heavy traffic, and it was not fun and is not recommended.

But we made Granada at about 9 p.m., and managed to find our way to the Hotel Real La Merced, which is simply awesome.

Biggest head-scratcher: What was up with that naked lady?