Tapantí: Tarantulas, tapirs and the end of the road in Costa Rica 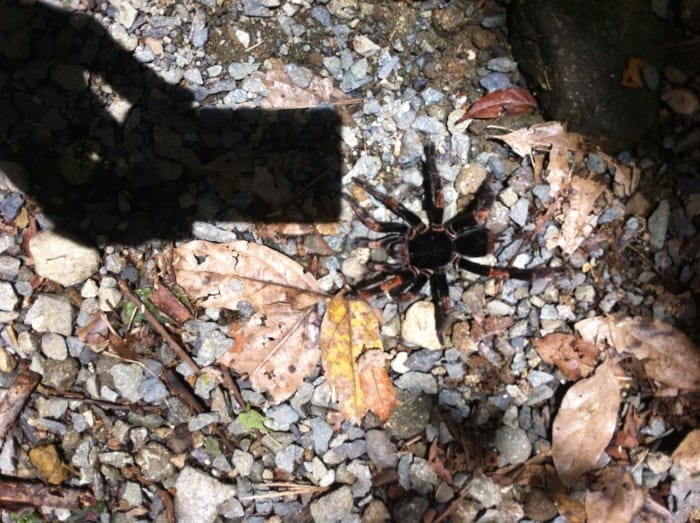 TAPANTÍ NATIONAL PARK, Cartago — I actually let out a yelp when I saw the big tarantula marching toward me on the sunny little trail.

Then I laughed at myself, pulled out my phone and started taking pictures.

“I notice you’re coming right toward me,” I said to the incoming, “so I’m guessing I should get out of your way, not the other way around?”

Other than this spectacular orange-kneed tarantula, I had the trails pretty much to myself Friday in this wild and beautiful park an hour and a half from San José. It’s little known internationally, but it’s a go-to destination for a great many Ticos from the Central Valley.

“Most of our visitors are families, and they’re 80 percent nationals and 20 percent foreigners,” said Meryll Arias Quirós, administrator of the Tapantí/Macizo de la Muerte National Park near Orosi, southeast of Cartago. “We’d like those numbers to be more equal, like 50-50.”

This is the second-largest terrestrial national park in Costa Rica, at 58,495 hectares, Arias said. And it’s part of the World Heritage Site that follows the Talamanca Range into Panama. Some 150 rivers originate in these mountains.

“This park is responsible for half the potable water that is consumed in the greater metropolitan area,” she said. “Another way of saying that is that 30 percent of all Ticos drink water from Tapantí.”

The park is one of the wettest in Costa Rica, receiving an astonishing 7 meters of rain a year.

It’s home to approximately 350 species of birds, Arias said, and some 80 species of mammals, most of them bats and rodents.

Most of the mammals in the park are timid and many are nocturnal, she said, so it’s hard to spot them on the trails during the day.

“The six species of felines in Costa Rica all live in Tapantí,” she said. “There are (also) tapirs, brocket deer, howler monkeys, white-faced monkeys. There’s a lot of biodiversity, in plants as well as animals.”

The name of the park, Tapantí, is said to be an indigenous word for tapir, but Arias said that’s disputed. Alternatively, it’s also thought to be the Cabecar word for “torrent that comes from the sky.” Another explanation is that it sounds like the indigenous word for Río Danta, Tapir River.

“Macizo de la Muerte,” or “Massif of Death,” refers to the cluster of mountains around Cerro de la Muerte, so named because of people who have died of exposure trying to cross it.

The ranger who relieved me of $10 at the entrance, Juan Calvo, gave me a brochure map of the hiking trails and suggested I drive to the end of the road first and start with the mirador. From this lookout, 100 meters up some mossy steps, you can see El Salto Waterfall bursting from the lush green mountain on the other side of the picturesque Río Grande de Orosi.

There are three trails here, two of them easy — the Oropendola, 1.2 km, and the La Pava/Catarata, 2.5 km — and then there is the Árboles Caídos, 2 km. Calvo warned that the “Fallen Trees Trail” is “muy fuerte,” a very tough trail, with steep changes in altitude.

I hiked all three in three hours and finished with my shirt soaked in sweat.

The first two were a walk in the park, with beautiful views of the river and waterfall (and tarantula). Both trails lead down to the clear, cold, fast river, where swimming is possible but not permitted, so if you swim, you do it at your own risk.

The third trail, Fallen Trees, turned out to be one of the most challenging I’ve ever climbed — steep, wild, muddy and buggy. I was continuously buzzed around the ears by big insects, and I regretted not having repellent.

Near the top I reached out to steady myself on a vine that turned out to be full of tiny spines, dozens of which became painfully embedded in my fingers.

I was greatly relieved when I realized I had reached the top and the rest was all downhill. Coming down was more like fun and less like work, though this was the only place where I lost my footing and fell. Up or down, it’s easy to slip in the mud or trip on the foliage just about anywhere here.

If you look up Tapantí on a detailed map, notice the striking absence of any roads or towns to the southeast. You could say Tapantí is the end of the road in Costa Rica.

“All this is the Talamanca Range, “said Arias. “We have Tapantí, along with Chirripó, La Amistad International Park and the Río Macho Forest Reserve. All these mountains are protected areas, all the way to Panama. That block of primary forest is the best protected in Costa Rica and one of the largest in Central America.”

And presumably most of this vast area would be extremely difficult to visit?

“Exactly, that’s why it’s so well preserved, because access is very difficult,” she said.

“History records that the Talamanca Range was the only part of the country that the Spanish couldn’t enter because of the toughness of the forest, the climate, the rain, everything. And that’s why we’re here, with these protected areas, because if we weren’t, who knows if they would exist?”

Getting there: With your own car, take the main highway east out of San José to Cartago and follow the signs to Paraíso and Orosi. As soon as you leave the town of Orosi, bear left with the main road, cross a little bridge, turn right and you’ll soon see signs for Tapantí. Four-wheel drive is recommended but not essential. You can also take a bus to Orosi and find your own ride into the park.
Hours: 8 a.m. to 4 p.m. every day, though birders wanting to enter at 6 a.m. can make an appointment by phone.
Admission: $10 for foreigners, ₡800 for Costa Ricans.
What to bring: Hiking boots, long lightweight pants, rain gear and insect repellent.