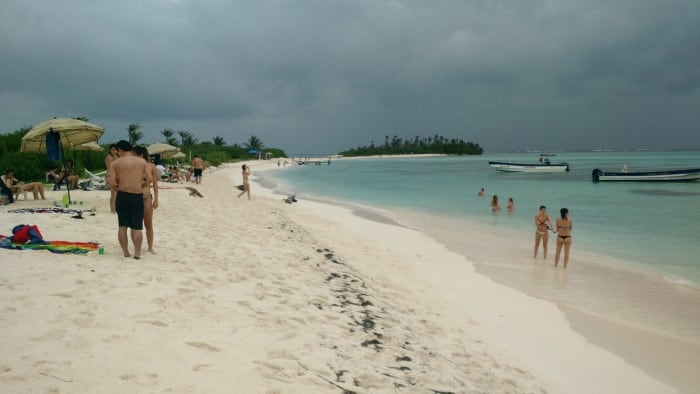 The view from Bolívar Cay, a Caribbean islet near San Andrés that belongs to Colombia but is much closer to Nicaragua. (Michael Krumholtz/The Tico Times)

SAN ANDRÉS, Colombia — A V-hull boat cuts through the open Caribbean Sea at a pace interrupted by uneven waters. From the tiny Colombian island of San Andrés, the boat carrying 30 tourists heads southeast to an even more secluded place that most maps can’t trace and where the edge of the world seems within reach.

Though rain has swamped the island all week, the dry silver clouds above give a short reprieve to the passengers crossing the “Seven-Colored Sea.” From the bow, a man wearing a blue life vest like everyone else spreads his arms and turns back around to the crowd.

“Everybody now clap your hands in thanks to the man above who has blessed us with this clear day,” said tour guide Rodolfo Correa Morales.

The choppy, 50-minute boat ride from San Andrés to Bolívar Cay throws travelers into a real-life screensaver, conjuring up images of “Pirates of the Caribbean” and “Gilligan’s Island” along the way. But the treasures in San Andrés and its nearby islets aren’t chests spilling over with gold and jewels. The value of this 12-kilometer stretch of reef-framed land in the middle of the sea is the sense of complete isolation and total tranquility that we think of when we use the word paradise.

When Colombia entered the peak of the drug trade in the 1980s and 1990s, San Andrés was used as a main port for drug trafficking, in part for its seclusion, but also because of its proximity to Central America. If you search below the waters around the island, you won’t find sunken Spanish galleons but shipwrecked drug carriers that were intercepted and discarded by Colombian naval forces.

Since the island was widely considered to be unsafe and marred by the drug trade, many North Americans avoided it in favor of tamer, and closer, Caribbean destinations like the Bahamas or Turks and Caicos. I had never even heard of the place until I moved to Costa Rica.

During my recent visit, I stayed on the southern edge of the island, which is far less busy than the northern end, home to shipping ports and the main town of El Centro, filled with all-inclusive resorts and duty-free shops.

Now that the general sense of safety has returned and much of the island’s identity comes from tourism, San Andrés has still been able to maintain a charming personality. It is not overrun with discotheques and seas of empty beer bottles, and there aren’t a lot of uber-aggressive street vendors or prostitutes tugging at your sleeve. The Caribbean island’s poverty, though, is easily seen by the shanty communities just off the main highway and the multitude of half-built, half-destroyed brick buildings that remain frozen in time between the coasts.

From its cozy and somewhat isolated perch in the south, Hostería Mar y Sol is a budget-friendly option for tourists who want to avoid crowds but don’t want to be shielded from the community in an all-inclusive resort. César David Ayala, part owner of the hotel, was born in Medellín but moved to the island this year after spending some time living in Miami. Ayala’s father Luis bought the property four years ago with his wife, and now the plantation-style house with adjacent guest homes is a well-organized and still-growing establishment that offers great local food for breakfast and dinner, as well as attentive service.

My first night on the island, after taking a cab to the hotel from the airport, I didn’t realize how few and far between grocery stores or restaurants were in the south. When I asked César if he could call me a cab so I could run to the store, he instead offered me a ride in his own truck.

Though technically situated in the middle of the island, it’s a mere five-minute walk to the beach on either side from Hostería Mar y Sol. To the northeast lies San Luis, a tiny beach town with coconut stalls and seafood restaurants selling the freshest catches. With marks from the reef formation that surrounds the entire island, it’s easy to see from San Luis why so much attention is paid to the sea’s colorful allure. Layers of bright turquoise gave way to shades of midnight blue, as a dark, almost purple storm encroached over the eastern horizon.

Snorkeling and scuba diving remain popular tours on the island, as the coral reefs and coves house a diverse array of marine life, including manta rays, tiger sharks and dolphins.

Minaldo Palmera, a 59-year-old taxi driver who has lived in San Andrés for more than 40 years, took me to the airport on the last day of my trip. As we made our way along the highway spanning the western coast, Palmera talked about life on the island, from the importance of tourism to the annual Green Moon Festival that had just concluded.

To our left we saw nothing but rain clouds blanketing the static sea, and as we rolled steadily north, Palmera looked back at me and smiled.

“I wouldn’t trade living here for anything in the world,” he said. “You can’t put a price on tranquility.”