Raiders of the lost tribe: The ruins of Guayabo 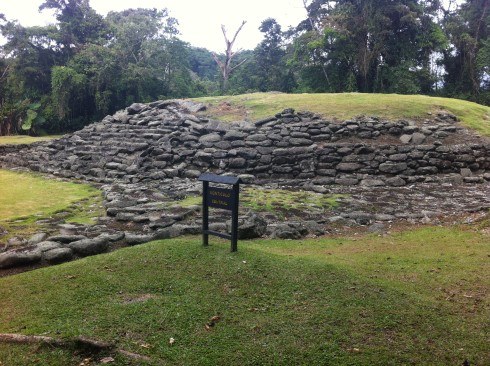 The central mound at Costa Rica's Guayabo National Monument is believed to have been the foundation of the wooden structure in which the leader of this civilization lived. (Karl Kahler/The Tico Times)

GUAYABO, Cartago — On the southeastern slopes of Volcán Turrialba, in verdant fields at the end of a rutted road surrounded by a jungle straight out of “Romancing the Stone” lies a mystery 3,000 years in the making.

Who built the rock foundations of the pre-Columbian ceremonial capital found here, with cobblestone roads, petroglyphs and tombs, aqueducts and water storage tanks that still work?

Nobody knows. Call this the civilization that time forgot.

Guayabo National Monument, the first archaeological site Costa Rica ever opened to the public, is no Chichen Itza or Tikal — chiefly because the conical wooden structures thought to have been built on these stone foundations are long gone. But it’s a fascinating glimpse into Costa Rica’s pre-Hispanic culture, where cacique chiefs and powerful shamans ruled over a peaceful agricultural people who were prodigious builders.

“The name of this culture, we don’t know it,” said archaeologist Rodolfo Tenorio, the jefe at Guayabo and administrator of the national monument. “It’s very complicated.”

The village was founded about 1000 BCE, he said, in the time of Israel’s King David, and was abandoned in 1400 CE, a century before the Spanish arrived, for reasons that remain a mystery.

“It was a society that we call a cacicazgo,” he said, meaning a chiefdom. “The leader was a cacique, the top political chief. There were also other figures, like the top religious leader, the shaman, the top spiritual representative.”

Which one of these men would have lived in the prestigious conical house at the center of the complex, with the long cobblestone approach, signifying the civilization’s true leader?

“We don’t know exactly which one of them was higher,” he said.

It’s one of many unknowns at this mysterious place, which leaves a lot to the imagination. In places, to a first-time visitor, the mounds of stones placed here by arduous human labor and impressive engineering could be mistaken for random boulders in a meadow.

The most impressive sight here is the long, flat, straight cobblestone road leading to the central mound (which appears to be in much better condition than the gravel road that leads here from Santa Cruz, on the northern highway between Cartago and Turrialba). But the sign in front of Calzada Caragra, the ancient cobblestone road, says it’s a modern restoration, 100 meters long, to represent an ancient road that once stretched 4-5 kilometers. Old photos of the road as it was discovered show that it was badly eroded by the passage of time.

Identical rectangular mounds appear on either side of the base of the road. A sign says: “These symmetrical structures highlight the power relations in chiefdom organizations. They have been called ‘checkpoints’ because they controlled access to the settlement. To enter, an individual had to climb a series of steps that were broad in front but short in height, so that he could look up while climbing. Then he climbed a set of steep stairs that led to the main approach. Undoubtedly this was a symbolic act meant to show respect, as he was entering the residence of the chief leader of Guayabo Valley.”

Tombs of important people were found throughout this complex and can still be seen today, though the graves were looted centuries ago. No gold or jade was found in the tombs, Tenorio said, though several artifacts of the civilization survived, included ornate metates, grinding stones that are now on display at the National Museum in San José.

One artifact that remains in place is a medium-size boulder with petroglyphs on both sides, believed to represent a jaguar and some kind of lizard or amphibian. “The relationship of the two animals has been construed to mean a symbolic alliance of peoples, groups or high-ranking persons interacting in the Guayabo region and surroundings,” the sign says.

The farming tools found here suggest that these were a peaceful people dedicated to agriculture, growing mostly roots like yucca.

“We found axes and agricultural tools that also could have been used for fighting, but not many of them, and that’s why we don’t think these people were warriors,” Tenorio said.

Nor do archaeologists believe the people here captured slaves or practiced human sacrifice, like their Mayan neighbors to the north.

“It’s not common to find the practice of slavery in the pre-Columbian cultures of Central America,” he said. “That primarily came with the Spanish.”

But make no mistake: The chiefs who ruled this place were no wimps.

“The great monuments at Guayabo reflect a centralization of political and religious power, suggesting this was the capital of a chiefdom,” reads one of the many informative (if speculative) signs along the trails. “Power must have been exercised as a result of the main leader’s sacred investiture with warrior support. Territorial dominance must have involved settlements with varying importance under Guayabo rule. Cobblestone roads suggest this was a ceremonial center visited by people from other communities and also connected to subsidiary sites and lesser chiefdoms. The distribution of sites with architectural works shows this chiefdown ruled a 15-kilometer radius.”

Among the many unknowns is whether this civilization migrated here from the north or south, said Giovanny Soto, who works at Guayabo promoting ecotourism. Similar ruins were found to the south in Antioquía, Colombia, he said.

“Archaeology is extremely expensive,” he said, “because everything has to be removed piece by piece.”

What does seem clear is that Guayabo (named after a farm established here around 1850), was the administrative and spiritual center of a larger array of villages that would have supplied the labor to select, carry and place the stones that built the homes of the chiefs, plus the roads leading up to them. In 2009, Guayabo was declared an “International Historic Civil Engineering Landmark” because its roads, walls and water channels “represent remarkable civil engineering achievements by pre-Columbian civilization.”

Guayabo is located 85 km east of San José — at least a two-hour drive if you don’t get lost, possibly four if you do (keep a sharp eye out for the brown signs saying “Monumento Nacional Guayabo”). It’s a long but scenic drive on a good, winding highway, with great views of the Central Valley, that ends with an 8-km slog on a steep and rugged gravel road. Four-wheel drive is strongly recommended, if not essential when rainy.

Admission is just ₡3,000 ($6), and there’s an easy trail through pristine rain forest to the archaeological site, with lots of information posted on signs along the way. To learn even more, hire a guide or join a tour group.

And if you happen to stumble on an artifact that reveals the name of the mysterious civilization that lived here, please let the rest of the world know!

Getting there: With your own car, head east from San José on the main Hwy. 2 past Tres Ríos and north of Cartago, following the brown signs for Parque Nacional Volcán Irazú and Monumento Nacional Guayabo. Don’t miss the turn-off to the right on the road to Irazú where there is a large statue of Jesus and a small sign pointing the way to Guayabo on the right.

What to bring: Be prepared for heat, cold, rain, mud and insects.