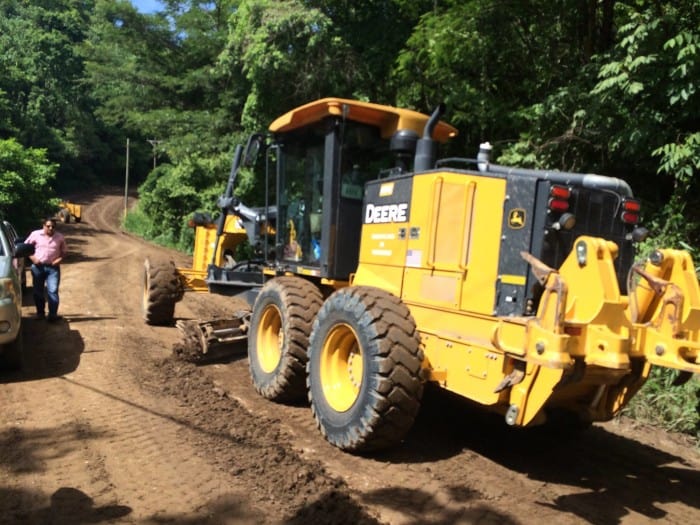 Amid a flurry of protests from local community members, the Costa Rican government began roadwork Wednesday on Route 160, which connects Paquera to Playa Naranjo in the Nicoya Peninsula.

The Public Works and Transport Ministry (MOPT) released a statement today to confirm that the emergency intervention had begun. Alejandro Molina, the director of the ministry’s public works division, said Thursday that workers would fill ditches, repair broken water pipes and configure the road to be suitable for transport.

Last week protesters blocked roads and started fires, and some threw glass bottles at police officers. Ten people were reported arrested. Protesters have said the government never made good on earlier promises to repair the road and that conditions make it extremely dangerous and costly for locals to commute every day.

The statement said the ministry was considering placing a layer of special asphalt on a two-kilometer stretch near a populated area.

This is one of many road issues that President Luis Guillermo Solís has on his plate, as private chauffeurs parked their cars in front of Casa Presidencial in Zapote Wednesday to protest the government’s decision to limit Special Taxi Service permits. The nationwide protests also included blockades on Route 10, Route 32, and Route 34, among others.

The government has also been busy with the flooding emergency in the Caribbean, which has led to the closure of Route 32 on four occasions in the past few weeks. The highway is the main artery between the Central Valley and the province of Limón but it has been heavily affected by landslides due to the heavy rains.

In Nicoya, protests over road conditions forced the popular gulf ferry connecting Puntarenas to Paquera to close down on July 1.