Oceano Boutique Hotel is a quiet oasis in Jacó 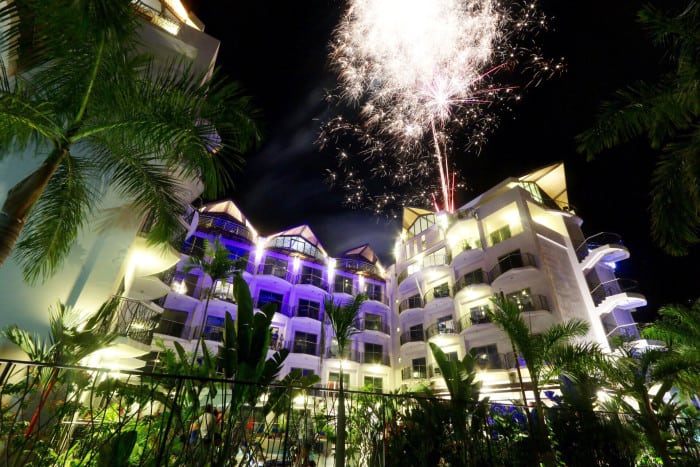 JACÓ, Puntarenas — Past the crowded beach and beyond the clamor and noise of Jacó’s main strip, a modest gem has popped up in relative anonymity.

Oceano Boutique Hotel, which opened just six months ago beneath the shadow of its celebrated neighbor Croc’s Casino Resort, may not have the ideal beachside location, but that is exactly what makes it so attractive. Families traveling for pleasure or professionals on the road for work can find a clean and relaxed atmosphere that offers a variety of suites of condos.

I stayed at the hotel while covering the recent Grand Reef Final in nearby Playa Hermosa. After procrastinating with my hotel reservations until the night before the event, I was worried that I would get stuck in Jacó at a rundown hostel or all-night party center. But, for around $90 per night with taxes, the standard bedroom option at the Oceano was both quiet and cost-effective, a comfortable place where I could get work done.

Including a marble-walled bathroom, a queen-sized bed, and a balcony with a view of the mountains to the east, my room was nicer than many places I’ve stayed in Costa Rica for similar prices.

Oceano, which is on the same street as owner Itai Barzi’s other popular creation, Taco Bar, is a nice change-up from other Jacó hotels in that it’s modern but low-key. Besides the standard bedroom, which is a nice option for couples or business travelers, there are a variety of one- and two-bedroom condos, which include full-service kitchens, dining rooms, laundry machines and even private spa pools for the more expensive choices.

There are also two penthouses from $400 to $500 per night, which feature either three or four bedrooms and up to four baths, amid high ceilings and spacious rooms.

With its laid-back vibe and elegant pool area, in the middle of the horseshoe-shaped building, Oceano seemed like a great place to bring kids in Jacó, where parents may worry about the seedier sides of town.

The only downfall was consistent problems with the Internet and television connections. One night, I needed to watch the television so I could cover the Costa Rica men’s football match against Mexico. A worker came up to reset my signal-less cable box an hour before the game, but just as the match started, the cable froze again.

I ran down to reception, since there was no phone in my room to call, and asked if the guy could come back to fix the cable again. He tried, bringing a whole new cable box with him, but 15 minutes later the signal failed again.

The next day, the Internet was down during checkout, so the receptionist couldn’t print my bill. I was pretty dependent on the Internet to do my job, but all weekend it had gone on and off.

But these connection problems with Internet and cable are fixable issues for a young hotel that offers such a diverse set of amenities. For me, there was maybe no more appreciated inclusion than the electric air conditioning in the room to cool you down after a day in muggy Jacó.

The hotel has a pet-friendly policy, in case you want to bring a dog to the beach, which is about a 15-minute walk away from the hotel. It may feel a little off the beaten path, but the hotel’s location on Calle Lapa Verde puts you in a perfect spot, with immediate access to the main avenue in town but also just enough distance from obnoxious crowds.

Though it’s young, Oceano shows the potential to be one of Jacó’s best options for families, couples and professionals looking to have a relaxed vacation in Costa Rica.

Getting there: Take Route 34 to Jacó, take the southern exit to Avenida Amapola, head north on Avenida Pastor Díaz, and then take a right onto Calle Lapa Verde. Oceano Boutique Hotel will be on the right-hand side in 500 meters.
Price: I paid $290 for three nights in a standard bedroom without breakfast.

It is The Tico Times’ policy to conduct reviews anonymously. If we have reviewed your establishment and you disagree with our assessment, you are welcome to comment on the article, and if you wish, request a follow-up review.